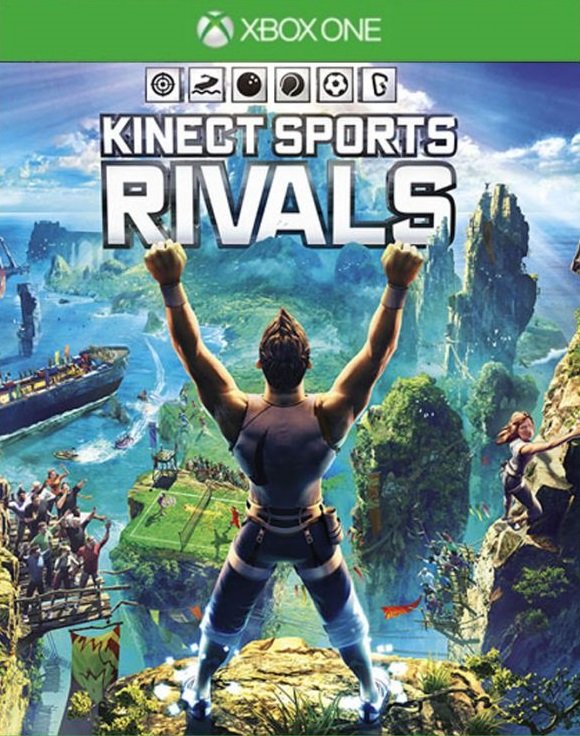 Imagine that it’s a mild summer’s afternoon, and you’re about to take off for a vacation. You board your flight, Oceanic Airlines Flight 816, and take off for the wild blue yonder. Like the poor souls of Oceanic Airlines Flight 815, who crash on the Lost Island, you also find yourself stranded on a strange tropical island. The main difference is that the people of the Lost Island were worried about time travel and smoke monsters; however, you find yourself on a strange island full of people who are constantly competing against each other in six different sports.

I’ll admit that this introduction to Kinect Sports Rivals is completely fictional, but it’s better than what the game offers. Especially since Kinect Sports Rivals never offers you any reason for why you’ve arrived on this strange island that is home to three extremely competitive “tribes” of athletes. When the game starts, you are literally thrown to the wolves of Wolf Clan, Viper Network and the Eagle Legion.

Once the minimal introductions are over and you finally start participating in the beautiful game, some ten pin, or whatever the world will come to call virtual shooting ranges, the true calibre of Kinect Sports Rivals is shown. Kinect Sports Rivals is basically a mini-game collection made up of six sports themed games, and they are all of a high quality level.

When it comes to Kinect Sports Rivals, the quality is so high that it doesn’t need to be part of your decision making process. Instead the choice depends on what you consider a sport to be. For example, the soccer mini-game isn’t actually soccer. It plays more like the foosball table at your local sports bar. The Target Shooting mini-game basically comes down to pointing your finger at the screen and using it to scroll a crosshair shaped cursor over the target icons in specific patterns.

On the bright side, the other four games feel more like actual sports to me. Bowling, Rock Climbing, and Tennis are all extremely interactive experiences. I would not call them exact copies of the real thing, but it’s easy to compare them to the mini-games that made up the critically acclaimed Wii Sports pack-in for the Nintendo Wii.

The final mini-game, Wake Racing, actually reminds me of another sports game altogether. I was getting a serious Wave Race 64 vibe off of my time with the Wake Racing mini-game in Kinect Sports Rivals, and that is truly the highest praise I could ever give any videogame or mini-game that involves jet skis.

Although I should point out that none of the mini-games in Kinect Sports Rivals are clones of the various games that I’ve compared them to. The biggest difference is that each Kinect Sports Rivals mini-game has short term modifiers (or power-ups in the game’s parlance) that come in three classifications: red offensive powers, blue shield powers, and purple speed/endurance enhancements. They’re there if you wish to use them but, as a family friendly mini-game collection, you won’t be shocked to know that Kinect Sports Rivals isn’t that challenging.

Now all of that said, the mini-games are not the impressive part of Kinect Sports Rivals. They’re all solid experiences to be sure, but they’ve all been done before in Wii Sports, Wave Race 64, or other titles. On top of that, they’ve all been done at this high level of quality, so I find it hard to write home to my mother about them. To my surprise, the Kinect camera ended up being the true all-star athlete of this product.

The Kinect will impress you early and often, but it will start with its facial scanning software. Before the fun in the sun happens, you have the option to use the Kinect’s cameras to make your own Kinect Sports avatar. I’ve seen it scan three different people, and every time the results were impressive. Each avatar is built by having the Kinect scan your face for its specific 3D shape, your skin colour, hair colour, hair style, if you wear glasses, if you have facial hair, and your physique. The results are usually fudged in order to give everyone an athlete’s physique and the chin of an alpha-male, but these Kinect Sports clones usually do look like their original donors. The greatest deviation I found was actually with my own avatar. It did not look like me when all the scanning was over, but it looked exactly like my father.

On top of that,The Kinect is supposed to be able to track you while standing or sitting when you play Kinect Sports Rivals, and every time I tried the Kinect in a sitting position it continued to track my body movements. My avatar would even appear to be sitting if I played the soccer mini-game while sitting. To push the Kinect to its limits, I tried playing it while lounging Cleopatra style on my couch and it worked most of the time. Most of the time may not sound impressive, but imagine me using the Kinect while my legs were up on my couch and my feet were point at the camera. That fact that it would work at all makes the Kinect the Kinect Sports Rivals all-star.

To my surprise, the only time the Kinect stopped working completely is when my dog would run around the room. Since the Kinect is supposed to be able to track multiple people, I was surprised that a knee high puppy could distract the camera so easily. Perhaps it is unfair to hold that against the Kinect, but it is something you may want to consider if you have cats or dogs.

Actually, the only issue that I feel the Kinect camera earns is the issue I experienced trying to navigate the game’s menu system. The standard for selecting menu options with the camera is to hover your hand over that option for a long period of time. In Kinect Sports Rivals, you hover your hand over an option, but then you pull back your hand and press it forward. I always felt like I was pumping a shotgun when I was doing this, and the issue is that my hand would always slip off the menu option I was trying to select. I could never keep my hand still while doing this pumping action, and only after at least 5 attempts would my choice be selected. Luckily, the controller works for most menu options, but there are a few times were the pumping hand gesture will be required.

Overall, I enjoyed my time with Kinect Sports Rivals. The mini-games in this collection have all been parts of other games, but they’re done very well here. I was a little disappointed by how Soccer and Target Shooting was designed, but the Kinect camera’s impressive functionality picks up the slack and means that the game can be fun for both young and old.

You can check out some game footage from the CGM crew here, it’s always more fun in Multiplayer!

I’ll admit that this introduction to Kinect Sports Rivals is completely fictional, but it’s better than what the game offers.
REVIEW SCORE
7
File Under: Kinect, Microsoft, Rare, Xbox