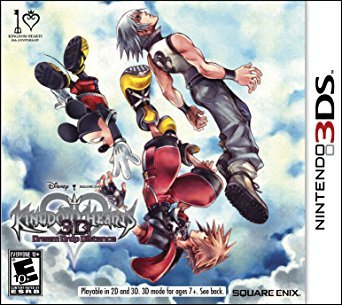 Disney and Final Fantasy. A combination of the most accessible icons of children’s entertainment with possibly the first franchise that required gamers to sacrifice most of their life to properly complete the controller-driven quest. Let’s face it, that’s an odd combination that really shouldn’t work.

First off, this is an absolutely gorgeous 3DS title with some fantastic level and character designs playing off of classic Disney films. It’s a nice mix of the iconic 2D designs in 3D forms with levels paying loving homage to vintage classics like Fantasia and Pinocchio as well as more recent efforts like The Hunchback Of Notre Dame and Tron Legacy. It’s clear the designers had a deep love of the Disney universe and push the horsepower of the handheld system almost as hard as Capcom managed on Resident Evil.

And oh boy, will you ever battle. Kingdom Hearts may have imaginative worlds and familiar characters to tickle your pleasure centers as you work your way through the epic quest, but for the most part you’re going to be smashing up the adorable villains known as Dreameaters who randomly pop up whenever you go. Combat has all the staples of previous franchise entries like the smashy-smashy keyblade attacks and a drop down menu with magic attack commands that you can upgrade and customize to your heart’s content.

Describing the plot is pointless because to be honest, outside of the Disney movie based level tasks, it’s difficult to make much sense of this convoluted mess of a mythology. It all has something to do with collecting magic keyblades, I guess. With 6 games of backstory that the folks at Square Enix desperately try to catch players up on with endless flashback cut scenes and long essay like text-descriptions, making sense of the narrative is an almost futile task. It’s best just to focus on the journey of the two heroes Sora and Riku and the occasional bursts of emotion amongst the Disney characters that pop up.

To read Phil’s full review of Kingdom Hearts 3D: Dream Drop Distance pick up the August/September issue of Comics & Gaming Magazine coming soon to Zinio and a newsstand near you.

There’s a lot to love and a few things to loath about Kingdom Hearts 3D: Dream Drop Distance (the title falls into the “loath” category) and thankfully there are enough good things about the game to make it an easy recommendation for fans of the series and genre.
REVIEW SCORE
8
File Under: Kingdom Hearts