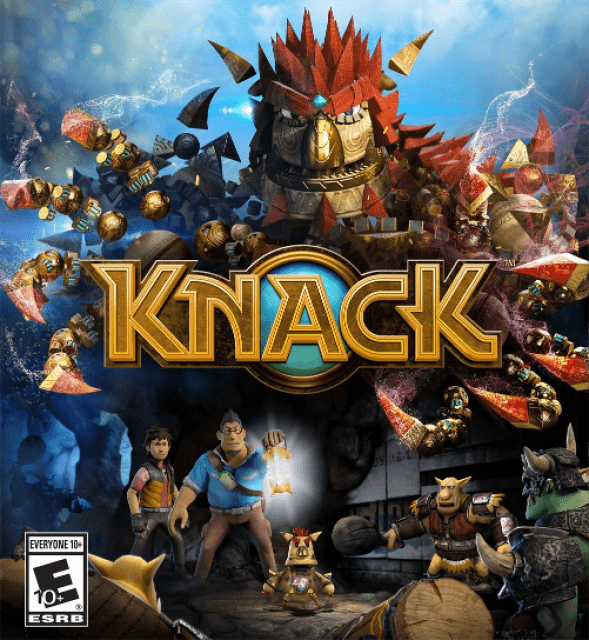 As an early PlayStation 4 adopter, there weren’t many games for me to sample in order to get a good feel for what the system could actually offer beyond futuristic shooters, racing, and sports. Knack seemed like the quirky gamer’s choice, with its colorful cover and marketing that likened it to Katamari Damacy or some equally whimsical adventure. I jumped at the chance to play something other than a triple-A blockbuster.

Perhaps I should have stuck with the blockbusters, as they offered much more of a spectacle and overall delight than Knack did. Knack’s problem is its insistence to stay mired in archaic conventions that do little to propel the genre forward. When Sony hinted at wanting to return to a more “innocent” time in gaming, I never could have imagined this was what they meant — clunky mechanics, an uninspired narrative, and characters who looked as though they were ripped straight out a budget CG-animated film.

This mediocre tale that unfolds via linear beat-’em-up segments in which you follow a strange monster created by an inventor known as “the Doctor” — the titular Knack. Knack is on the warpath to protect humanity from the oncoming goblin threat — goblins? — and joins forces with the austere security bots of billionaire Viktor in order to stave the malevolent goblins off and out of the humans’ hair for good. If you’re bored simply reading this recounting, it doesn’t get much better in-game. A motley crew of characters like the Doctor’s assistant Lucas and his uncle end up pursuing a secret ancient power that delves into territory so silly it loses steam less than halfway through. It’s so by-the-book it hurts — but with gameplay to sort through, you’d assume this would be something simple to bolster.

That’s not the case, unfortunately, as the game is a frustrating amalgam of dated platformers like Super Mario Bros. and licensed movie games. It moves at a plodding pace, leading you from area to area as you fight off waves of advancing baddies to continue to the next. Lather, rinse, and repeat: grab robots and goblins, beat them to a bloody pulp, and then go on about your business.

The unmovable camera is frustrating enough to contend with without a seemingly endless parade of enemies running in to irritate you, and by the time the force field has dropped to allow you into the next area, your patience has been shot. The platforming segments slipped in between each brawl are incredibly basic, scattered throughout heavy-handed environments like forests, lava-laden areas, and frozen tundras. Yawn — we’ve seen all this before! Bring on something impressive, already!

Knack himself, while cute in an Iron Giant sort of way, has a few tricks up his sleeve, but they can’t make up for the lackluster game built around them. He can absorb relics and other items to grow in size, earning new abilities along the way. There are “a-ha!” moments, like when you were previously unable to roll over a larger item in Katamari Damacy and suddenly you pick it up with no trouble (that’s what it feels like to conquer tougher enemies), but there’s nothing interesting that comes of this ability. Knack collects crystal shards, which allow him other augments throughout the game, but none of these gameplay ideas are exactly exciting.

Perhaps it wouldn’t be such an issue if you weren’t finding yourself forced to replay specific segments over and over, thanks to some particularly cheap deaths that feel like little more than obnoxious roadblocks on the way to making Knack last a few hours longer than it should.

There’s little in the way of originality or impressive visual prowess in Knack either, though it can be awe-inspiring when you note Knack’s body is indeed comprised of individual relics that are rendered on their own. Environments, levels, and the same bland and recycled corridors, however, are no more entertaining than games from the previous generation, and given there are no truly original character designs here, it’s definitely not the game you want to choose to represent your shiny new console purchase.

It’s clear Knack was brimming with some interesting ideas at one point, but anything that may previously have given it any kind of real personality was either swapped out for elements that were meant to make the game much less of a “modern” platformer and more simplistic, as Sony seems to have intended. Unfortunately, it’s bland, repetitive, and uninteresting

Knack is certainly not a game you’d want to introduce your brand new console purchase with, and though it’s playable enough, it’s not exactly something you’ll want to.
REVIEW SCORE
5
File Under: Platformer, PlayStation, SCE Japan Studio