LEGO Pirates of the Caribbean: The Video Game (PS3) Review 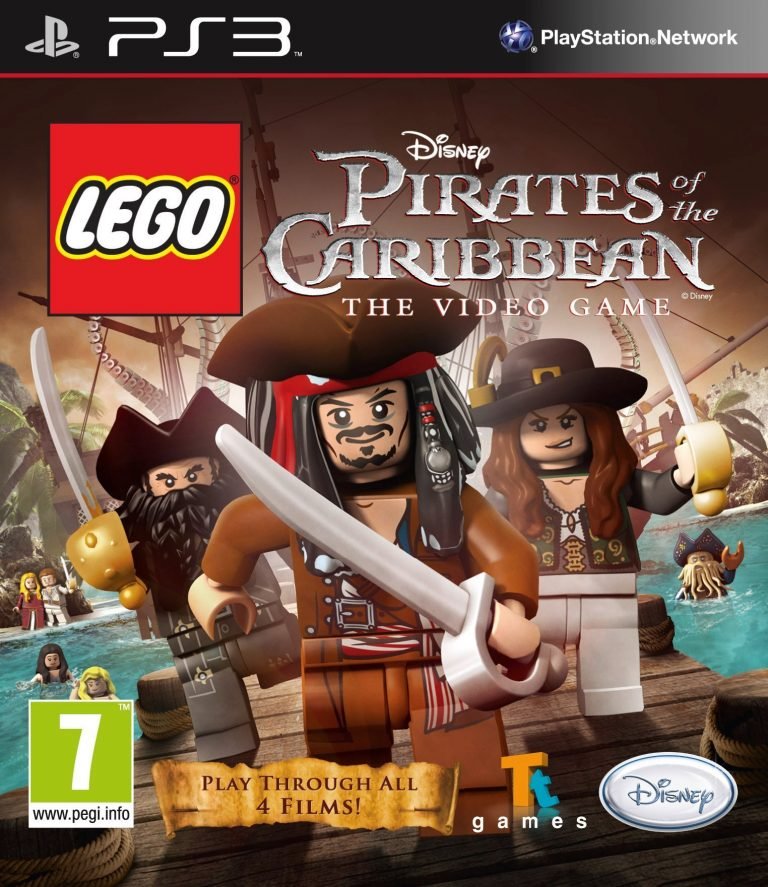 Traveller’s Tales has turned “LEGO-fying” major movies into something of a cottage industry, and they are back with yet another obvious turn. The Pirates of the Caribbean franchise is popular, family friendly and tackles one of the current popular caricatures of recent years, the eye-patch wearing, peg leg toting, parrot feeding pirate. Throw in some big budget action sequences and Johnny Depp, and you’ve got a potential game merchandise property that will leave most peope surprised at the fact that the LEGO touch didn’t happen to it sooner.

There’s not much to talk about in terms of the story. The game—like previous Traveller’s Tales adaptations—takes LEGO mini-figs and retells the story of the film franchise with slapstick, comedy twists. Here, all four Pirate films are represented starting with the original Depp/Bloom/Knightly trinity in the first three to the new Depp-only headliner that is the recently released fourth film. All the major plot points of each film are hit with the usual Traveller’s goofiness that has served them well in past titles like the Star Wars and Harry Potter games, so if you’re young, or young at heart, that same sense of safe whimsy is present here.

As with other LEGO titles, this isn’t a top-tier graphical powerhouse; the nature of the simple LEGO blocks lends itself well to that. However, there’s a surprising amount of decent art direction going on, with good lighting, reasonably detailed textures, and even a few frills like motion blur. The frame rate is steady, but there’s some noticeable screen tearing here and there, an unexpected disappointment considering this game isn’t exactly pushing the visual envelope. It’s a serviceable game in the graphics department, but considering the series has always been aimed at a younger crowd, it doesn’t really need to wow discriminating players with a hyper-attentive level of detail. There’s also an option to play the game in local co-op with an interesting, but ultimately problematic presentation. Most co-op games simply split the screen either horizontally or vertically for either player from beginning to end, but here, as long as players are close to each other, they “share” the same screen, and a split only occurs once they move away from each other. The split, however, “follows” the players, so if one character heads northwest, while another heads southeast, a diagonal split will form. Conceptually, it sounds like a good idea, but in practice it feels disorienting and it’s easy to get lost once it occurs. That one visual quibble aside, what’s here is not a beautiful game, but it’s not bad looking either.

The audio side of the game is similarly in line with past Traveller’s Tales games. As to be expected, the game borrows heavily from the soundtracks of the films represented, and this works enormously well to carry players into the LEGO-fied conceit of the movies. Generally speaking, the rest of the sound is safe, but not inspired. Don’t expect much use of the surround speakers in the same vein as a first person shooter. The emphasis on sword fighting and puzzle solving with LEGO blocks also tends to mean that aside from the occasional cannon fire from ships, there’s not a whole lot of work for the subwoofer to do either. There’s no dialog to worry about either as the slapstick nature of the story restricts human voices to grunts and squeals as various comical/terrible things happen to the mini-figs.

At its core, LEGO: Pirates of the Caribbean: The Video Game is a palette swap of previous Traveller’s Tales games in the LEGO franchise. All the conventions established in previous games are here; the family friendly tone, the co-operative local multi-player, the invoking of movie plots with a comedy twist and the combination of puzzle solving and simple combat.

The game is divided into four sections, each section consisting of five chapters that roughly lay out the plot of each movie. The game begins with the LEGO revisitation to The Curse of the Black Pearl and shows off the basic gameplay mechanics. Players—either singly or with a friend in local co-op—can choose from a variety of characters that vary from chapter to chapter, the one constant being that they have different abilities that will be required to solve the various environmental puzzles scattered about the chapter. Chapters consist of areas with various obstacles that need to be overcome, from giving a non-player character a desired item before being able to proceed, to opening up locked doors, or assembling a necessary gizmo from scattered LEGO blocks. In this sense, the game takes on undertones of the adventure genre, as the puzzles can sometimes be real head scratchers, asking players to use specific abilities, such as Jack Sparrow’s compass, which hones in on the heart’s desire—or in this case, hidden items—and combining them with other character abilities before being able to proceed. There’s nothing in here that is going to permanently stump a player the way some of the more fiendish adventure games of the past have, but be aware that for younger players the complexity of some puzzles may catch them off guard. There’s also a little bit of swordplay, but combat isn’t the focus of the game, so it’s a simple, button mashing affair that gets the job done quickly and is quite forgiving with younger gamers.

A central hub is also available for players that acts as both a gateway to choosing previously conquered story sections in free play, and a level in and of itself with its own puzzles that require solving. It’s here that the replay value of the game really begins to show itself. The LEGO games have always been monstrous collect-a-thons that tease players with treasures and hidden items impossible to gather with the available story characters alone. It is only by revisiting the levels in free-play, with the ability to choose any of the available characters acquired, that certain doors can be blown open, crystals shattered with singing, or chutes crawled into with dogs that allow completionists to finally access all the hidden items strewn about.

It is, as stated at the beginning, like every other LEGO game released. There’s nothing inherently broken with this game, but it’s a formula that Traveller’s Tales has religiously stuck to. If you’ve never played a LEGO game before, this is as good a place to start as any other title in the franchise. If you’re merely in the mood for a decent piece of interactive movie merchandise to enjoy with your family, this is definitely a safe buy.

At its core, LEGO: Pirates of the Caribbean: The Video Game is a palette swap of previous Traveller’s Tales games in the LEGO franchise.
REVIEW SCORE
7
File Under: Action, Adventure, LEGO, PlayStation