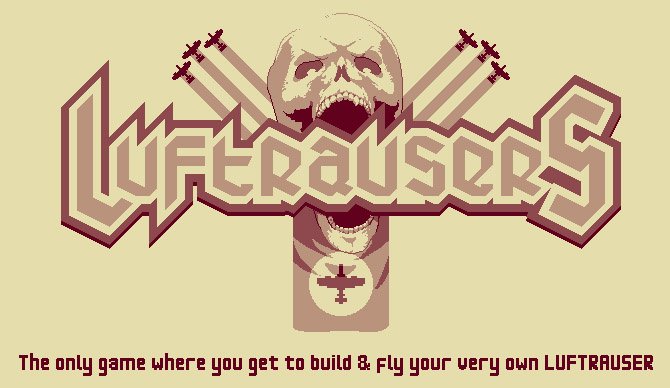 Well now, this looks familiar. It seems a fair few independent developers are finding success with recreating, improving, and iterating upon old creations of theirs. Often times these are student or hobby projects written for browsers. The immensely popular platforming game Super Meat Boy, for example, began life as an Adobe Flash release on Newgrounds. If memory serves, the strange little arcade flying game Luftrauser (singular) appeared on the same entertainment website a couple years ago. Now Vlambeer, the duo responsible for developing the thing, have looped around to give Luftrauser the proper commercial treatment. And to add a supplemental “s” to the title.

Perhaps Vlambeer could only afford imitation Luftwaffe. Looking almost-but-not-quite exactly like enlistees of the World War II German air force, a trio of characters seems to expect you to know exactly who they are. The officer with the dead eye silently throws you a sharp salute as your aircraft is flung from its submersible hold. He clearly regards you as an expert Rauser. In my case, he was wrong.

Your pixelated plane sports a perfectly vertical liftoff. Reminiscent of the old cabinet arcade game Asteroids, you’re tasked with surviving a two dimensional field increasingly littered with dangers hankering for a blasting. Presumably, Luftrausers has you facing an equivalent of the Allied forces rather than space rocks and aliens. Unlike Asteroids‘ triangle, though, your craft is bound by gravity. Sandwiched between a cloud barrier and the sea, the forward arrow key fires carefully timed thruster burns that will see you arcing through the sky and dodging enemy fire with all the aeronautical grace of a rock skewered on a sputtery bottle rocket. After setting yourself in motion, your nose and the guns staring down it, with left and right arrow keys, can be spun with zero regard for the wind tearing at your wings. Your sole other input is the fire key, letting you spray punishment in any direction, arbitrary to your trajectory, like some sort of terrible fireworks pinwheel.

I don’t think airplanes work this way, but I’m starting to wish they did. Top Gun certainly would have been more interesting.

Luftrausers’ aesthetic can best be described as a silly yet ever so slightly death metal caricature of the World War II German war machine. Imagine the humorless Indiana Jones style of Germans, harshly formal and perennially ticked off (unlike the Lucas and Spielberg films, though, Luftrausers never hints at any Nazi party involvement). There’s little more than some simple menu designs, a few characters, and the music to convey its theme. Despite this, Luftrausers manages to make you feel like the ace up the sleeve of some strange fringe branch of a warmongering nation’s military.

Post mission, the sinister scientist type will treat you to play style altering weapons, bodies, and thruster types, and eager readjustments of spectacles. The former three are unlocked by building scores and completing part-specific objectives like shooting down a quota of enemies in a single free fall. Each unlock serves the additional function of bearing alternating riffs on the eminently memorable main musical theme.

If you’re feeling brave, you can visit the scary lady with the eye patch for some career statistics. Why don’t any of these people have a properly functioning set of eyes?

It’s a very simple game – like it’d be right at home inside an arcade cabinet. Boost, shoot, rotate, try again. A five second demonstration could likely encapsulate all that the game will offer. As per the developer’s style, Luftrausers deftly tackles just a few elements and scoffs at the notion of complexity. The effects of gravity and momentum possess that satisfying “feel” that is so difficult to describe. Shifts of perspective highlighting the destruction of large targets, grungy and coarse explosion sounds, and the visual pop of bested fighters all contribute to a tight, rewarding set of feedback cues. And that finely understated camp of the art managed to elicit a few giggles.

This one’s great for short bursts of fun. It’s a desktop time waster of the highest caliber, ready to stop gaps in your daily business and take its leave with little fuss. Unlike your productive drive, Luftrausers will always be there for you. How much a single delicately tuned toy is worth to you, however, is a question you’ll need to answer for yourself. While Meat Boy offered a thick stack of stages to justify its larger price tag, Luftrausers stands relatively gaunt. I find its ten dollar release price questionable, considering the spartan nature of its feature set. Still, while some are bound to be disappointed by its narrow breadth, but there’s no doubting that Luftrausers accomplishes what it set out to do with utter competence.

Presumably, Luftrausers has you facing an equivalent of the Allied forces rather than space rocks and aliens.
REVIEW SCORE
8
File Under: Action, Arcade, Indie Game