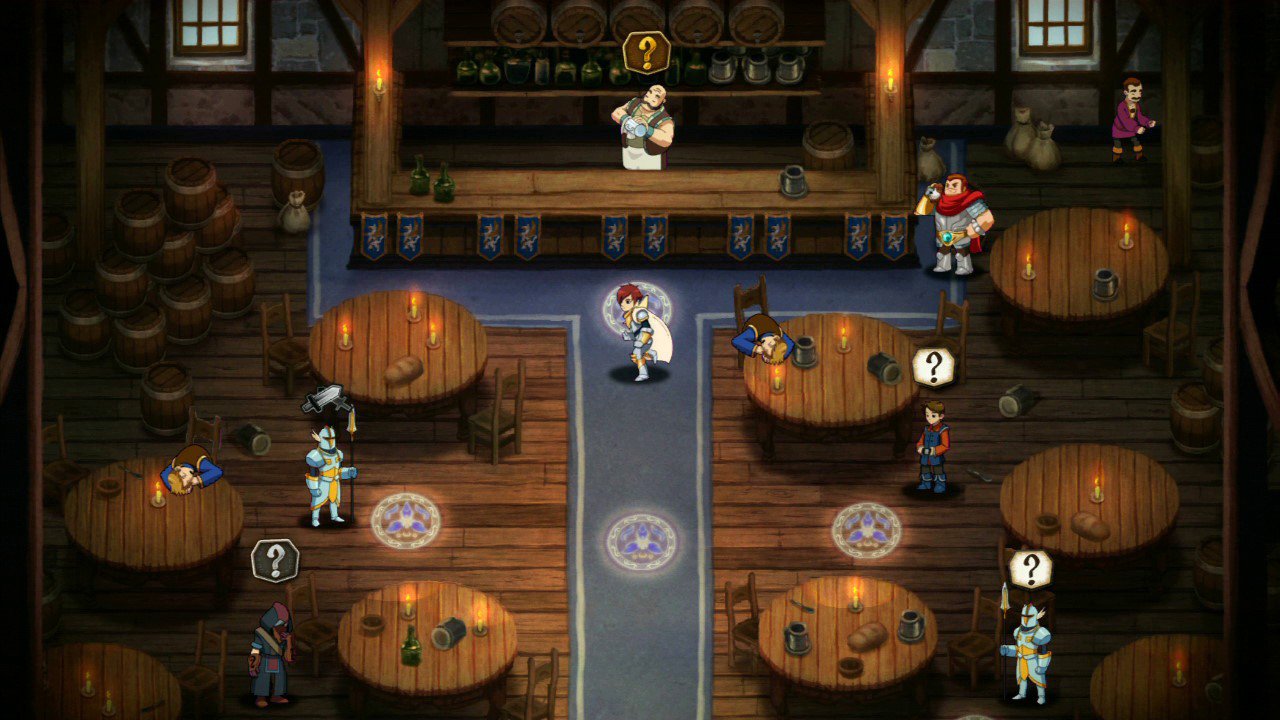 In late 2009, Capybara Games released Critter Crunch, a much talked about gem of puzzle gem games, which not only showed an imaginative force in the small studio but also that the old genre still had a lot of kick for the imaginative. Within the same gasp of time they also gave us Might & Magic: Clash of Heroes, which altogether signed off that perhaps Capy had a secret recipe for the formula that they aren’t sharing with anyone else. Now after much request the game that went under way too many radars has surfaced for an HD remake on the console market. If there are changes, what are they? If there are changes, are they good? If you wouldn’t know either way, have you been sleeping under a gemstone?

Roughly taking place in the Might and Magic world, Clash of Heroes begins when five children of Ashan and their influential parents meet in the middle of the woods to discuss the Blood Moon Eclipse and the Blade of Binding, one being what stopped the other from becoming a demon driven apocalypse. Tragically the meeting is a trap, devised by unknown hands, leading to the death of some of each race’s strongest leaders. With those guardians killed it is up to their kids to stop a hell-born massacre from reoccurring. The children being split up and the kingdoms of Ashan rifled with strategic confusion and corruption, their quests will not be easy. The story is passable, if not the real draw, but Capy’s knack for absurdly quirky dialogue ensures that whatever you’re reading, it’s most likely charming.

To leave it at a puzzle-RPG hybrid would be not only underwhelming the execution but it would also mislead you to think Clash of Heroes as a basic Puzzle Quest riff. Where Puzzle Quest was where two addictive genres met, Clash of Heroes is where they merged. If you enjoy grid based strategy and war-bears then Clash of Heroes is your ticket to rainbow paradise. Battles are played out on a two sided board, soldiers and units are activated by lining them up in threes, vertically to attack, horizontally to defend and two/four behind special units to activate their ability. There’s a great sense of being eased in, while things start out simple enough intricacies of the concept flesh out, like linking units, merging units, earning more moves through combo chains, the functions of the different races and the best way to utilize each special unit will never lose you, even if you usually find yourself unable to finish a Monster Manual without taking a nap. Bosses, events and puzzles break up the standard combat, requiring you to adapt to specific unique new patterns. The only monotonous factor is having to start from scratch at the beginning of each chapter, having to utilize the bare bones of the combat system every time you unlock a new class. Then again, when a game is over 30 hours long and that’s the only complaint of repetition then someones done a bang-up job otherwise.

What’s great about the game at its core is the satisfaction of the strategy. Be it through the item you use to boost yourself, units you’re more fond of or if you go for bulk over bruisers Clash of Heroes, like all great strategy games should, eventually feels personalized. But if you had played it since 2009, you’d already know that.

The two largest changes to the console version is it’s audio/video make-over and a heavier focus on multiplayer. There have been some minute changes made to the core and campaign, but they seem to be done in the interest of multiplayer mechanics and achievement hunters. The visuals, being the most obvious alteration, will strike some better than others. For good, there is a lot less ambiguity in both colour and styles. There were times on the DS version where a loss of concentration could lead to mislead combinations of the wrong units, which has thankfully been rectified. Ambiguity in general has also been lifted, so some troops are simply more obvious to identify (so those ARE gremlins with rifles.) At the same time, some changes feel a little off. Animations are much longer, especially for special units, and they don’t feel showy enough for extended sittings. While the pixel style may have been the root of the ambiguity, the style they’ve swapped to doesn’t much better sync with the fantasy-anime inspired aesthetic, some graphics may come off as a smidge generic. The wide plane has a lot of dead space, while they’ve bookended battle sequences with really gorgeous art, I can’t help but feel it may have been better used when numbers and details feel cramped on a big screen.

While a lot of those grievances may befall personal taste, the other tweaks and additions aren’t so gray. Unless you enjoy complaining about extended multiplayer modes. You weirdo. While multiplayer was available on the DS it only felt like a necessity of the times, now it’s received a bit more attention for the console outing. Versus, leaderboards and even coop for both local and online bouts means you can tussle with strangers and couch chums alike. Activity in the main campaign has a direct effect on your online presence as well, items, special units and even characters are unlocked simultaneously. The smaller tweaks mentioned before would be unnoticeable to someone who isn’t looking, but now you can revisit character campaigns after their chapter is completed, to wrap up bounties and collect any missed units or items, and it’s more difficult to lose the resources you use to purchase more units, which is fantastic given how limited they are in supply.

Depending what you found yourself hankering after the original version will determine how badly you need the remake. If you were hoping for more of the main campaign, units or even factions, then there isn’t much waiting for you in 1080p. If you were hoping for more ways to lock horns with other strategy savvy opponents, then PSN/XBLA is as solid a battlefield as any. If you haven’t even had the pleasure yet, then this is as good an excuse as any to experience the magic. And the might.

If you were hoping for more ways to lock horns with other strategy savvy opponents, then PSN/XBLA is as solid a battlefield as any.