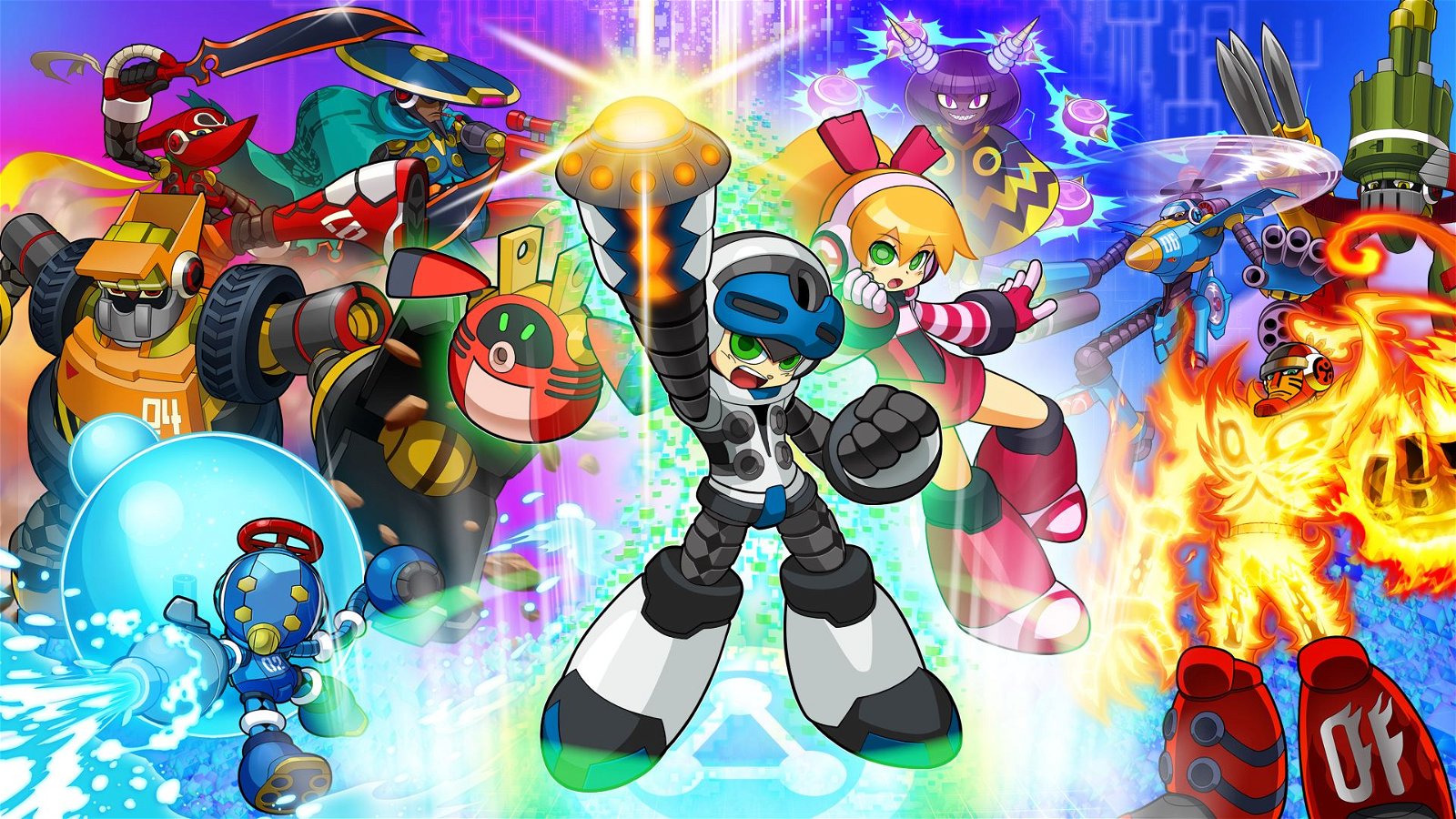 As someone who only dabbled in Mega Man games in my childhood, I played both the originals and the X series before digging into the spiritual successor by original character designer Keiji Inafune. I feel like people look at the original series with rose-tinted glasses, as it isn’t that great, or at the very least hasn’t aged well. The X series, on the other hand, is still serviceable and worth picking up if you’re got a hankering for a great retro platformer. Mighty No. 9, on the other hand, you can skip.

This $3.8 million USD crowdfunded platformer falls somewhere in between retro Mega Man and the X series. The graphics and stage layouts are simple like the original games, while dashing makes the game feel a bit like Mega Man X minus the wall jumping.

The difficulty is ‘old-school hard’, even on the default setting, and I can’t imagine how insane the three harder difficulties must be. Enemies are mostly pushovers and can be easily brought down, but bosses and some stage hazards will cheaply kill you in one hit. The default amount of lives is two, but after getting repeatedly and frustratingly pummeled by bosses, I set it to the maximum of nine. And yet, I still had problems with these cheap and infuriating brawls. Many times it was easier to just use the default blaster and stand close to the boss, rapidly mashing the attack button. I did this to take their health low enough to be able to just dash through them, instead of using any of the unlockable powers from other bosses.

Enemies can still be shot to death, but unlike Mega Man games they go into a stunned or weakened state before that happens. This allows you to dash through them, destroying them and collecting their power. This power is what is used to fuel the various suits unlocked by defeating the bosses found at the end of each level. This mechanic is great fun, at least when enemies and hazards are spaced out enough to make it useable. Often enemies will be bunched together or near a hazard, meaning dashing would spell damage or death, which forces you to dully shoot a corpse till it explodes, or knowingly take damage.

Perhaps the biggest sin that Mighty No. 9 commits is just being bland, forgettable, and having frequent frame rate issues. Levels just aren’t interesting, nor are they built in a way that fosters compelling platforming. I finished the game mere hours ago, and I couldn’t describe to you most levels. Perhaps this is because I spent a majority of my just over five-hour play-through battling bosses, but I’d say it’s mostly due to an uninspired and disposable level design. I can, however, tell you that the water level is especially memorable for both its ugliness and frequently plummeting frame-rate.

While not worth the purchase alone, I do at least appreciate the option to play with a modern or retro chiptune soundtrack. I’m a huge chiptune fan and found the retro background music to be decent, though don’t expect anything close to the majesty that was Mega Man 2‘s soundtrack.

The English voice acting is absolutely terrible, but thankfully the Japanese dub is included.

There are also plenty of optional challenge modes that range from time trials to breaking the targets like in Super Smash Bros., as well as co-op that has one player playing as Call, who has a jetpack and her own blaster. However, she is not even remotely fun to play as. For those that can’t get enough of the bosses, you’ll unlock a boss rush mode on the way, and if you love the entire game, you’ll want to jump into New Game Plus.

Blandness pretty much single handedly kills Mighty No. 9, as nothing stands out. It all feels like it has been done before, and done much, much better at that. If you’re sick to death of playing Mega Man games, and you’re absolutely dying for a fix, you’d still be better off playing one of the dozens of better indie platformers released in the past few years.

This boring and bland game isn't the spiritual sequel to Mega Man we were hoping for. Mega Man is dead, long live Mega Man!

File Under: Crowdfunding, Keiji Inafune, Mega Man
A retail version of the game reviewed was provided by the publisher. You can read more about CGMagazine reivew policies here.