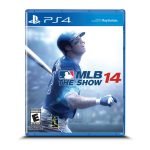 For years MLB The Show has been the gold standard not just for baseball games, but also sports simulation games. The Show usually releases in March, but this year saw the game pushed back to April for PS3 and Vita, with the long-awaited PS4 version dropping a month later, on May 6th. This was a tough pill to swallow, but for fans of the franchise, it just served to stoke the flames of their excitement even further. So how does the new instalment of The Show fare on the PS4?

What makes this year’s instalment shine is the fact that it was clearly built for the PS4’s capabilities, instead of merely being an upscaled version of a pre-existing PS3 game. The graphics are one of the biggest draws to play the PS4 version over the PS3 version, as the textures are enhanced, the spectator models are more varied and diverse, and overall the game continues to get closer and closer to replicating the visual experience of watching a baseball game. The level of detail and depth found in each of the 30 MLB stadiums is breathtaking. Every year there were enhancements made in prior years, but this year’s leap forward onto the PS4 is truly something special to behold. The character models are more lifelike than ever. The camera angles are more dynamic than ever before. Gameplay features have undergone some minor revisions, which make the game more exciting. Previously, a ball hit to the outfield would show a large baseball icon on the field, so that you knew where the ball was going to land. Now, that ball is moving and changing shape, as the ball travels, so that it’s a more enjoyable and unpredictable fielding experience, as you have to make your players run for the ball, just like they would in real life, without knowing for sure where the ball is going to land. The setup of the menus has been drastically redesigned, and although it took some getting used to at first, it’s actually a much more user-friendly design over all.

The popular Road to the Show (RTTS) mode has gone through some changes as well, as there are no longer any goals with regards to performance or training. Instead, there’s a rating on whether or not the player’s performing to expectations or not, which can then inform playing time. I didn’t mind the old training goals, but once I got used to not having to worry about them constraining where I apply my training points, it’s hard to imagine being subject to them. Additionally, when you create a RTTS player, instead of immediately entering the Draft, you instead play three prospect games, which influence which round you get drafted in. After the draft, you also have the opportunity to have your player decline to sign and instead go back to school, giving you additional training points, and a second chance to play in the three prospect games, to better your chances of being drafted in the first few rounds.

A new feature this year is the introduction of Community Challenge modes, which allow players to play and create custom challenges in the community, whether it is to strike out the side in a given situation, complete a perfect game in the ninth inning, etc. Although the game has enhanced RTTS and brought in the Community Challenges, it eliminates the Rivalry mode which has been in past releases of the title, which allowed two players to start a season where they played the same teams the entire time, in varying series length. In fact, when I first put the game in upon release, I was most excited to start up a new Rivalry series, only to discover that the game mode had instead been excised from this year’s release.

One of the most touted new features that can be found in MLB 14 The Show is the inclusion of the new “Quick Counts” feature.  In theory, I can understand why this new feature was developed, as a way of speeding up the game for those who didn’t want to spend 40-50 minutes playing each game. Quick Counts provides a randomly generated count when a new batter comes up to bat, instead of starting with a 0-0 count and moving from there. In terms of playing a sports simulation game, I find the introduction of Quick Counts in opposition to what I want from the game, which is a simulation of the experience of playing baseball at the MLB level. I feel like this option won’t be used that often by the typical MLB player, as the game simply isn’t for non-baseball enthusiasts.

Another new feature that is found in this year’s game won’t actually be useful until next year, and that’s the ability to use MLB 14’s save and progression data with MLB 15. This marks the first time in sports game history where save data can be used in successive years’ releases of a title. You can also cross-save between PS4 and Vita already (this feature has existed for MLB 12 and MLB 13 previously).

With major graphical improvements, a refined interface and a comprehensive reworking of the RTTS mode, MLB 14 The Show proves that SCEA isn’t done improving on their already-impressive product. They may be the only baseball simulation game currently being produced, now that 2K Sports has stopped developing their baseball franchise, but that doesn’t mean SCEA has rested on their laurels and slacked off.  The only negative thing I have to say about this game is that the removal of Rivalry really took some of the fun out of prolonged couch play, but at least Postseason mode can be used to somewhat emulate the feeling of Rivalry mode.  The introduction of Quick Counts is a nice idea, but realistically is likely to not be used very often by the dedicated MLB The Show fan base.  This is a fantastic game, well worth the investment to purchase for PS4, and a visual feast for the eyes.

With major graphical improvements, a refined interface and a comprehensive reworking of the RTTS mode, MLB 14 The Show proves that SCEA isn’t done improving on their already-impressive product.
REVIEW SCORE
9
File Under: MLB The Show, PlayStation, Sony