I often find our family looking for games we can all play together. My Singing Monsters Playground has been in Steep competition with our current go-to’s, Fortnite and Mario Party Superstars. IT has all the great qualities of a family-friendly group game, with the ability to invest time into it in single player mode as well, making it worth its price of $39.99, as it gets used often.

As soon as we dove into the game as a family, I noticed that My Singing Monsters Playground has a lot of similarities to the Mario Party franchise. The difference is the time required to play. With Mario Party, though you can choose to just play the minigames, kids always want to play a full board. That means dedicating about an hour of playtime, and that isn’t always possible in a busy household. My Singing Monsters Playground doesn’t involve a board at all. It is just a series of minigames that the whole family can play.

Though it isn’t winning points for originality, My Singing Monsters Playground is a blast. We repeatedly chose the 15-game tournament mode, which only takes about 30 minutes to complete, perfect for the little ones, especially close to bedtime. It’s great to be able to jump into the game and play several rounds in the time that it takes for one match in Fortnite. The kids don’t seem to argue that they didn’t get enough in, because they felt like they had played so many minigames.

“Though it isn’t winning points for originality, My Singing Monsters Playground is a blast.”

Essentially, each round, players choose a game to compete in, and they are awarded crystals for how they place—first, second, third or fourth. At the end of all 15 rounds, whoever has the most crystals wins! The person in last place chooses the game each round, which saves a lot of arguing and fighting over who picks what, a nice touch for families.

My Singing Monsters Playground features all kinds of minigames, some luck, some skill, some I’ll never master, so it really gives children the chance to win, even against their parents. Unfortunately, the game is small. There are only 25 minigames, compared to Mario Party Superstars’ 100 minigames. These slowly get unlocked through Tournament Mode, and then become playable in the Solo Gauntlet and Free Play.

Solo Gauntlet lets you start with one game, and see how many wins you can achieve in a row. Tournament is when you choose the number of turns and the one with the most crystals wins, and in Free Play, you can choose any game you want and dive in! Tournament mode was the most fun, allowing you to play with friends or family via a local Co-op. You can also choose the CPU difficulty—easy, medium or hard—letting you up the challenge as you move through the game.

Throughout your Gameplay, you will earn relics. These are used to randomly purchase new costumes or decorations for your Monsters and on screen. It feels like this was Big Blue Bubble’s attempt at game longevity, giving you something to collect. With so few games to play, I can see this getting tedious if you want to collect everything.

My Singing Monsters Playground is a good party game, safe for the whole family. I don’t believe it will be our number one game long term because it doesn’t bring a ton of content to the table. For now, the kids love it, and that is worth $39.99 to me. A single round of gameplay is short, but sweet, making sure that kids don’t lose focus and enjoy themselves along the way. What more can I ask for?

My Singing Monsters Playground is here to compete with the Mario Party franchise. Though the game features great ways to include the whole family, the game is still quite small, meaning it may not be viable long term. 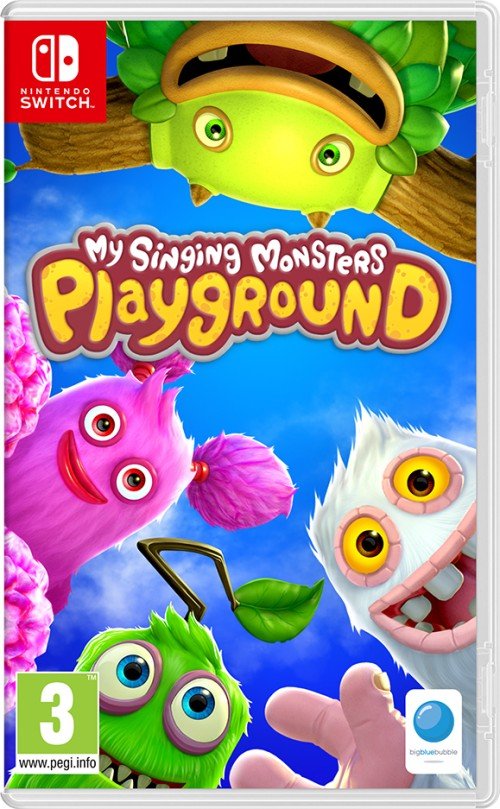