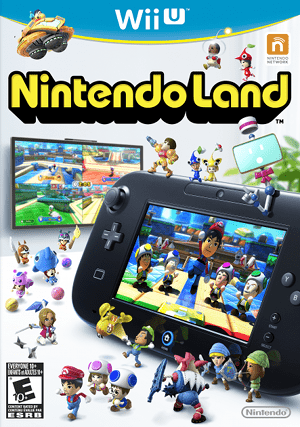 When Nintendo launched the Wii, it came along with Wii Sports to hook in all us unsuspecting gamers. It wasn’t a pretty game or a deep game. Essentially it was hardware showcase with Nintendo announcing, “hey folks, look what we can do!” It worked. Children, college students, and adults who should know better were all instantly hooked on the previously untapped joys of motion gaming. Now that the Wii U has come along to shift Wii units to dumpsters, landfills, and Value Village locations nationwide, Nintendo has whipped up a brand new slice of show off software to demonstrate all the joys that can be had in the magical world of console/tablet gaming. Well, they’ve gone and done it again. While the overall appeal of the big N’s new vision of gaming remains to be seen, Nintendo Land definitely shows just what this little beauty of a system is capable of. It isn’t very deep and it doesn’t exactly push the graphical boundaries of the Wii U’s powerful processor. However, it’s safe to say that anyone who owns this system will be able to use it as a party game that will make friends and loved ones giddy with delight. While I’m sure it’ll grow stale over time like Wii Sports, for now this offers about as much fun as a collection of Nintendo nerds can have together alone in a room with their pants on.

The basic concept for the game is offering players the Nintendo-themed dream park they’ve always dreamed of. Instead of a menu screen linking the collection of mini-games (though don’t worry, one of those exists if you need it), youf Mii is sent hurtling onto a flying futuristic hub where a creepy/lovable robot is your guide to a series of gamepad-centric mini-games based on classics from Nintendo’s glorious history. Each of the games is instantly accessible and takes advantage of the new technology in it’s own way. It’s certainly not going to offer the universal appeal of Wii Sports that got toddlers and house wives as giggling and excited about gaming as the hardcores, but in a way that’s kind of appropriate. After expanding and capitalizing on the casual gaming market, Nintendo wants to bring gamers back to the fold with the new system. So with Nintendo Land, the company has created something essentially designed to tickle gamers with nostalgia while showing off the capabilities of their new hardware. It’s also simple enough to attract newcomers, there’s just no doubt that playing a Metroid homage isn’t as universally appealing as bowling on your television for the first time.

So…where to start with the 12 games. I suppose the most ambitious of the minis is Metroid Blast, which requires a GamePad and at least a single Motion Plus controller and nunchuck to play. It’s essentially an area shooter multiplayer game, but the player with the GamePad gets to pilot a flying ship, while the Wiimote folks are on the ground as a Samus stand-in trying to shoot it down. One-on-one battles are a bit one sided, but throw in two or more ground level faux Samuses and you’ve got yourself a fight. It’s a simple game and well designed, with each mode of control both easy and addictive. The game also highlights a new design exploited in most multiplayer minigames and that’s the privileged view of the player holding the gamepad. Gone are the days when local multiplayer required split screens and lurking on other players was possible. Now two folks can battle it out in the same room without instantly know where the other is in the virtual world. Sounds simple, but Nintendo really exploits that feature well.

My personal favorite game in the collection relies on that feature: Luigi’s Ghost Mansion. If you’re one of the possible four Wiimote users, you move through the hallways of a haunted mansion trying to bust an invisible ghost with a flashlight. If you’re using the gamepad, you’re the invisible ghost and move through the shadows waiting to pounce from the darkness. It’s simple, but works incredibly well and can actually get some yelps (followed by laughter of both the deriding and joyful varieties depending on who you’re playing with). The potential of this type of multiplayer gaming is instantly clear and we can guarantee Nintendo and 3

party companies are developing party games as we speak. Mario Chase is similar, except it’s essentially a game of two player tag where the Wiimote player runs through a level trying to tackle the gamepad player who can see where the other guy is at all times.

Other games show how classics can be updated for new technology, like the Legend of Zelda Master Quest, which uses the game pad as a first person shooter aiming device while pointed at the screen. Then there’s Captain Falcon’s Twister Range, which finally revives F-Zero for a racing obstacle course in which you steer with the gamepad’s gyro controls and see a top down map on the controller while a full graphics racer appears on the TV (the graphics here are weak, but the control scheme works surprisingly well). Pikmin Adventure also teases at that long awaited follow up with a smash em’ up adventure in which the Gamepad player tosses around Pikimin with the stylus, while the Wiimote partners play as one of the Pikimen. Baloontrip Breeze also forces gamers to bust out the stylus to create bursts of wind that will move your long-departed 8-bit Nintendo veteran around levels. The Animal Crossing mini uses a bizarre technique in which the gamepad players moves two characters at the same time with the double joysticks, which hurts your brain at first, but quickly proves to be a somewhat ingenious new control scheme.

Other games are there primarily as tech demos. Takamaru’s Ninja Castle is by far the best of this bunch, allowing players to whip ninja stars at the TV by swiping them off the game screen for an arcade style shooter that is instantly addictive (don’t be surprised if a full length spin off pops up soon). Yoshi’s Fruit Cart is a bizarre drawing puzzle game in which you have to blindly draw a path through on obstacle course on the TV screen that isn’t visible on the controller screen and works surprisingly well for what it is. Donkey Kong’s Crash Course is a straightforward game in which you tilt the gamepad to move a high speed cart through a Donkey Kong-inspired (the original arcade version for those wondering) obstacle course that’ fun at first, but gets old fast. The final game I left for last because it’s by far the worst. Using an old Game And Watch character in the background, Octopus Dance is a dance game that uses the gamepad for motion controls and doesn’t quite work, particularly compared to the dancing games to come out of the Kinect.

Still, that’s only one full on misfire out of twelve, which is about as good of a hit-to-miss ratio as possible for a mini-game collection like this. All of the games are fairly short with few options, but they are designed for replay and competition, which is all you really need. Since the games are Mii based, you and friends can create separate accounts to build up big fat high scores on leader boards to encourage replay. Throw in a bunch of bells n’ whistles like theme park prizes and trophies, and you’ve got something that’ll keep achievement craving gamers coming back. There’s enough here to keep players returning to Nintendo Land long after they’ve amassed more to their collection than just launch titles and I think it’s safe to say that if the Wii U is the hit console Nintendo is banking on, this will be a go-to party game for quite sometime. You can play all of these games in single player if you wish, but throw in a partner or four and you’ve got yourself a few hours of giggles and competition ahead.

Nintendo Land isn’t really a game worthy of an incredible review score since it’s fairly simple in terms of graphics and gameplay, but judged as a hardware showcase launch title, it’s about as good as it gets. The 12 mini-games show off what the gamepad can do brilliantly, with each game different enough to suggest so many possibilities and surprises for developers to exploit in the future. Sure, Nintendo won’t be winning awards for this thing any time soon, but a quick spin at a friend’s house or on a display model should instantly sway naysayers unsure of what Nintendo was up to with this whole tablet controller thing. It’s not just a gimmick. This new controller really does open up a wide array of new gameplay possibilities and given how well all these mini-demos turned out, it’ll be exciting to see what Nintendo has planned when they unleash their new versions of staple franchise like Zelda, Metroid, F-Zero (god willing), and the inevitable new 3D Mario game (which I hope will continue the masterful Mario Galaxy series, but who knows what will happen). It’s worth picking up the deluxe Wii U bundle just to have this game along with it (plus I’m sure the extra hard drive space will come in handy really soon). It might not be as broadly appealing as Wii Sports, but Nintendo Land is just as good as selling the new system. I’m officially on board. Granted that was inevitable, but it’s still nice not to be disappointed.

Nintendo Land isn’t really a game worthy of an incredible review score since it’s fairly simple in terms of graphics and gameplay, but judged as a hardware showcase launch title, it’s about as good as it gets.
REVIEW SCORE
9
File Under: Nintendo Wii U