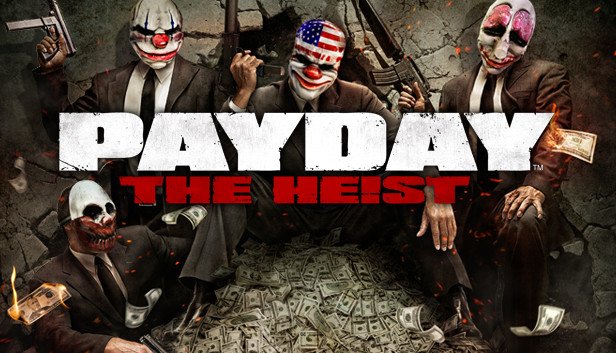 Some of us played Red-A when we were kids, some of us played Cops & Robbers. Admittedly, some of us probably played both. But many of us, today, have played Counter Strike, Left 4 Dead and other atmosphere changing games where we shoot people endlessly somewhere on the other end of a screen. Many of us saw the film The Dark Knight, it’s made a billion dollars after all, and while that isn’t a game, small game studio Overkill seemed to take a liking to a particular, opening scene. To like things, and to take those elements are well intentioned, and to have good ideas all the better. But how to use those tropes, the ability to do and not just plot, that would be the real score.

Payday: The Heist is a bank robbing, online multiplayer game. You and three others are given around a half dozen crime spree scenarios, starting with a simple bank buster and ending with a van job that goes wrong when the vehicle ends up half-way through the roof of a slaughterhouse. Other than the consistency of the clown-masked, code named criminals there doesn’t seem to be much of an ongoing plot. Just four boys who like to see crime pay. There is variety in these missions in the sense variety is there. A tower-top diamond heist lets players flex their stealth skills against dim, flashlight carrying, hired security and an escort mission where you push and torture a turncoat could break up the gunning and turf control, but they only appear in their assigned levels. It’s more like the diamonds are in one vault with the rubies in another.

But within the basic structure, there are interesting complications to keep things from just being more dead cops than an NWA album. In most of the levels you can take bystanders hostage, holding a gun to their back will make them duck and stand out of your way, but using plastic ties to cuff their hands lets you turn them into bargaining chips if one of your own is arrested (though this didn’t seem to happen often.) Police forces will try to rescue the hostages, though as long as one team member keeps an eye on them they’re hard to lose, enemy AI is rarely too original about entry points. Almost all levels have segments where tools and gadgets must be maintained in different spots on the maps, saws and hacking gizmos will strategically hiccup forcing someone to touch base with them. This all sounds like a decent way to kill time and score fake dollars, assuming you play online. And that’s where I encountered some surprise frustrations.

In the week I’ve had to try out Payday: The Heist, I have managed to join a total of two online matches. It is not for lack of trying. Sitting in the lobby screen is an ultimate test of patience. While many smaller, online game endeavours will automatically plug you into a new group, The Heist wants to give you the option of selecting one for yourself, which would be great if there were ever more than three options at a time (usually it’s just one) and terrible because of an even more illogical grievance. When it does find me a game to join, it won’t let me. An error about the room filling up will be screen fixture. At first I took the error to heart, that three others just beat me to it at that moment, but whenever I refresh, even after three or four rotations of other rooms, I’ll encounter that same “filled” team still waiting to go.

Playing alone is no fun at all. The enemy AI is a bit dense but functional, but the team AI is stubborn and pointless. They either follow, kill, or stand still. If there are hostages to be maintained, gear to be checked or, worst of all, that one stealth portion, they are not savvy enough to help out, and suddenly a game where four folks are supposed to whip through it is just you struggling. My PS3 has a strong connection, full bars, the lot. A quick Google search lets me confide that I’m not at all alone in suffering the online error.

Even if the online worked, The Heist still wouldn’t be that amazing. It’s mean to hold it up to peers like Left 4 Dead, given how much smaller this project is, and I’ll lay off the stodgy voice acting, but that’s not an excuse to hold back some more core criticisms. The levels are all short and most don’t have much depth to them. The more clever ideas implemented in the game’s system rarely occur. I think my largest question is why is this an exclusively co-op affair? Even a gamer’s parents can tell you that versus bouts have become a bit of a thing in video games this, uh, last decade or two, and until actually starting the game I was even under the implication that this was cops AND robbers, with both roles filled. I get that “being bad is good” with gaming culture from recent history till whenever, but if it’s all going to be thieves and crooks in a world of incompetent guardians then that isn’t really much of a conflict. Payday meant well, well, bad, but when you cash out you’ll be let down how half-full the loot bag is.

It’s mean to hold it up to peers like Left 4 Dead, given how much smaller this project is, and I’ll lay off the stodgy voice acting, but that’s not an excuse to hold back some more core criticisms.
REVIEW SCORE
5
File Under: First Person, Payday, PlayStation, Shooter