Phantaruk is a bit of an odd name for a bit of an odd game. And while it fails to deliver any appreciable tension, it does at least succeed in providing several intriguing story elements  —even though it neglects to nurture them.

On a surface level, the inspirations for Phantaruk are immediately evident. There’s very clearly intent to recreate the tension of Alien: Isolation, paired with some shameless cribbing of the themes and delivery of SOMA. And while that’s not necessarily a bad thing, I would argue that imitation, contrary to cliché adages, is not a particularly sincere form of flattery; at least not in this case. The real problem is that between the game’s linearity, lack of personal identity, use of trundling and mutated enemies, heavy-handed story delivery, and brief overall length, Phantaruk fails to distinguish itself, from a gameplay standpoint at least, in any meaningful way from its contemporaries. 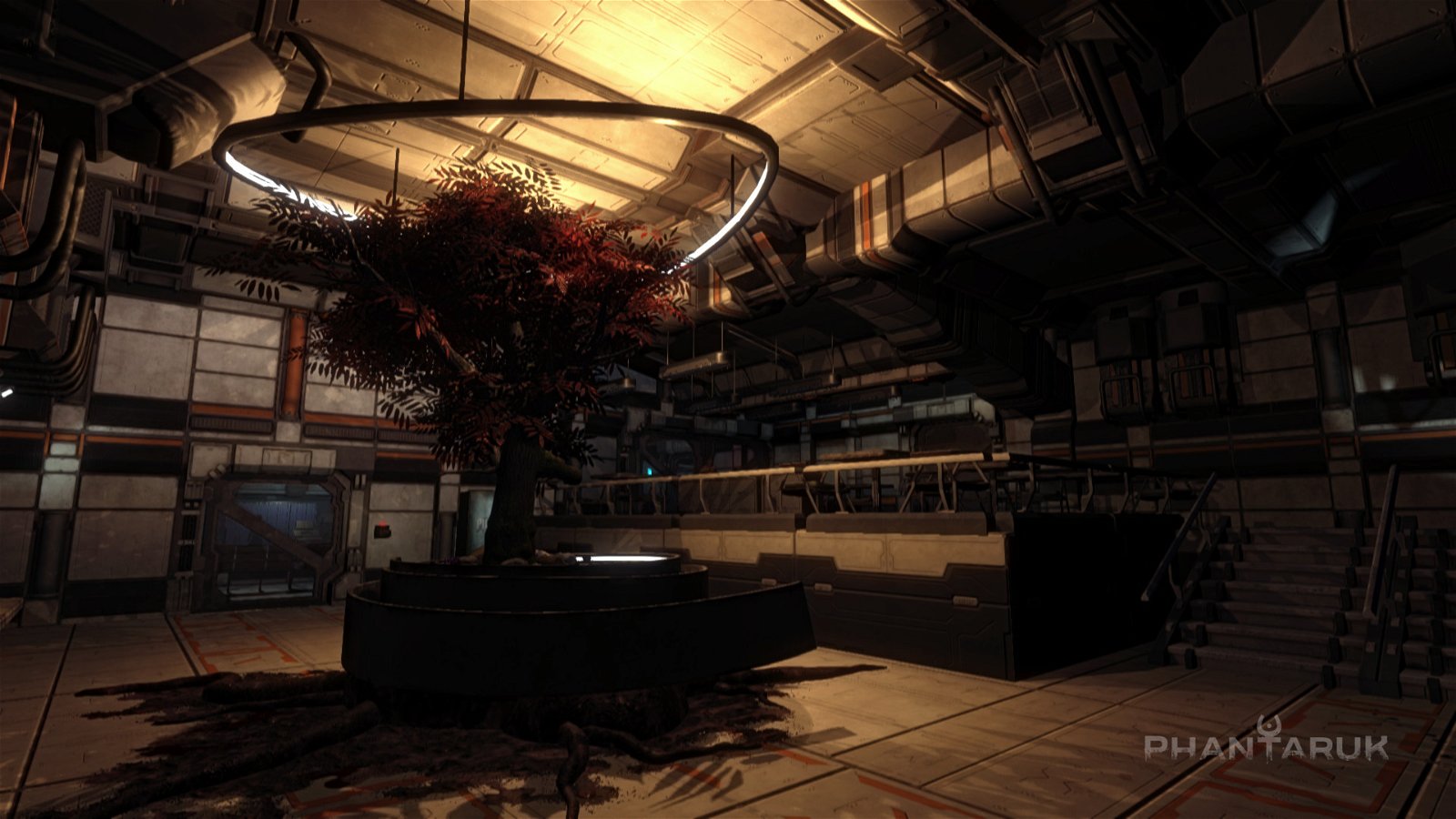 Lacking in distinguishable identity isn’t such a great party foul if it’s at least accompanied by a rich (or at least engrossing) story, but the most interesting tale that Phantaruk delivers is through its in-game history. Not its present narrative, to be clear; but rather, its references to past events that aren’t actually experienced by the player. Even the game’s name, Phantaruk, is borrowed from the name of the game’s new-age God, a re-envisioning of Set that emerged from within a Egyptian quarantine colony created to contain a smallpox outbreak. That particular outbreak was eventually responsible for three billion deaths on Earth. The cult of Phantaruk viewed it as judgement of the wicked, as ordained by The First One (an alluded patient zero for the outbreak) within the Djara quarantine zone in Egypt. By fire they would be judged and cleansed, the cult said, a prophecy that came to be fulfilled by the burning of infected bodies. Meanwhile, the natural resistance of some infected allowed new recruits to the cult to act as Typhoid Marys, easily serving as vectors to spread the disease.

Unfortunately, this is all a much more interesting story than the one that’s told aboard Purity-02, the research and cloning vessel that serves as Phantaruk’s setting. Run by the H+ organization (a less-than-subtle reference to the nature of their work in transhumanism), which is accused of ties with the Phantaruk cult, the station has suffered a major disease outbreak of unknown origin. Sadly, beyond the alluded ties to the cult, and the ham-fisted and revelatory audio logs left by the ship’s captain, there’s little that’s ever actually explained. The whole experience is a bit of a mash of “wake up and realize you’re a clone”, “discover audio logs from captain”, “avoid enemies like SOMA”, “crawl through vents like Deus Ex”, and “stop event like every outbreak plot ever”. The real cause of that outbreak, its repercussions, the potential of it being a planned experiment, the potential for other such incidents, its relation to the events back on Earth, the nature of the crazy stuff growing in the ship, the relationship between the giant insects and the virus, or the story and fate of Purity-01, none of it is ever explained. So many intriguing elements are introduced, but never developed., Instead, our interest is squelched by lump-sum dumps of second-hand information  through audio logs and  the fact that all discoverable items in the game are conveniently highlighted for the player. 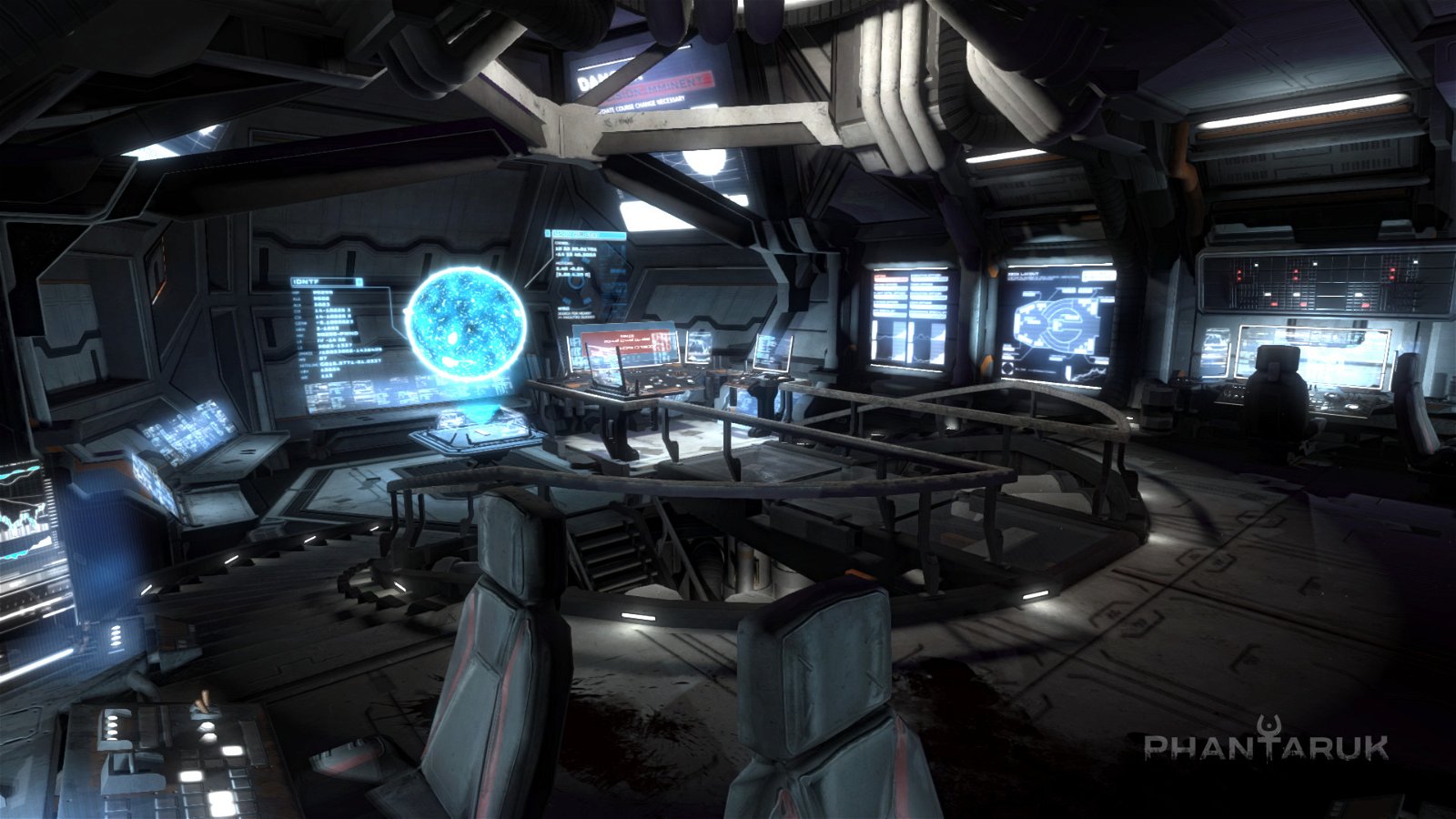 It’s a real tragedy, if I’m honest, because there really IS excellent story in the game; it’s just never fleshed out or properly explored. And while I would so much love to read about or play through those other stories, Phantaruk’s core loop of “don’t get spotted >> The End” simply isn’t resonating with me. Sure, there are some amusing references in the form of a mutated brain with appendages that looks an awful lot like a headcrab, and there’s a beautiful Sunshine moment towards the end of the game, but they’re not enough to excuse an otherwise underwhelming crawl through a relatively lifeless ship. Particularly one that manages to be almost too-brightly lit at all times thanks to the aggressive bloom from all the high-tech-y lights on everything, which subsequently manages to eliminate almost all appreciable darkness, while simultaneously washing out any real definition from what little is left.

Phantaruk’s gameplay also leaves a lot to be desired. Enemies don’t threaten to discover you –  rather they are either “aggressive” or “not”, sometimes lurking without warning on the opposite side of a door as you open it, waiting to awkwardly swipe at the player and force a re-load. With the game having these sorts of issues  and a vaguely-exploratory story lasting just over two hours, I’d be lying if I said I was impressed. But I’d also be lying if I said I would rather pay the $10 or so for the couple hours to be had in Phantaruk on a movie ticket instead. The only true let down in all this is that the epic tales of doomsday cults and corporate involvement in human testing are completely sidelined in favour of a cliché and melodramatic pantomime about ending a small-scale mishap.

Here’s hoping that Polyslash gets another bite at the apple to bring us the former, now that they’ve given us the latter.