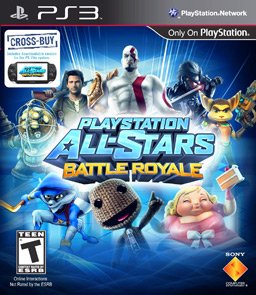 Nintendo’s Super Smash Bros. may have been the first game to capitalize on gamer nostalgia by pitting the Big N’s most famous faces against each other for rounds of fisticuffs that would answer schoolyard arguments about the relative awesomeness and ass-kickery between characters like Mario, Link, and Samus once and for all. An instant hit, the franchise has become a staple for every Nintendo console from the N64 on and also inspired developers to load up their projects with references and in-jokes that help knowing gamers justify their controller-bound obsessions. It seemed inevitable that one day one of Nintendo’s competitors would try to whip up their own version of Smash Bros. The concept is just too instantly appealing and the cross-marketing possibilities offer up way too many dollar signs to be ignored. So, in the year of the potential apocalypse, Sony has finally decided to throw their hats into the franchise-beat em’ up ring just before the world goes boom. Playstation All-Stars Battle Royale is exactly what you’d expect. It’s a Smash Bros. clone with only minor changes to the formula and you know what? That ain’t a bad thing. The unique Smash Bros. fighting mechanics have always been incredible and it’s about time someone knocked it off just like every other fighting game on the market.

Stop me if any of this sounds familiar. Playstation All-Stars offers gamers a chance to join in epic four-player battles. You’ll pick up powerful items, string together combos, slap around three opponents simultaneously, and eventually build up to super moves that put on an animated light show and substantially alter matches. Along the way you’ll be able to toss together hilariously unexpected fights like watching PaRappaTheRappa smack Big Daddy in the face and enjoy interactive levels that change, mutate, and even hurt you mid-fight. So far, so similar. It’s Smash Bros. with a Sony remix. There are some new additions though. Battles aren’t fought and won with health meters. Instead your normal attacks will be focused on building up your attack bar which, borrowing a technique from Marvel Vs. Capcom, has three levels of intensity each more powerful than the last. Points come from killing other players with these special attacks. A one bar attack will kill off a single opponent, while a 3 bar attack could kill off everyone more than once (and of course, you’ll get a sweet, sweet cut scene with the triple attack as well). It’s actually a pretty effective change to the Smash Bros. formula that adds a bit of risk/reward strategy to the expected button mashing shenanigans.

The 20 fighters that come along with the game are a nice mix of icons and obscure fan favorites pulling together a group of fighters from diverse and differing worlds n’ consoles like Little Big Planet’s Sackboy, God Of War’s Kratos, Uncharted’s Nathan Drake, MidiEvil’sFortesque and both the good and evil versions of Infamous’ Cole MacGrath. There are some weird omissions (no Crash Bandicoot…seriously?), but it’s safe to assume that there will be plenty of DLC characters to fill in the gaps. While the general gameplay is fairly accessible (especially for Smash Bros. veterans since the controls are essentially the same), not all of the fighters are created equal. Some like Kratos allow players to annihilate the competition on the first spin of the disc, while others like Twisted Metal’s Sweet Tooth will require a lot of practice just to be able to fill up the attack bar. It’s clear that the designers went out of their way to make sure that every character had their own unique fighting style, but sometimes the gap between the fighters is so extreme that it’s pretty well inevitable that updates will be required to level out the playing field. For now it’s balanced enough for a party, but first time players will definitely not be able to use all of the fighters right off the bat.

As far as gameplay goes, all the expected modes are accounted for. There’s a single player arcade option that takes about 30 minutes to work through with each character including the final boss. It’s definitely the most disappointing aspect of the entire game. Not only is it ridiculously easy (often feeling more like a training mode than anything else), but the cut scenes used for the wrap around stories for each character are done entirely in stills. Obviously fighting games aren’t exactly played for their single player stories, but this is a disappointment. Part of the appeal of this sort of game is getting to see amusing rivalries play out between familiar characters and you’ll only get to see that with one pre-match rivalry dialogue scene between each character. It’s definitely a missed opportunity and a bummer. That said let’s face it, fighting games live and die on multiplayer and arcade story modes are essentially a bonus feature at this point. Playstation All-Stars delivers the multiplayer goods in style. Local matches will lead to just as much laughter, joy, and bitter resentment between friends as Smash Bros., while the online multiplayer is focused on tournament play. The game has been loaded with extra costumes, items, and trophies to be earned online that should extend the gameplay of this title exponentially. While it would have been nice to see the developers go all out with an epic single player adventure with these familiar characters like Smash Bros. Brawl, that didn’t happen and at least the straight up fighting is ridiculously addictive/entertaining. Hey, they gotta’ leave something open to explore in sequels right? Games aren’t standalone projects anymore people! They are all franchise pilots.

The good news is that while there’s no denying that Playstation All-Stars is dripping with gooey globs of Smash Bros. DNA, the game is very much its own beast as well. It’s just different enough to stand alone, while delivering all the joys of that Nintendo beat em’ up party. Sure there are problems and inconsistencies, but nothing out of the ordinary for the first chapter in any new franchise. Sony has delivered their own franchise fighter that should suck up hours and hours of the lives of many longtime PS gamers. The multiplayer is fantastic and that’s all that counts. Updates and DLC will expand the fairly limited roster of characters and levels soon enough, while the inevitable sequels with smooth out all the rough edges. Throw in the fact that a Vita version comes free with every disc and smoothly interacts with its console daddy, and you’ve got yourself a pretty deep fighting game well worth the investment. Sony could have easily fallen on their face with this thing and while it’s inevitable Smash Bros. fans will still scream “rip-off” at the top of their lungs, it would be mistake to dismiss this if you’re a fan of that franchise. Smash Bros. games only tend to come once per console generation, so this is the perfect way to ease the pain as you wait for Nintendo to debut their shiny new Wii U version. This is sure to be a damn fine new fighting game obsession for lovers of the genre and will hopefully be successful enough to warrant sequels. Sony done good on this one folks. There would have been sales without this kind of loving attention to detail, but thanks to the effort we can officially expect a new fighting franchise rather than the sad knock-off embarrassment that this thing could have so easily been.