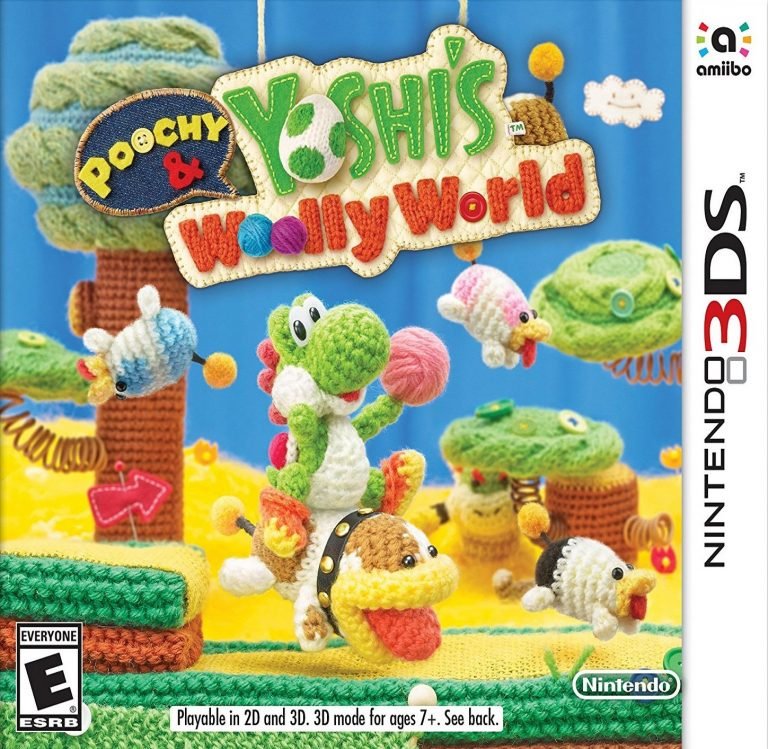 They don’t come out as often as some of the larger series in Nintendo’s arsenal, but there is something undeniably charming and satisfying about the Yoshi’s Island series. They first started on the SNES as an oddball sequel to the beloved Super Mario World, and have been popping up occasionally ever since. Not that long ago, the series got a woolly facelift for the Wii U, in one of the most adorable titles that Nintendo spat out onto that troubled system. Now the folks at Good-Feel (a developer name that you want to hug) have ported it over to the 3DS and it’s pretty much the same only available on a system that you actually own. Poochy & Yoshi’s Woolly World is a charmer. Sure, it’s mostly for kids, but aren’t we all kids at heart?

The game itself is the same as before. It’s Yoshi’s Island. You flutter around as Yoshi, eat some baddies to poop out as yarn ball projectiles and then fire other ones with a timed system. If you’ve never played one of these things before, it’s easy to learn (and there is an even easier mode for younger players that we’ll get to in a minute). The levels start incredibly easy as is the Nintendo way and then grow steadily in difficulty. There aren’t many surprises. You kind of know what you’re getting with this series, and it’s just as playfully amusing (and occasionally frustrating) as it’s always been.

The difference with this addition to the franchise is the adorable wool aesthetic. On the Wii U, it was an HD beauty that showed off what the system could do. On the 3DS, the graphics have been downgraded, but it still looks fantastic. The world screen has been changed, but the rest is the same. The window-box 3D aesthetic is pretty, but the sidescroller clearly wasn’t designed to take full advantage of the system’s unique visual capabilities. Oh well. Most people don’t adore the glasses-free 3D visuals as much as me anyways, so I doubt anyone will notice.

There are some new modes in Poochy & Yoshi’s Woolly World. There are six new levels where you get to play as Poochy. These are essentially light autorunner games based in simple timing and collecting challenges that are a good time, but not exactly a unit-shifter. There are also upgrades to Mellow Mode designed to make this even more accessible to younger players. Yoshi gets wings to make fluttering through the platformer even easier. He’s also now followed by Poochy pups that can be tossed around like yarn balls and never run out. These pups also rush towards hidden areas, making them more obvious. It’s a nice way to help kiddies get a handle on the game faster (and in a nice addition, can also be turned on and off of mid-level to avoid getting stuck), but not something that any experienced player will have much use for. Co-op mode has unsurprisingly been removed for the handheld and it’s not particularly missed since it never added much. It means that the only way to see Poochy’s pups is through Mellow Mode though, so I guess that makes it worth turning on once or twice if you miss those lil’ dudes.

The biggest new edition to Poochy & Yoshi’s Woolly World are the 30-stop motion animated films. They are all under a minute long, look pretty in 3D, and are (if possible) even more adorable than the game itself (which you should know already if you’ve seen any of the shorts released online for promo). Weirdly, they aren’t unlocked through gameplay though. Instead, they are each released every 24 hours after you’ve started playing the game. That’s a fun feature to get players coming back to the title every day once they’ve bought it, but given the ease with which you can easily leap through all the levels in this title, it would have been nice if they were unlockable and accessible more directly. But still, this is another feature for the kids who may never finish this thing. At least it gives them an excuse to come back.

So there you have it. Poochy & Yoshi’s Woolly World is now on the 3DS and aside from a predictable visual downgrade and the loss of co-op mode, it’s pretty much the same thing with minor bells and whistles. If you played this sucker already on the Wii U, it’s not necessary to dive in yet again. However, for those who never played it before the good news is that this portable edition is a more than worthy substitute to its console big brother.

Poochy & Yoshi’s Woolly World is a delightful new entry in the Yoshi’s Island series that serves up everything you could want in one of these games. The woolly aesthetic is so damn charming that it will likely follow the series through at least another chapter. So, it’s a good time to be a 3DS owner charmed by cuteness, even moreso than normal.

Poochy & Yoshi’s Woolly World comes to 3DS and it’s every bit as delightful (and simple) as it was on the Wii U .
REVIEW SCORE
8
File Under: Nintendo, Nintendo 3DS