Entering The World of Puzzle E-Sports 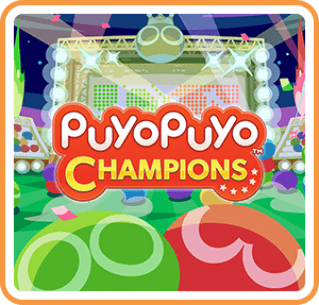 The Puyo Puyo franchise has seen a bit of a resurgence in recent times, a fact that brings a smile to my face. After the unexpected crossover between Sega’s own puzzle series and Tetris, I was curious as to what Sega had in mind for their next Puyo Puyo title. While bringing the series into the world of E-sports was another move I didn’t have in mind, I’m even more surprised by just how well it works. Puyo Puyo Champions strips their series down to its core competitive gameplay, focusing on online head-to-head multiplayer. The results are a fun, but far more hardcore version of the colorful puzzle series that long-time fans Puyo Puyo fans will likely enjoy.

The Puyo Puyo games are a long-running series of tile-matching puzzle games, similar to Tetris and other games of the same nature. As the different coloured creatures known as Puyos drop, players must match sets of four of the same colours to clear them and avoid reaching the top of the screen. As players clear Puyos, they create junk blocks which fill their opponent’s screen. It sounds incredibly simple on paper, but Puyo Puyo is a game all about setting up combo chains which take clever planning to properly pull off. Puyo Puyo Champions complies the classic Puyo Puyo 2 along with the fan-favourite title, Puyo Puyo Fever.

Puyo Puyo Champions uses the art style we’ve seen since the original Puyo Pop Fever released in 2003 and it still looks just as beautiful. The game features 24 characters spanning from across the series’ history, fully voiced in both Japanese and English. In addition, players are able to change the appearance of the Puyos along with the background stages. Puyo Puyo Champions retains the charming visuals and sound that the series has had for all these years.

Unlike earlier Puyo Puyo titles, Puyo Puyo Champions’ only focus is getting players right into the action. From as early as the game’s title screen, players are able to hop right into a match against a CPU opponent. Unfortunately, anyone looking for a solo experience will be sorely disappointed. Puyo Puyo Champions lets players battle against up to three computer-controlled characters or an endless rush of one-on-one battles. There’s no type of story mode or even an arcade mode. This also means that there’s nothing to unlock in the game. All 24 characters are available from the start along with any customization options. Even more bizarre, however, is that Puyo Puyo Champions doesn’t feature any kind of training mode aside from regular CPU battles. At the very least, Puyo Puyo Champions does record all matches, allowing players to revisit previously played games and review strategies.

When it comes to creating its own E-sports community, Puyo Puyo Champions excels at what it aims to accomplish. While hardcore Puyo Puyo fans will likely have no problem enjoying this title, the barrier of entry will be extremely hard for anyone just getting into the series to break through. I do wish there was a bit more in the way of content, even if it only came in the form of unlockable cosmetics to show off online  Still, at its very low-cost point, Puyo Puyo Champions is a treat for puzzle fans while being a potential push for newcomers to enter a new frontier of Puyo Puyo.

Puyo Puyo Champions is a near perfect for hardcore puzzle game enthusiasts, but casuals may want to start elsewhere.
REVIEW SCORE
8
File Under: