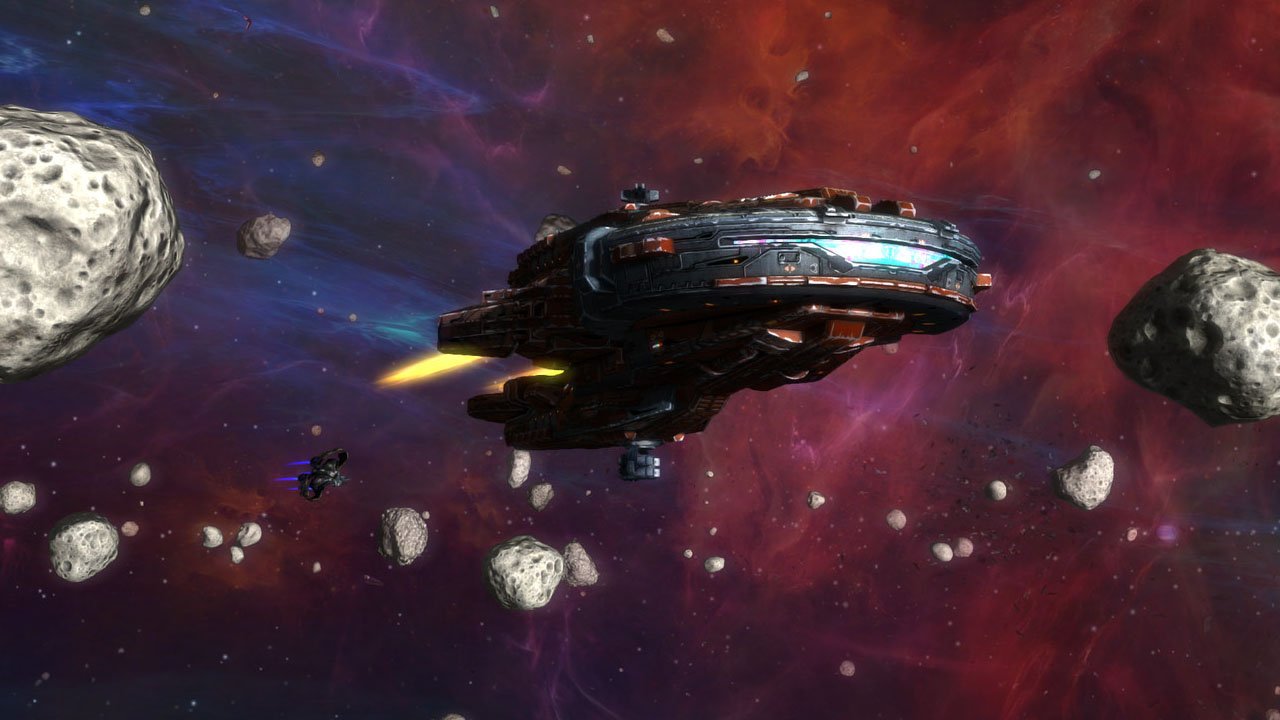 The first time Southern rock began swelling in my ears as I brought my ship to bear against an enemy frigate, I knew this was going to be a game I would invest countless hours into. Placing you in the hull of an intrepid pilot in a Wild West inspired frontier, Rebel Galaxy is an open-world space combat game that isn’t afraid to hand you the reigns and let you decide where to go.

After the first few minutes, where you’ll be quickly given a morsel of story to explain how you came to own your own corvette-class spacecraft and why you should use it to hunt down your missing aunt, you’re unceremoniously ushered out the door and into the vast series of star systems of Rebel Galaxy. Aside from pursuing the main story, you’re free to decide how you want to play and grow in the backwater systems full of peddling traders and ruthless bandits. While making ships explode in great balls of fire will always be a possibility, you’re more than able to ignore the excellent ship combat in favour of playing the market or living the mundane life of a miner; the choice is yours.

Ignoring this element would be a big mistake, however, as it represents some of the best parts of Rebel Galaxy. While I was eager to spend some time hauling goods between stations as a trader, it wasn’t long until I felt the siren’s call of a broadside cannon urging me to pull up beside some bandits and unleash hell. And really, it was during these chaotic firefights that Rebel Galaxy was always at its most interesting, so it seems fitting that the story almost exclusively focuses on getting you into thrilling fights as often as it can.

Combat in Rebel Galaxy forsakes the third degree of motion afforded by flying in space to deliver an experience that more closely resembles naval combat. Instead of weaving around enemy ships with every degree of motion, you move about like a boat, exchanging volleys with enemy craft and managing your directional shields to prevent taking fatal damage.

Though your initial ship will serve you well for a few missions, you’ll eventually want to upgrade to something better suited to taking and giving a beating. Rebel Galaxy has no shortage of ships for every pursuit. Even among combat-focused vessels, you’ll have to decide between swift corvettes and frigates over exceptionally tough destroyers, each with their own personality and quirks that you’ll need to contend with. Turret hardpoints are often located at various spots along the hull, which will have a big impact on what types of weapons you equip and how you use them in battle. Even then, you’re still left with a huge variety of weaponry to strap to your hull. Everything from lasers to flak cannons, each specialized to deal with specific types of threats.

Though smaller fights quickly devolve into tedium, getting involved in scraps with larger forces in Rebel Galaxy can be an extremely satisfying experience. You can control one of your guns at a time while the others fire automatically, allowing you some degree of strategy on how to best use your weapons to tear through enemy ships. You’ll also need to manage incoming fire, a task that can prove extremely challenging against overwhelming forces that will tear you to shreds if you merely rush straight into the fray.

I do wish Rebel Galaxy had more intuitive interface elements—a problem that extends from the combat to just about every aspect of the game. I was frequently wishing I had more precise information, which was rarely the case. A colour-coded alert system will indicate the threat level of a force, but gave no specifics as to what elements of that force are threatening to me. Taking direct hits without shields or armour to mitigate them can result in damaged systems, but aside from appearing briefly, I could never find information as to what the consequences of that damage were. Even the tutorials were sparse, and it was hours before I finally came to understand nuances that could easily have been explained in seconds.

Trading is easily the area most plagued by this problem as the whole system remains obtuse and confusing unless you’re willing to invest a few hours into working out its kinks. I love that the worlds of Rebel Galaxy have dynamic economies that are reactive to what is happening around them. Pirates can siege a station, causing prices on commodities to plummet, or a station might enter into an economic boom, flooding the market with a type of resource. But interpreting that data in order to make shrewd business decisions felt next to impossible. The fact that I couldn’t even track purchases without a pen and paper was infuriating—this is the future, is it not?

But Rebel Galaxy is such campy fun that these frustrations were always soon forgotten. Though I wish the systems and their various residents had more personality to invest in, the game itself is brimming with adventurous charm not unlike Joss Whedon’s Firefly television series. Though the voice acting is serviceable, it’s the cowboy rock (which can actually be substituted for your own musical selection) and the intoxicating sense of freedom that kept me invested in Rebel Galaxy. It might not offer the depth of space-faring greats like Freelancer, but Rebel Galaxy is flashy and fun in all of the best ways.

Ignoring this element would be a big mistake, however, as it represents some of the best parts of Rebel Galaxy.