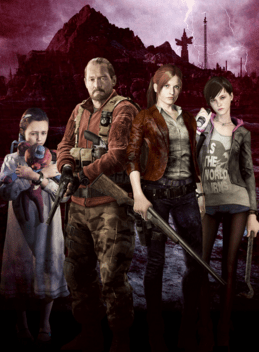 If you’ve stuck with Resident Evil: Revelations 2 up to Episode 3, then prepare to be rewarded. The game has been steadily improving since it started three weeks ago, but this third bit is, by far, the best of the bunch. As already mentioned in the previous reviews, Revelations 2 is quite good—easily the best console iteration the series has seen since Resident Evil 4.

Part of the reason Revelations 2 works, however, is brought to a fine point in this episode—the fact that the developers clearly understand this is as much satire as serious. Episode 3 is gleefully absurd, even stupid. The locales include a meat factory, sewer and factory, and the game just runs them into the ground with absurd horror tropes.

Why, for instance, would any reasonable, sane human being wade hip deep through a vat of pigs’ blood to destroy a crate that might have a few shotgun shells in it? Why would even an insane overseer install a room with a dropping spike ceiling to protect a key? Hey, who cares! Resident Evil jumps deep into the crazy pool this time around to create a delightfully idiotic B-movie horror motif.

The over-the-top villainess gets more screen time in both plot threads, Claire learns the sad truth that love really is a battlefield—or at least a sick and twisted mutant rampage—and more! Moira, as it turns out, is surprisingly useful with her flashlight and crow bar. Indeed, there’s a certain thrill in sticking with Moira. She blinds her enemies, waits for Claire to kick them down, and then finishes them off with a crowbar.

You can’t make this stuff up. It just magically happens. And so much magic happens this episode. We get to see the horribly clichéd traumatic past of Barry and Moira in fragmented flashbacks and sad, sad discussion. Claire acts like she has a heart underneath all that fashionable attire and a convoluted meat grinder proves once again why it’s always the absolute best place to leave one’s keys. Also, the pigs’ blood… There’s so damn much pigs’ blood.

The pacing is nicely tipped toward exploratory players more so than combat this time around. There are plenty of bad things to abuse, of course, but the game doesn’t bog players down with shambling moaners when they’d prefer to search around with their flash light or little psychic girl. This is personally appreciated, but for those wanting more action in their survival horror, you can just push through the doors faster to get to the monsters waiting inside.

Finally, there’s an abundance of glorious exploding canisters! Who doesn’t love those? Revelations 2 is really starting to stretch its legs and, well, revel in the absurdity of the genre it helped create. Even the moments that are supposed to be dramatic feel like sly jokes against both the series and the whole genre.

For purists, all the things they expect are here of course. The absurd traps, mindless enemies, maze-like corridors, and crazy key hunts have always been prime ingredients in survival horror and exist in drove here. Obsessive gamers can comb every dark crevice of each location with the finder girls to discover all the ammo, money, hidden plates, and supplies.

So, as before, there’s a hefty feeling of getting your money’s worth. More than that, however, this episode clicks the whole game together. It’s better than the previous two in every way that matters. It feels bigger, more fun, and more engaging. As a result, episode 3 lifts the early chapters up to a higher level and makes us eager for next week’s installment. So, bravo Capcom. It seems your marketing gamble is paying off rather well.

Part of the reason Revelations 2 works, however, is brought to a fine point in this episode—the fact that the developers clearly understand this is as much satire as serious.
REVIEW SCORE
8
File Under: Capcom, Xbox