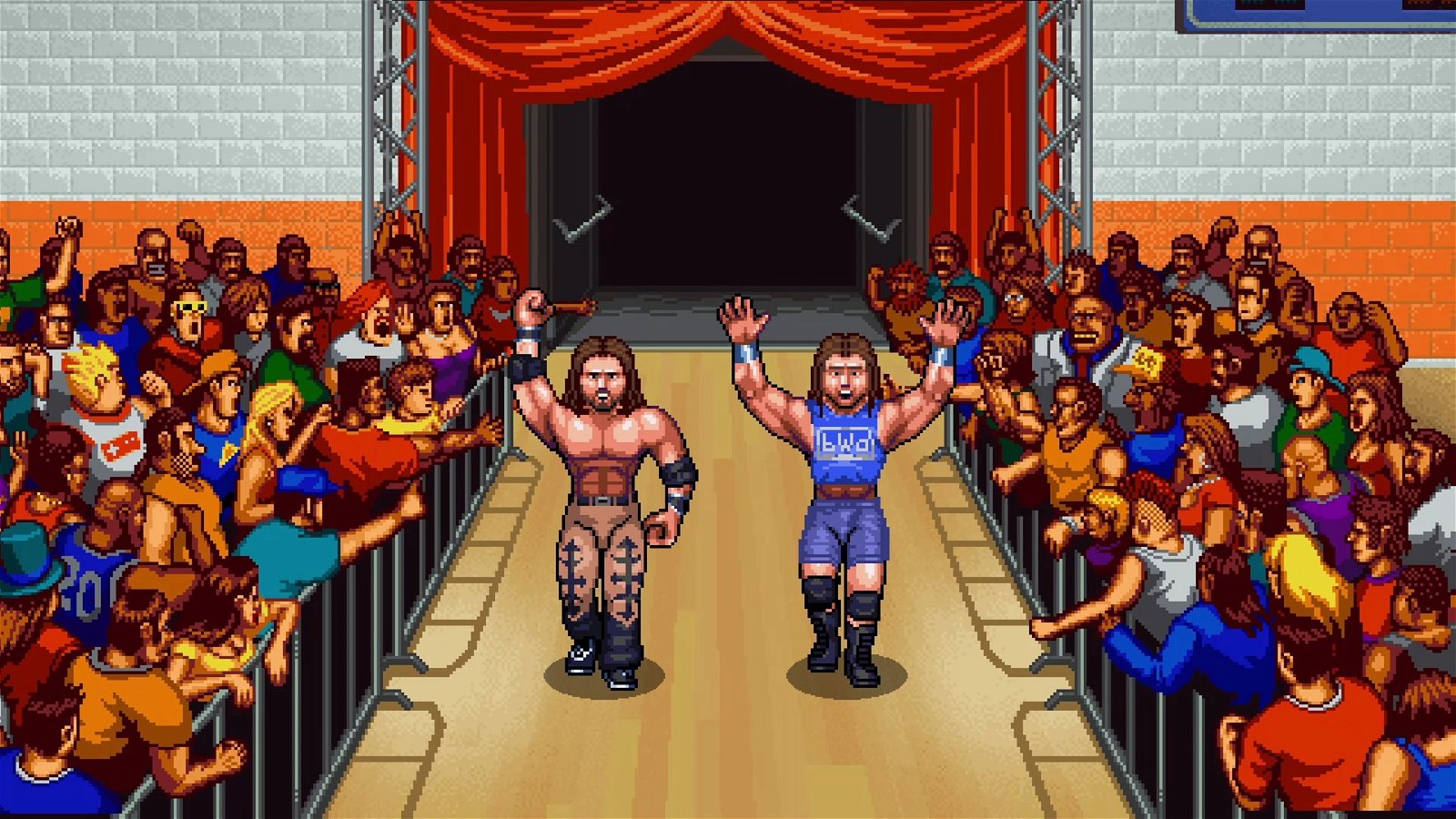 Old-school gamer that I am, I think it’s absolutely criminal that we never got a home console conversion of either Technos Japan’s WWF Superstars (1989) or WWF WrestleFest (1991). Made by the same studio that brought us iconic, classic beat-em ups like Renegade, Double Dragon and The Combatribes, they were the first officially-licensed WWF Arcade games to be released, combining just the right amount of late-80’s World Wrestling Federation swagger and personality with Technos’ violently addictive brand of quarter-munching fisticuffs. Such is the magic recipe that Retrosoft Studio’s RetroMania Wrestling aims to recreate, and it gets a good part of the way there thanks to its large, detailed character sprites, challenging, fast-paced ring matches and a catchy Sega Genesis-inspired synth soundtrack.

The campaign (“Story”) mode, which follows the comeback of wrestler Johnny Retro as he returns to the ring following a devastating injury at the hands of his most hated rival, tells a rather entertaining story in-between matches filled with the same sorts of nonsensical drama we’ve come to expect from WWE programming like Monday Night Raw and WrestleMania.  Fast alliances repeatedly come together and break apart on the turn of a dime (and vice-versa) thanks to  backstabbing team-members,  surprise attacks (or rescues) during a victory speech on the mat, and interestingly enough, the unforeseen consequences of Johnny’ Retro’s prideful or selfless actions in a previous cutscene.  You see, at some point during most cutscenes the player will be given a binary dialogue option that will influence how the next chapter and/or match will unfold), keeping players more engaged in the narrative and giving them more agency in what sort of “Face” or “Heel” they want their Johnny Retro to be.  The writing is quite funny and the story doesn’t take itself too seriously, which is a good thing as the intentionally goofy caricatures and art make the prospect of doing so next to impossible.

The cutscene art is uneven, however.  While they do get the job done, the occasional comic-book action scenes (such as when a wrestler gets ambushed in the ring) are drawn rather poorly and look more like unfinished storyboards done by a completely different artist or team than the artist or team in charge of the animated talking-head scenes. It’s still a lot better than anything that Superstars or WrestleFest ever gave us though.

On the other hand, the in-game 2D pixel art character models look great and manage to emulate the old Technos arcade-aesthetic while also maintaining RetroMania Wrestling’s own distinct character look, although the wrestlers somehow manage to look even more generic than the stoic, Easter Island Moai-faced fighters of the Technos games.  Furthermore, RetroMania blatantly re-uses many of the same assets for its wrestlers.  In fact the large majority of them share the same face and haircut, with only a mustache, goatee or beard to differentiate them.  It’s especially obvious when two tag-team wrestlers of similar build make their ring entrance side-by-side.

“…one could argue that a big part of the game’s appeal is simply mashing the attack buttons over and over.”

Like the Technos WWF arcade games of old, RetroMania Wrestling features a very straightforward control system, which maps weak, medium and strong attacks to the X, A and B buttons, respectively. The A button can also be used to pin opponents, the Y Button is used for running, RB performs your chosen wrestler’s signature taunt and LB tags in your teammate or initiates team moves in Tag Team matches.  Naturally, these buttons will cause different moves and actions to be performed when combined with other buttons or executed under certain circumstances, and much like in the aforementioned Technos games and their 90s contemporaries like Acclaim Entertainment’s WWF Raw (1994), one could argue that a big part of the game’s appeal is simply mashing the attack buttons over and over and gradually uncovering the game’s many special moves on one’s own as they randomly occur.

That might be the case, but even taking that into account I found that RetroMania Wrestling does a poor job of teaching you how to play it thanks to the woefully brief campaign tutorial it provides at the outset of the game.  Aside from the basics that I already listed above, the player gets a simple control legend in the pause menu plus an advisory on what certain flashing colour indicators mean (i.e. If your wrestler flashes green in a grapple, that’s a sign that he’s won the grapple, if he flashes yellow, the grapple is a stalemate and it goes to a punching match, and if he flashes red he’s almost certain to lose the grapple), etc.  Beyond that, many of the core mechanics (such as winning and/or reversing grapples) are random and are not fully within control of the player, which can make the warnings that the game frequently gives mid-grapple such as “Too Early” and “Low Momentum” a bit annoying.  Since a grapple can be passively initiated just by coming into contact with an opponent and the enemy AI is rather aggressive, it’s often impossible to control one’s timing as to when or how fast a grapple starts, which inevitably results in a mash-a-thon against the AI.

“RetroMania Wrestling does a poor job of teaching you how to play.”

It just seems to me that players would be better served by a simple power-meter above the two grapplers’ heads that would better clarify who has the upper hand and how much of a chance the underdog has of turning the tables.  Reversals happen often, which help to maintain a sense of randomness and unpredictability, but there doesn’t seem to be any rhyme nor reason as to how they are successfully performed (other than mashing).  Also, for better or worse, the large majority of special moves for each of the game’s 16 wrestlers as well as many of the standard, bread-and-butter moves (like tag team attacks and tossing opponents out of the ring) are intentionally hidden or unexplained, requiring players to either develop an eidetic memory to learn how to get better as they play or consult an online FAQ.  Such was the way with games like WWF Superstars and WWF Raw back in the 90’s, and Retrosoft Studios clearly wants to emulate that sense of mystery and level of difficulty here.

For the type of game it is, RetroMania Wrestling offers a good deal of content.   At present, the game offers 16 playable wrestlers (including the real-life WWF tag-team duo Hawk and Animal a.k.a. The Road Warriors), over 15 unique arenas, eight different match types, three match option variants and three main modes of play: Story, 10 Pounds of Gold (an Arcade-style ladder climb of matches in order to reach the top of the heap and seize the NWA Championship Belt), and Versus, boasting a total of over 50 different match variations that players can enjoy by themselves or with up to 8 of their friends via local couch co-op.  Retrosoft Studios has also tentatively promised additional DLC, such as additional wrestlers as well as online multiplayer, provided “the game has enough support”.

“…it’s not a very progressive title.”

Regrettably, while RetroMania Wrestling’s campaign purports to take place in modern-day, it’s not a very progressive title. Right to the point, there are no playable female wrestlers, or any women in this game for that matter, outside of some random female character sprites in the audience. Even 1994’s WWF Raw had the American-Canadian wrestler Luna Vachon in its lineup, and Superstars actually featured Miss Elizabeth as an NPC (though disappointingly she was more of a damsel to be fought over than an actual character), so it seems strange for a modern game like RetroMania Wrestling to lean-in so hard on nostalgia yet not offer a female wrestler as part of its roster.  Perhaps this a shortcoming that a yet unannounced DLC update or full-fledged sequel can ultimately address.

While Not Perfect and Sorely Lacking Playable Female Characters, Retromania Wrestling Is an Enjoyable, Feature-packed Love-letter to the Late 80’s and Early 90’s Era of Wrestling Videogames and the Wwf in General. 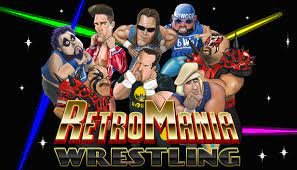