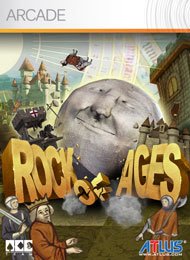 The initial reaction to Rock of Ages is “Huh…that looks weird.” It’s true, of course, it does look weird. Not many games cast you as a giant rock. Fewer still cast you as a giant rock who’s been battling with historical figures since the dawn of time. The art is even curbed from these periods, making this one of the more visually eclectic titles of the year.

Take it apart, though, and you have a slightly more conventional game. As a giant rock, you go through twisty mazes and try to survive hazards to get to the enemy gate and smash it down. In that sense the game feels like a 3D Marble Madness, or Super Monkey Ball. Like those games, the biggest challenge is manoeuvring the sluggish boulder around the environment. Complicating that is an enemy (Did I mention that you’re going against various historical figures? Leonardo DiVinci, Louis the 16th, Marie Antoinette, Aristotle, to name a few) trying to do the same on an identical course. Your only weapons against your enemy (and visa versa) are units that can be built on your course between runs. These include catapults, towers, raging elephants that push against the rock. These can slow you down, or worse, chip away at your health, making you start from the beginning of the course.

These units, for all their variety, do very little in practice. The trick of the game becomes apparent quickly: go through a course as fast as possible. Spamming the enemies course with cheap disposable items usually slows them down enough for an easy victory. For all the strategy the game tries to introduce, there’s actually very little necessary. There are boss battles every few stages. They do add a bit of variety, but because of the sluggish control, they can turn into prolonged slogs really easily.

Ace Team’s first big game was, to most gamers, Zeno Clash. It was FPS as hallucinogenic experience, with a character who fought with his fists and was on the hunt for his hermaphroditic Father-Mother through dadaist landscapes. The old genre with enough of a twist to seem fresh. It almost seems inevitable that they would pair with Atlus, itself a curator and provider of the weird, for Rock of Ages. The game is suitably weird, but at times, that seems to be the only worthwhile.

The initial reaction to Rock of Ages is “Huh...that looks weird.” It's true, of course, it does look weird. Not many games cast you as a giant rock.
REVIEW SCORE
5
File Under: Microsoft, Xbox