Ruin of the Reckless Review 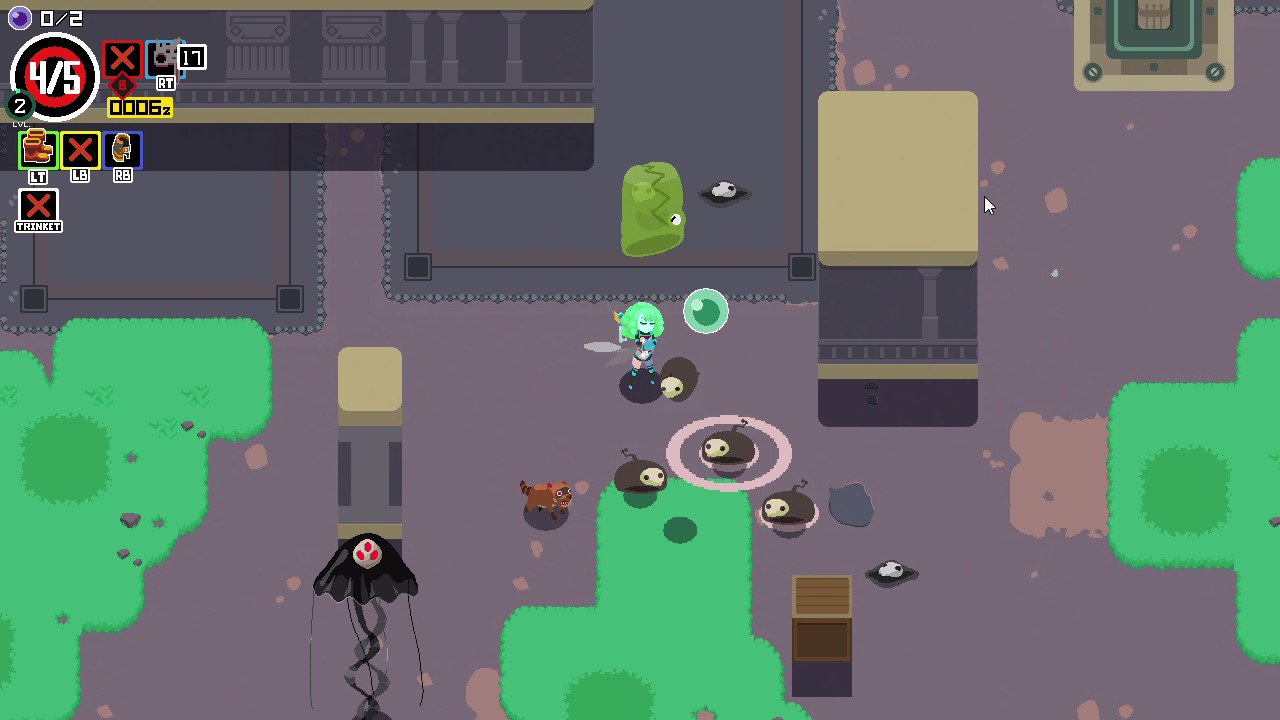 Ruin of the Reckless is a fast-paced roguelike where death comes fast and often. It only takes a few screw-ups—a second of inattentiveness, or making a mistake with the handful of different equipment and weapons you can use—to end your run. Having to only attack enemies at melee range increases this pressure, making for a roguelike that is fun in its speed and challenge. As long as you can learn to juggle it all, that is.

Like most roguelikes, Ruin of the Reckless doesn’t screw around. Within a stage or two, it will start throwing hordes of enemies at you all at once, each with their own attack styles and mechanics. Creatures will attack at range, dodge your character, or weave around the map—all of which the player has to deal with at the same time. Beating them up typically doesn’t involve anything more than getting in their faces and punching them (or using whichever melee weapon you happened to find), but with the sheer number of foes and ways in which they’ll attack you, you will get hit, and often.

Players begin with five units of health and very little in the way of invincibility time, so expect death to come in a hurry if you aren’t careful. Luckily, the game offers a high-speed dash that balances this danger out. You can leap out of the way with a quick tap of the button, shooting yourself out of harm’s way. You can only go a short distance at first, though, so you may have to hammer out a few dashes to get away.

Between the enemies and these basic mechanics, you already have the beginnings of a tense roguelike. Enemies attacking in huge groups; their attacks going off all around you as you carefully time your dashes to weave between impacts, all while burying your knuckles into enemy faces—it’s appealing to play. It’s also fast, and with a ton of screen shake following the action, so you can feel the tension and impact.

These basic skills get several kinds of additions, too. Players can equip new weapons that alter their basic attack, such as more powerful fists with greater range or magic spells with all manner of effects. Players are also able to strengthen their character with equipment that can grant useful buffs or helpful pets, new boots to alter dashing and magical spheres that will grant better passive effects. All of these are randomly dropped throughout the dungeon, offering all manner of ways to change up combat.

Whether you enjoy it or don’t, each playthrough is vastly different based on all of these skills and items. There are many different things the player can pick up, and each stage tends to have at least five or six new ones players can add on in moments. This encourages a lot of experimentation, and demands players stay fluid with their combat styles. It’s enjoyable to have vastly different builds on each run, and even just learning what they’ll do adds enjoyment and a sense of discovery to the already satisfying combat.

That being said, all of this can be quite overwhelming for some time before the player can handle it all. Combat is fast and hairy, so dealing with dashing and attacking can be a handful on its own at first. Having to juggle that with wondering whether that dropped power-up will vastly change your combat style and throw off your fight makes for difficulties as well, as does the strict time limit on each stage of the tower. The game pushes players to go quickly through its combat and time limits, so it can be off-putting for players who need a bit more time to take in all of what’s going on.

Another nuisance of the powers is that they don’t tell you what they’ll do before you pick them up. You get a name, and if you’ve been playing long enough to remember what it does, then you’re all right. If you’re new, you’ll have to grab it to find out. With weapons and some equipment, that’s not a huge deal, as you’ll drop your existing weapon on the floor in exchange. Players can quickly switch back if they find themselves using one they don’t like.

Not all items work like this, though. Some equipment, like the buffing orbs, are stuck on your character and cannot be replaced, taking up a slot that more useful powers would hold. Some weapons and armour are also cursed, and cannot be removed once equipped. This is likely fine for long-time players who want a challenge forced on them, but it can make for some miserable runs for people who are just starting out when they pick up a bad piece of equipment and lose the one they’re used to. Most roguelike players are in for the long haul, admittedly, but it makes learning the game take a little longer than it needs to.

Ruin of the Reckless has a few more oddities that don’t really harm its gameplay, but do take away from it somewhat. Its music is good for players who like high-energy chiptunes, and it matches the speed of play, but it doesn’t seem to sit well with the game’s story of ghostly characters climbing a tower to be granted a wish. It’s a minor gripe—the music is good, but feels out of place.

When players learn it all, Ruin of the Reckless makes for some frantic fun. There is so much equipment and so many items to put on your character that every run feels wildly different. The enemies are relentless, and work well in tandem, giving the player a variety of things to factor in as they fight, and all while a timer clicks down, bringing much worse danger if the player doesn’t finish a level quickly. It’s undeniably appealing, and is one of those games that will keep bringing players back for one more run.

When players learn it all, Ruin of the Reckless makes for some frantic roguelike fun.