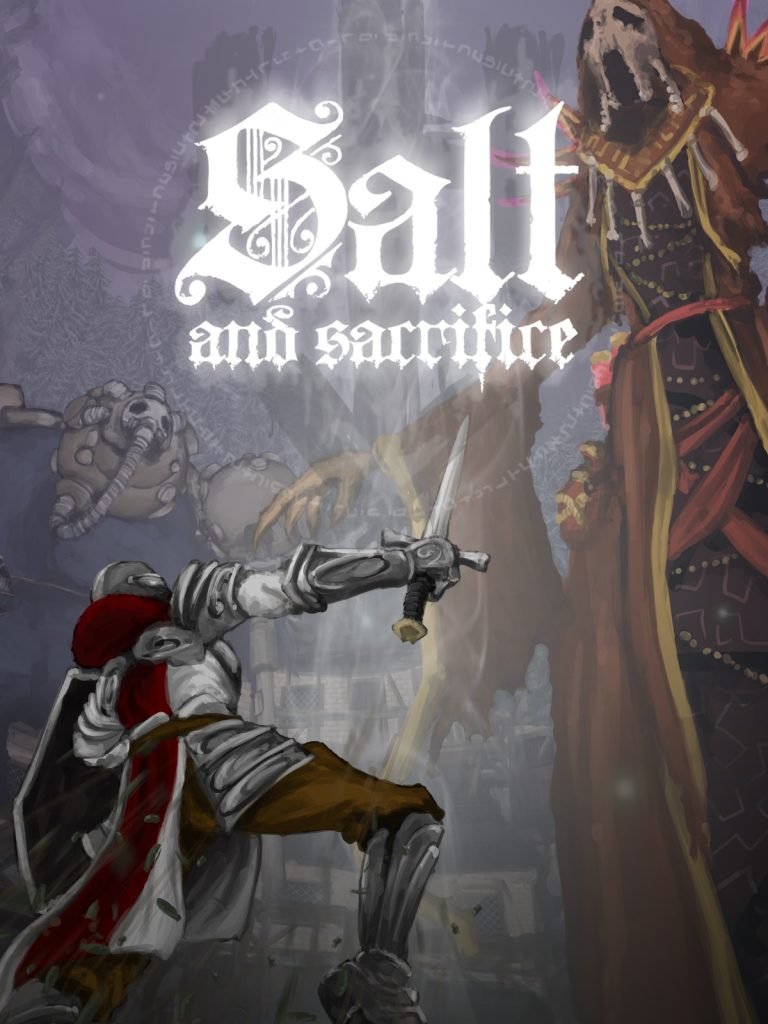 I’ve talked about the bizarre landscape that is the indie space at length, but I remember when I first began exploring this biome, with a mixture of curiosity and excitement for what I might find. It was in the early days of the Xbox Arcade, when Microsoft began creating a space for indie games on the Marketplace that I saw a strange icon for a game titled The Dishwasher: Dead Samurai. I thought it had to be a joke, so I decided to try the demo the game had, and I was immediately hooked. It had a grungy art style, a heavy metal soundtrack, and fast-paced combat inspired by games like Devil May Cry.

I have kept a close eye on Ska Studios since then, and back in 2016, when I saw they were making a Soulslike in their iconic style, I had to play. Salt and Sanctuary felt like the perfect fusion of The Dishwasher and Dark Souls, but surprisingly I didn’t end up playing much of it, falling victim as it did to my gaming backlog so many games did in 2016.

But their follow-up, Salt and Sacrifice, has me well and truly hooked, not only improving on the elements of its predecessor; but finding a way to incorporate elements of newer From Software games, while still feeling uniquely its own. I revisited Salt and Sanctuary in the lead up to reviewing this game, and it’s amazing how different it feels, while still maintaining Ska Studios unique style.

Salt and Sacrifice puts players in the role of a Marked Inquisitor—condemned criminals who, in lieu of the punishment for a particular crime, become deathless warriors tasked with defeating the legions of Mages who are warping the land with magic. In both Souls and Salt fashion, there’s more going on to the story than what’s perceived, delivered in small, esoteric pieces that are left for the player to interpret, which only adds to the mystique and intrigue of the game.

Salt and Sacrifice’s gameplay is fairly similar to that of its predecessor—maintaining the exploration elements of Metroid with the combat and RPG elements of Dark Souls—but improved in many small ways. For starters, Salt and Sacrifice feels much faster than its predecessor, with both movement and combat feeling much more fluid. Extra features like a sprint, and wall-jump allow for greater flexibility in traversal.

“Salt and Sacrifice feels much faster than its predecessor, with both movement and combat feeling much more fluid.”

Adding to the exploration elements, players will unlock tools like a grappling hook, or magic ziplines to not only quickly move around, but access places previously blocked off—the signature Metroid backtracking. While combat still remains a pretty technical affair, as players need to manage their stamina and limited healing items, the increased speed of combat, multiple new weapons reminds me a lot of The Dishwasher in its style and fluidity—it could also be that my main weapons are dual daggers and a katana.

Furthermore, Salt and Sacrifice’s level up system remains the same as its predecessor—which was a bit surprising as one of the trailers for the game showed a more traditional Soulslike skill point allocation system—where levelling up only increases your maximum health, and stat upgrades and ability perks are chosen through the Tree of Skill. But small improvements, like a fairly basic crafting system, or a Dark Souls-like system where dying reduces your maximum health unless you restore your “Flesh” with a consumable item.

But the biggest feature added to Salt and Sacrifice is the Mages—powerful magic wielding bosses that can be found throughout the land, or through desecrated corpses which assign them as quests. While these fights are intense and interesting in their own right—as players chase down Mages, chipping away at their health while they summon powerful elemental monsters, culminating in an intense final showdown—they also grant access to powerful elemental armour and weapons that can be crafted from the parts gathered from the Mage.

“Adding to the exploration elements, players will unlock tools like a grappling hook, or magic ziplines to not only quickly move around, but access places previously blocked off…”

And while this is a unique and fun little system, it does take a bit away from the lore of the world, as after you defeat a Mage, you are confronted with the pathetic remains of the warped soul who was corrupted by magic, as they explain their mad reasoning for the corruption. But when you see the same Mage again—a necessity for gathering materials—it’s definitely not as exciting the second time.

But Salt and Sacrifice definitely feels a lot more approachable than its predecessor. I was thinking about how I never got very far in Salt and Sanctuary before diving into this game, and part of the reason, I think, had to do with the game’s slow pace and somewhat esoteric world design—which was a bit harder to work out for a 2D game without a map.

But while Salt and Sacrifice does have a fairly large world, with several areas to uncover and explore, it assists the player by having them approach everything from a central hub area: from levelling, to weapon crafting, to accessing different areas or Mage hunts through a warp gate. While this does still put some onus on the player to remember the layouts of the many areas, it does make getting around a bit more manageable, and more convenient than its predecessor.

“But what I really love about Salt and Sacrifice’s visuals compared to its predecessor is how much more colour and light it has!”

Visually, Salt and Sacrifice maintains Ska’s unique style that always reminded me of Jhonen Vasquez, or the edgy art the one punk rock kid you knew in high school used to draw in his notebook, but in a wholly charming way. Characters are uniquely drawn, and well animated, boss monsters, in particular, are truly horrifying, and each area has a distinct dark charm to it. But what I really love about Salt and Sacrifice’s visuals compared to its predecessor is how much more colour and light it has!

While I always loved the monochromatic style, mixed with small splashes of red of The Dishwasher, the muted palette of Salt and Sanctuary was one I never really liked, making the world feel a bit dull and lifeless—and not in the beautifully bleak way of Dark Souls or Bloodborne. Salt and Sacrifice fills not only its characters, but its entire world with vibrant colour, that only accents the horrifyingly twisted landscapes and monsters.

Musically, Salt and Sacrifice maintains Ska Studios‘ use of grungy metal music, but is accented with bombastic orchestral scores, and some quiet, more quiet musical arrangements that add a beautiful sadness to the world. Intense strings compliment the electric guitar during boss fights, while subtle mandolin adds a sombre sense of calm to certain areas of the game.

I honestly didn’t expect to love Salt and Sacrifice as much as I did, considering I didn’t fully get into its predecessor, despite my love of Ska’s previous games, and my love of Soulsborne games. But this game managed to hook me not only with intense, methodical gameplay; but a great sense of style and improvements on its own gameplay that make the whole thing insanely fun. If you’re a fan of the series or the genre, then you’ll definitely enjoy this one!

Salt and Sacrifice is bloody, brutal, and beyond enjoyable!
REVIEW SCORE
9
File Under: Salt And Sacrifice, Ska Studios, Soulslike