Wide as an ocean, shallow as a puddle 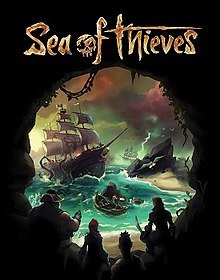 After not having released an all-new game since Kinect Sports, the developers at Rare are back four years later with the multiplayer seafaring pirate adventure Sea of Thieves. Was it worth the wait? No, not at all. After having played in the game’s alpha and beta I feared that the full game wouldn’t offer much in the way of depth or content. Turns out I was right.

After selecting from a group of randomly generated pirates, which while most are quite ugly to look at, do offer playing as plus-sized characters which is a rarity for gaming. The game literally just drops you in with no tutorial, and no instructions; just spawns in a tavern and that’s it. There are various shops around with characters that you can make small talk with to get basically all the lore I’ve been able to find in the game, which is not much, as well as buy items and take on voyages. From here, Sea of Thieves is a series of three slightly different fetch quests with a peppering of optional but sometimes unavoidable player vs. player battles, all in the name of earning gold to buy cosmetics and earn reputation with three different companies.

The Gold Hoarder sends you to find treasure chests that are marked on a map. The maps just show a picture of an island which must then be located on the world map on your ship. Once on the island, suss out where the “X” is and dig to find a chest, then take it to the nearest outpost to turn in netting gold and leveling your reputation with the company.

The Order of Souls provides quests to find and slay boss skeletons. Here, instead of providing a map this company simply says what island the skeleton was last seen on, which can be found on your map as all islands are labeled. Once at the destination a few waves of skeletons must be slain before the boss skeleton spawns. The boss skeletons have more extravagant outfits on and take a lot more damage than the vanilla skeletons. Once defeated the bosses skulls must be returned to the company again for gold and reputation.

Finally, there is the Merchant Alliance. Their quests require finding and delivering supplies or animals to specific destinations. Upon accepting their quests, they give you any objective items required such as an equipment crate that holds 50 cannon balls, or cages for chickens and pigs. The required items can be found on pretty much any island, and then must be delivered to a specified island by a certain time and date.

As voyages are complete for each company they continue to level and grant more expensive quests that grant more gold but are also more difficult. The late game requires getting all three companies to level 50, at which point your pirate becomes “legend”, although it is unclear what exactly happens. I can tell you whatever it is, there is no way it is worth the grind. Just for an idea of how long that would take at the time of writing I’ve sunk around 20 hours into the game to get to rank 15 with each company. Levelling companies is the only thing that could be considered progression in the game, as everything you can earn and buy with gold is purely cosmetic, meaning there are no stronger weapons or clothing that grants more health or defence than those that you start with.

Aside from the core fetch quests, there are at least a couple of other optional objectives to complete. One being taking down the monstrous tentacles known as the Kraken. I say tentacles because that is all it is, just a slew of giant tentacles that stick up out of the water attached to no physical body underneath the waves. Considering the Kraken was hyped up prior to release makes the lack of body both perplexing and lazy on the developers part. This bodiless creature shows up randomly and can potentially take down your ship and any loot aboard. Slaying it nets you one lousy achievement, which would be more impressive if it weren’t quite easy to do.

The other optional quest is invading and looting a skeleton fort. The skeleton fort can be found wherever a giant skull cloud with glowing eyes is seen in the sky. These forts are surrounded by cannons manned by skeletons which must be slain to ensure your ship stays afloat as you battle in the fort against waves of increasingly harder skeletons. Skeleton forts are easily the most challenging things in the game that I’ve been able to find.

That said, the combat in Sea of Thieves isn’t all that enjoyable thanks in part to its simplicity. Players can carry two weapons at a time which can be any combination of a sword, a pistol, a shotgun, and a sniper rifle. While the guns are nice, they are mostly reserved for moments where ranged combat is needed—like when fighting gun wielding skeletons or the kraken—due to holding so few bullets. Bullets can be reloaded at boxes on ships and tucked away in skeleton forts. This means most of the time you’re clunkily swinging your cutlass at skeletons, which has a slow three attack combo, or a strong charged attack that can kill low tier skeletons with one hit.

The sailing of ships isn’t much more exciting. There are two different types of ships in Sea of Thieves, a larger ship with three levels and three sails meant for crews of two to four players, and a smaller ship with one sail and two levels meant for crews of one or two. On larger ships one person pilots the ship while the others raise and lower the sails to catch the winds, as well as navigate, watch out for other ships, or points of interest such as shipwrecks that sometimes hide loot, and patch up any holes taken from landfall or cannon fire. On smaller ships, this can all be done by a single player without much fuss.

Sea of Thieves is one of those games where the core game itself is rather simple and the amount of fun one has is mostly decided on by their attitude and that of the people they are playing with. Thanks to the game’s matchmaking I was easily able to join another crew of three other pirates. While things were a little awkward at first as we made small talk via voice chat, we eventually found ourselves invading a skeleton fort with a fifth random solo player helping us for a cut of the loot, then celebrating with him by playing a pirate-y song together before making him walk the plank. Another moment had us being attacked multiple times by a crew of two players over and over as we continued to slay them and taunt each other via the game’s proximity chat and on the ghost ship that serves as the waiting area for respawns and has the added bonus of applying a spooky effect to voices. Thankfully everyone had good spirited fun, but surely not all the pirates out there will be as nice.

If you were considering getting Sea of Thieves to play solo, don’t. Playing alone is doable, but makes everything take twice as long minimum thanks to only being able to carry one piece of loot at a time. On top of that, if you ever get attacked by another ship, chances are it will have two to four players aboard it which guarantees you can kiss your loot goodbye. That said there is a limit of 6 ships and 16 players per session*, which isn’t much considering that the map is quite large.

If I had to level some praise on Sea of Thieves it would be that the water looks amazing. Like, I’m talking the best water I’ve ever seen in a video game, which is surprising since everything else looks cartoony, rather bland, and uninspired.

Having a shallow amount of variety and content is just one of Sea of Thieves issues. While the game mostly ran smoothly while playing on PC, I had occasional dips in the frame rate on my Xbox One X where the frame rate is already capped at 30 frames per second max. Another issue the Xbox version has is that it’s quite hard to see at night, especially if playing with HDR on, even on my properly configured LG C7. I experienced some hitching and stuttering on both versions that seemed to be caused by issues with the servers since my character would suddenly be a few feet away from where they were standing a second ago. At one point a skeleton I needed to kill was stuck inside of a giant rock, but thankfully I was able to slice into the rock to slay them after finding them thanks to their hissing. Not the end of the world, but issues worth noting.

Right now Sea of Thieves is like a game that should be offered for $10–$20 maximum as an early access or game preview product. I’d even go as far as to say that it feels like a free-to-play game, seeing as there is such a grind. There just isn’t enough content or depth here. Its core gameplay is grinding repetitive fetch quests and not a whole lot else. The progression here just isn’t fulfilling, and fun factor depends on who you’re playing with. While the developers have said they plan to add more content post-launch, they haven’t been able to really specify what that means exactly other than cosmetic pets which are coming in the form of paid DLC. This game has such potential, but it just needs a whole lot more to it, as it’s easily the most shallow AAA title I’ve ever played.

I know many people will make excuses for Sea of Thieves since it’s the first of Microsoft’s first-party titles to launch simultaneously on its Game Pass service that lets you play over a hundred games for $10 a month, but they also offer it for sale at retail as a full priced title. I feel sorry for the people that buy this game outright as it’s vastly overpriced, and I’d urge potential players to play via the free two week trial of Game Pass before spending any of their doubloons. Microsoft should be ashamed of itself for daring to sell this game at full price. Xbox players deserve better.

*[UPDATE] Editor’s Note: some reports indicate a possibility of up to 24 players per session, although this has not been confirmed by Rare or Microsoft.

Sea of Thieves feels like a game that should be offered for $10–$20 tops as an early access or game preview product. There just isn't enough content or depth here, its core gameplay is grinding repetitive fetch quests and not a whole lot else, the progression here just isn't fulfilling, and fun factor depends on who you're playing with.
REVIEW SCORE
5.5
Buy On Amazon
File Under: Action, Multiplayer, Rare, Sea of Thieves