A shooter with fossilized execution
SCORE: 7/10 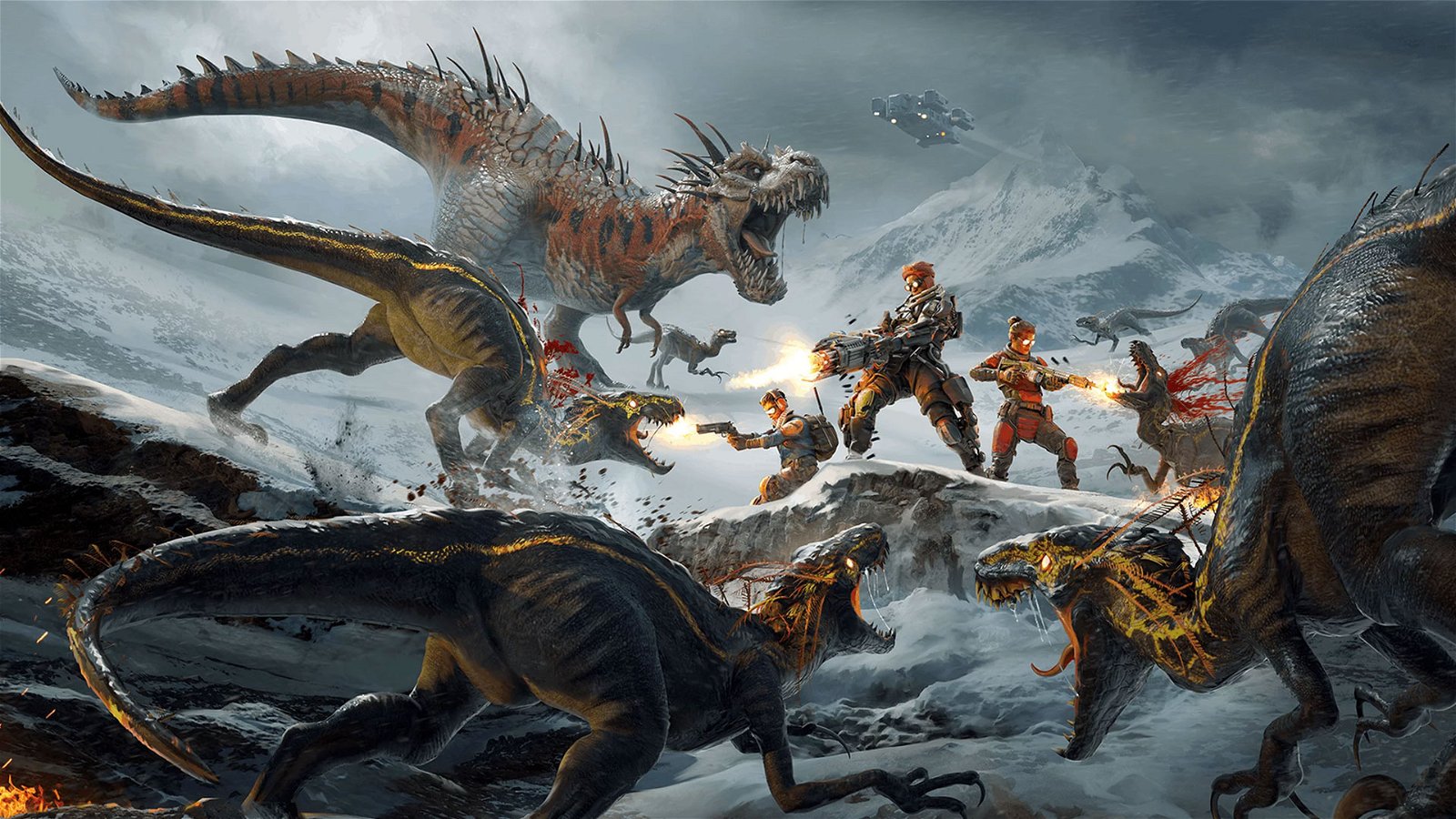 I had high hopes for Second Extinction. My excitement for it came as a shooter which took full advantage of its Jurassic influences in a cooperative shooter. It’s also marketed as an experience which threw legions of ferocious animals at players until frustration and boredom set in.

Quite frankly, the team at Systemic Reaction has delivered on atmosphere and frantic dino action. Second Extinction feels like a refreshing game which takes players away from human-driven shooters, but grows old from generic mechanics and a lack of depth as an Early Access title. The result is an underwhelming, messy experience which leans too heavily towards multiplayer for it to be enjoyable. Its content at launch also falls flat, even when it gives players a somewhat enjoyable dino-killing shooter until it leads absolutely nowhere.

The game benefits the most from its focus on dinosaurs. Second Extinction does a great job at making its starring menace the sole enemies player have to mow down across its ten-plus hour experience. But this is also as far as it goes as the dinos become less of a threat and more of an annoyance later on. Second Extinction is also built around their presence, as Earth had been mysteriously taken over by beefed-up versions of the dinosaurs. As a futuristic soldier in the Emergency Response Agency (ERA), players arm up and drop back on Earth to save researchers and wipe dinosaurs out. For fans of Turok or Dino Crisis, the story can feel a tad bit familiar and tolerable. It’s also Second Extinction‘s launching point for mindless dino shooting, which quickly makes you forget about its story altogether.

There’s no narrative payoff in the game’s ten missions while its world-building does little to make the dinosaurs more important than they could have been. They’re simply there for target practice. Its character also fall in the same trap as they merely serve as classes and options for players. Second Extinction‘s multiplayer focus takes too much away from each character, to the point where their voice acting is wasted for repetitive emotes and the same reloading lines. It would have been nice to see some dialogue interactions between characters and scripted lines to expand the world around them, But there is none of that to be found, even when Second Extinction attempts a campaign-less approach like Overwatch and Titanfall which sewed deep lore into gameplay. Its open world even uses a non-linear approach like Breath of the Wild, but lacks immersion by failing to use its environment to tell a story. For a world taken over by dinosaurs, its locations look surprisingly clean and devoid of any human remains or traces of the invasion. I would have at least loved to see collectibles, such as audio logs or even text players could read on walls.

The open-ended world is chock-full of terrain and open areas for combat. It’s specifically tailored for players to create distances against hordes of dinosaurs and works well. But navigating from objective-to-objective can be a tedious slog at times. This comes from players constantly sprinting from one location to another. The in-betweens are empty as players are constantly staring at nothing but empty roads, rocks and canyons in their jogs. Second Extinction missed an opportunity to give players ways to travel quicker across locations, including a surprising amount of vehicles which can’t be used (but sit as props). Instead of driving in a jeep with buddies, we’re aimlessly wandering from passage to passage towards objectives. There’s a somewhat decent variety of multiplayer-like objectives, including escorting a bomb into a hive or defending a dropship. But these become repetitive across the game’s already short length at launch. Tasks like recharging a generator, opening a hangar or replacing a battery quickly are abundant and add onto the endless noise of spraying lead at dinos.

Second Extinction‘s lack of depth is reflected by its overreliance on gameplay, which can get stale in longer playthroughs. That’s not to say that the game isn’t fun (at first). On Early Access, players drop into an open environment with two others. A set of open-ended objectives are scattered around a fairly big map for players to explore, while giving it some direction. But players are also opening fire at mobs of dinosaurs vying to rip them apart. My first hour was an exciting and challenging skirmish as the horde started charging at us. This is where Systemic Reaction has built solid first-person gunplay mechanics from their first game Generation Zero. There’s an incredibly great feedback with aiming weapons and firing, while using equipment is just as seamless. Players have more dexterity and comfort they should expect in an online shooter, especially when Second Extinction throws countless dinos in the mix. Its targeting is also snappy at dinos who can move incredibly fast through the screen. For a fast-paced setting, its shooting controls fit for quick maneuvers and running and gunning tactics.

For some god-awful reason, Second Extinction‘s enemies border on cannon fodder to being ridiculous bullet sponges. Technically, the game nails its framing for deadly, savage dinosaurs that are basically unstoppable without a team. The standard raptors are your typical units who charge and bite at players. They’re easy to take out with a few shots, but are deadlier in numbers. They also use a really weird pounce attack which always locks onto players and lands a hit no matter how far they are. For a game that constantly has players reloading, the raptors barely give them a chance as they fly over like an aimbot missile. The Acid Raptor spews pools of bile at players, chewing away their health and slowing movement. But there’s barely a fighting chance as their shots are highly accurate with a ridiculous amount of velocity. They are also incredibly annoying as they spawn way too frequently as standard grunts, firing a never-ending volley of acid. Diggers are highly-armored raptors which can burrow and teleport closer to enemies for sneak attacks. But like the rest of Second Extinction‘s overpowered dinos, it takes about a full magazine-and-a-half of a minigun to take them down. The Watcher belts out a signal to alert dinos if they spot teams, but are the only decent enemies in the game players can take down with a balance of skill.

The game’s main attractions come from its bigger dinos, comprised of crowd-pleasers like the T-Rex, Triceratops (Bulls) and Ankylosaurus (Flatbacks). They are decently tweaked for heavy damage while showing weaknesses highlighted in blue. But Second Extinction‘s lack of adaptive difficulty settings make these dinos a nightmare for the wrong reasons. Larger dinos are practically bosses, which becomes more ridiculous when one player takes on two or more Flatbacks at the same time. When backed by smaller grunts, it’s actually pretty annoying as players are constantly knocked down and bigger dinos move in with unavoidable attacks. Dinos will often spawn from hives, resulting in infinite waves if players don’t destroy them. But even these are incredibly difficult to take down, even with a handful of magazines and all of your grenades.

The game’s biggest problem comes when Second Extinction‘s dinos give teams a run for their money. But it absolutely torments players going solo. An optional single player mode doesn’t work in a game built for cooperative action. As a result, typical problems like overpopulated dinos and barely noticeable difficulty changes add to the frustrations. Dinos are even harder to take down individually when they collectively circle-in on you. Ammo burns out faster against the bullet-sponge dinos who are relentless. It’s also impossible to use the single player self-revive feature since dinos would relentlessly interrupt your animation by attacking. In times where matchmaking is unreliable, players resorting to playing a solo campaign are in for an empty and frustrating experience.

Of course, the first line of defense against dinos are bullets. The game’s guns are also lacking in variety, with players only getting a handful of options all classes can use. Apart from a pistol and shotgun, most of the game’s unique weapons are reserved for their characters. In true online multiplayer fashion, characters like Ortega have an assault rifle for that traditional grunt feeling. Jurgen acts as a sniper who quickly becomes redundant with the game’s close-quarters dinos. Rosy is a heavy-class minigun expert who stands the best chance against legions of dinos from all distances. Amir is a crowd-control class with a high damage grenade launcher good for armored dinos.

It’s a grind to experience Second Extinction with an arsenal which should have been available from the start. Guns like the SMG, carbine and revolver are unlockable secondaries which are serviceable at best. Apart from heavier options like the minigun and grenade launcher, everything else feels utterly useless against enemies. This makes players feel like they’re chewing through more ammo than necessary to take one dino out. It’s even worse against larger foes which feel nearly impossible to take down with one assault rifle or sniper. I was only able to beat a good chunk of the game by relying on Rosy for firepower against the dino mob. Players can border on frustration as they burn through ammo and reload every ten seconds as dinos pounce at players.

Overall, Completing a mission in Second Extinction will let players upgrade their arsenal with resources and XP gathered. But for some reason, upgrading is streamlined into a strange token system which grows a stat (Handling, Stability, Impact). Another token and additional resources are needed to unlock perks, locked as a layer under the upgrades. This makes upgrading even one weapon incredibly more tedious than it should be. Players would also have to endure playing as their already-underpowered classes a lot in order to have real fun in Second Extinction. Early on, it’s almost as if all of Second Extinction‘s weapons start as competent weapons against standard raptors and pea shooters against everything else. It’s baffling to wonder how a shooter like Second Extinction can make its guns a weakness as players try to survive.

Unlike Generation Zero, Systemic Reaction’s latest game almost felt cobbled together as a pretty, but barebones shooter. At early access, Second Extinction only comes with six missions under its Tundra Campaign. These also serve as the levels for both single and cooperative modes. It’s suggested more campaigns are on the way, while they hopefully don’t take place in the same map. If you can upgrade your way into an enjoyable experience, it may be worth replaying the campaign and experimenting with different loadouts. But this comes at the cost of a taxing grind which is much longer than all the levels combined. Second Extinction‘s Early Access label doesn’t give it a reason to leave out a team deathmatch, custom levels or a wave-based survival mode. For a multiplayer-based shooter that looked to Turok and Jurassic Park for inspiration, Second Extinction fails to raise any bars and disappoints by a strangely uneven experience overall. 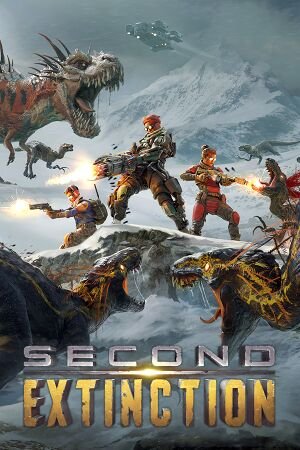