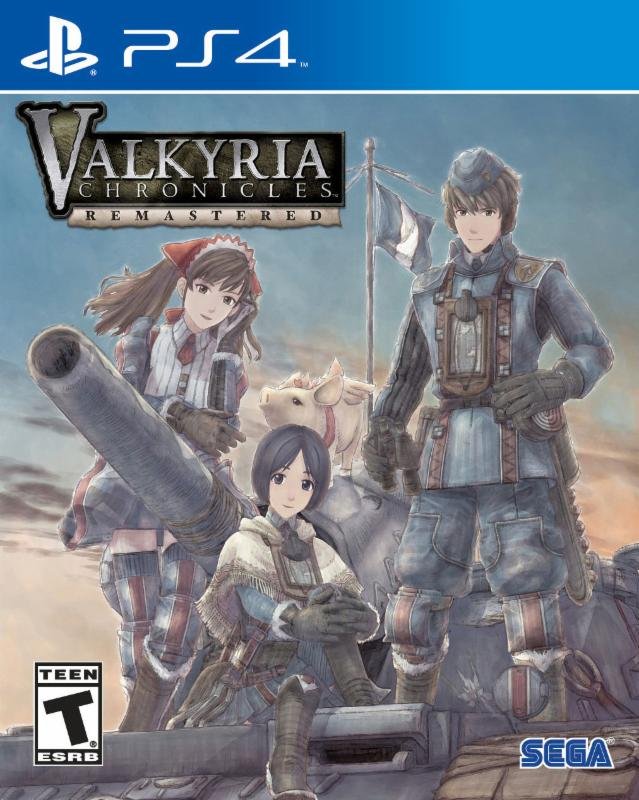 Sega’s been making a bit of a push back into mainstream relevance as of late. The West is getting new releases in the Yakuza franchise, the Hatsune Miku games have been a small-scale hit worldwide, and, of course, Sonic’s received a brand overhaul in the form of an aggressively humorous social media presence. Aside from that, though, it seems like the company is interested in bringing their cult classic strategy franchise, Valkyria Chronicles, back into the limelight. On top of a stellar PC port and an upcoming series reboot, we’re also getting a new version of the first entry on the PlayStation 4, in the form of Valkyria Chronicles Remastered.

Having played the original release a few years back, the first thing that struck me when revisiting the title is how well everything has held up on a narrative level. The plot is still one of the only war stories in gaming that feels authentic in its depiction of wartime atrocities. While, yes, most everything is presented through a heavily stylized anime lens, there’s no denying that some of the imagery and thematic elements presented here are fairly heavy. The game doesn’t shy away from allusions to the Holocaust, nor does it flinch at showing civilian slaughter at the hands of the opposing military regime. While it may lack the visceral violence of Spec Ops: The Line or the oppressively bleak atmosphere of This War Of Mine, Valkyria Chronicles still manages to paint a vivid depiction of war that doesn’t feel too sugar-coated in its approach.

Adding a more human element to the overarching war is the dynamic relationship system. In a fashion not totally dissimilar to the Fire Emblem franchise, players spend time outside of battle simply getting to know other units… and playing god to their interactions with each other. People who like micromanaging will find a lot to love here, as every unit has a set of unique characteristics known as Potentials. These determine their compatibility with other characters in certain situations. For example, it’s a safe bet that a unit who “fancies men” will probably fare well next to a male unit, or that a “Lone Wolf” won’t work and play well with others. Some of these potentials overlap, some are character-exclusive, and some are totally hidden and brought about through certain circumstances. To date, it’s my favourite perk/characteristic system in a strategy game, simply because of the staggering amount of depth on display.

On the same token, Valkyria Chronicles features some of the absolute best strategy gameplay on the market. It’s remained pretty much entirely unchanged for this re-release, and there’s a good reason for that: they pretty much nailed it the first go-round. Players start each turn viewing their units from a top-down map, giving them a lay of the land. From there, they dive down into the trenches, freely guiding individual units from a third-person perspective. Units have a meter that lets players know how far they can move and how much they can do. Placing units behind the right cover, knowing when to hang back in standby, leaving enough juice for them to counterattack… these are just three of the many elements players have to take into consideration when making their move. That’s not to mention placing characters next to each other so their relationships improve, or making sure characters are always near other units so they don’t permanently die (a feature that, thankfully, is not optional.) There’s a lot to unpack and dive into with this game. It’s a deep experience, and one that rewards patience and punishes hasty, thoughtless decisions.

A somewhat unique facet of the whole thing is the ability to visit the game’s equivalent of XZibit for a session of “Pimp My Tank.” Yes, in the midst of all the other layers of customization, there’s even a tank building function. Initially, players are pretty limited in their choices, but eventually, they’ll be able to do all sorts of fun things with it. While, perhaps, it never reaches the level of customization one might want it to, the fact that you get charged with outfitting and maintaining a tank is a pretty cool feature, all told.

All of the gameplay holds up remarkably well, as does the riveting, emotional narrative, but what of the production values? While the soundtrack is still brilliant, and the improved framerate is a boon, it is ironically the “remastered” part of the game that feels the most undercooked. Don’t get me wrong, this is probably the prettiest version of Valkyria Chronicles, and certainly the better of the two console versions. The colour pencil aesthetic is more clearly defined than before, and character models look crisp and lively. But a higher resolution highlights the fact that some of the textures in this game are sort of ugly to look at up close, and those textures have gone unchanged from the initial release. And while, yes, you’ll be more likely to focus on a battle and the characters and the vehicles than ground and building textures, it’s still disappointing that they weren’t spruced up a bit for this release.

I find it sort of hard to hold the lack of a total graphical overhaul against this game, however. As a whole, and especially as a release for half the price of a regular game, Valkyria Chronicles Remastered is an absolute steal. It has dozens upon dozens of hours of content, loads of replay value, and a ridiculous amount of variety in how you can play it. That’s to say nothing of the mature, nuanced, and heart-wrenching narrative, the unique aesthetic, or the sweeping, beautiful score. A near-perfect title, Valkyria Chronicles Remastered is an absolute must-own for all lovers of strategy games, and a perfect entry point for those unfamiliar with the genre.

A lack of a total visual overall barely detracts from the fact that Valkyria Chronicles Remastered is a total bargain, and the definitive version of the best in strategy
REVIEW SCORE
9.5
File Under: Sega