Sly Is HD AND New This Time

Not too long ago, Sanzaru Games treated the gaming world to a pleasant surprise with the HD collection of the past Sly Cooper games. Once another mainstay of the PS2 era, this crime caper based, open world game was full of charm and fun, something that’s been in short supply in the current generation. It turns out that HD port was just a lead up to Sanzaru taking over the reins of the franchise as the original developer, Sucker Punch, had their hands full with their new superhero franchise Infamous. A new developer taking on a cherished franchise from the past rightfully garners a lot of skepticism. Fortunately, this is one of those times when that skepticism is wrong.

The Gang’s All Here

Sly Cooper: Thieves In Time is a direct continuation of the existing series. Sly himself is “retired” having faked amnesia at the conclusion of the last game in order to finally get into a relationship with Interpol Inspector Carmelita Fox. Unfortunately his itch for heists rises again, and the perfect excuse to jump back into the action arises when the pages of the “Thievius Racoonus,”—the legacy of his thief family-line, with all their trade secrets—starts losing pages thanks to some time traveling hijinks. Sly and the gang reunite in order to travel back in time to stop whoever it is that’s trying to destroy the Cooper line through time paradoxes, and the game gets underway. Storywise, Sanzaru have mostly acquitted themselves. The plot of Thieves in Time is still just as fun and ludicrous as past games, although the Sanzaru writers are now officially in the running with Ni no Kuni’s localizers for the 2013 Most Shameless Use Of Puns award. The dialog isn’t always as snappy as past games, but most of the time, it rings true and can still elicit a laugh or a chuckle.

Visually, Thieves in Time may play tricks on the eyes thanks to the unreliable lens of nostalgia. The Sly Cooper games have always used a simpler, cel shaded graphic style and for people that haven’t looked at the games for a while, it’s easy to say “This looks pretty much like the old games on the PS2.” It doesn’t. The level of detail and polygon counts of the characters and environments all benefit from the PS3’s increased power. All the characters have gotten tweaked for HD with little accents like Ratchet’s fur, or the seams in Murray’s mask and gloves. It is bright and colorful and really shows off just how good cel shading can look with today’s consoles. On the other hand, it’s also not entirely stable in the performance department. There are moments of slight lagging in the framerate, and they happen with some regularity. There’s also significant amount of loading whenever starting up new missions or entering and exiting the starting hub of any level. None of this is game breaking by any stretch, but it does take some of the shine off the presentation. 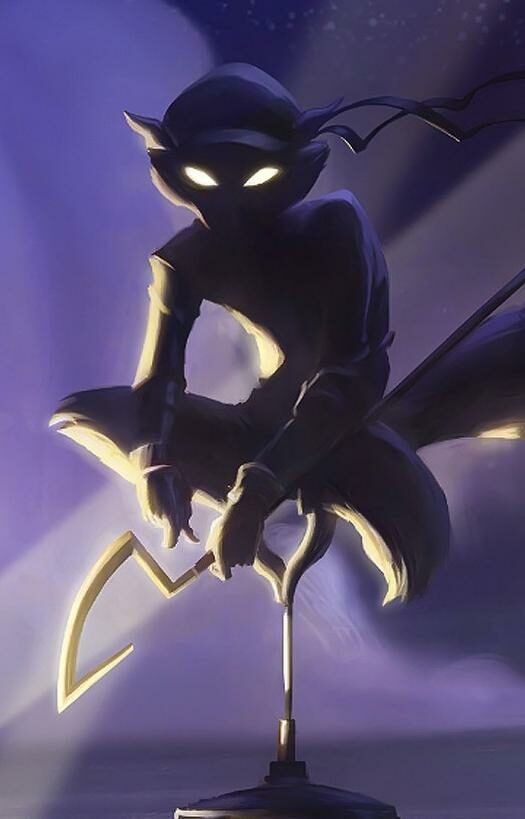 The sound, on the other hand, is good all the way through. The most important element was the voice actors, and Sanzaru managed to get the original trio to return for the voices of Sly, Murray and Bentley. Their performances are just as warm and silly as players remember and add a lot of laughs and entertainment to the experience. The biggest thumbs up though, has to go to the music. Peter McConnell, who also scored the second and third games deserves a lot of credit for the uniqueness and panache of his score for Thieves in Time. It’s still consistent with what’s come before, working off a base inspired by upbeat, big band jazz characteristic of the early 60s—think The Incredible with its emphasis on brass for the less musically inclined—but the time travel motif allows McConnell to work in a lot of other styles from various periods and cultures and weave that into the jazz. It sounds absolutely fantastic and is one of the most distinct soundtracks of the year, using an orchestra in way that most games don’t. The audio effects on the other hand, are pure old school. Sanzaru didn’t mess with the original effects, so all the familiar cues for sneaking, picking up health or the ever present hum of the binocucom are all exactly the way players remember. What is noticeably improved for players with a surround setup is the new directionality used by the game. The characteristic “tink-tink” sound that indicates a clue bottle is nearby takes advantage of multi-speakers to really give players a better sense of sound origin when panning the camera around.

Sly Cooper: Thieves in Time is a safe game. There hasn’t been a new game in the franchise for eight years, and it seems like Sanzaru didn’t want to rock the boat with this newest iteration. All the lessons learned in the last few games have taken root here, the emphasis on stealth, the progression of a caper from scouting the location and formulating a plan to the multi-part execution that requires all team members to do their part. Fans of the series will feel right at home with the controls which still operate exactly the way they did in past games. There isn’t anything particularly revolutionary about the game and it doesn’t advance the franchise by leaps and bounds with innovation. Instead, it focuses on what the series does best—a sense of adventure, exploration, crime capers and laughs—and gussies it all up with new HD graphics and sound.

For those unfamiliar with the Sly Cooper formula, the structure of the game is always focused on heists and/or capers. Levels consist of a small but packed open world, and a central goal that usually involves stealing something from a criminal. Different characters will have different duties in pursuit of this goal, such as Sly’s initial scouting missions to get photos and recon information for Bentley, or Murray’s wading into the middle of a huge brawl to defeat the hordes of hired muscle, or Bentley hacking a system so as to disable the more dangerous security measures. Often these missions are presented in the “hideout” all at once, so players can tackle mission objectives in any order they like before completing the final heist that results in a boss fight. In addition to all the missions, there’s a ton of collectibles scattered around, the gathering of which can yield rewards which may be purely cosmetic, or enhancements to gameplay such as damage reduction or adding treasure to the radar and map screens. The structure and core mechanics of Sly Cooper had been slowly iterated upon by the time the series got to Sly 3: Honor Among Thieves and Sanzaru decided not to mess with the established formula, sticking true to the pacing and fun the series had garnered a reputation for.

That’s not to say that Thieves in Time is completely bereft of new ideas. Disguises, which had played a part in earlier games, now become a new mechanic for traversing levels. As Sly travels to new time periods and assists his various Cooper ancestors, he acquires costumes that have unique abilities, such as being fire proof, or slowing time. These abilities come into play during story missions, and are also used to acquire the more secluded, out-of-the-way treasures scattered around each level. As with Honor Among Thieves there’s also an expanded cast of characters for players to use besides just the usual trio, including each of Sly’s ancestors, switching up the gameplay with new abilities.

However, the most surprising thing about Sly Cooper: Thieves in Time might be the sheer value of the purchase. The game will take over 10 hours for the average player, considerably more for people who are treasure hunting or pursuing a platinum trophy. That’s pretty decent for a $60 game, but much more impressive for a $40 game, which is what it’s at as it debuts on retail. To further add to the value, a brand new purchase of the game automatically includes a free, downloadable version for the Vita, meaning it’s a buy-one-get-one free bonus for owners of the Vita, enabled with the “cross-play” function. That means players can save their progress on the PS3, then download that same save to their Vita version and continue on exactly where they left off while commuting, then upload that progress back on the PS3 later in the day. There’s also a new, Vita specific mode called “AR Treasure.” It’s a bit of a cheat, in some ways, as it’s basically a “treasure radar” that links the Vita to the PS3 and whatever Sly is looking at on screen will be mirrored on the Vita—similar to a secondary HUD a la Wii U—that shows the location of every treasure in the field of view. For Vita owners, it’s a neat, gimmicky bonus that allows them to forego FAQs and Walkthroughs if they’re too lazy to hunt the treasure up without assistance.

To sum up, Sly Cooper: Thieves in Time is a successful, albeit safe, sequel from its newest developer, Sanzaru Games. Some technical issues mar the experience, but for fans of the series that just want more of the same, they’ll get it in spades with this latest sequel. It’s charming, fun, and has enough explanations of the backstories that even people new to the franchise can jump in, and at $40 for a cross compatible version, it’s hard to argue the value here. 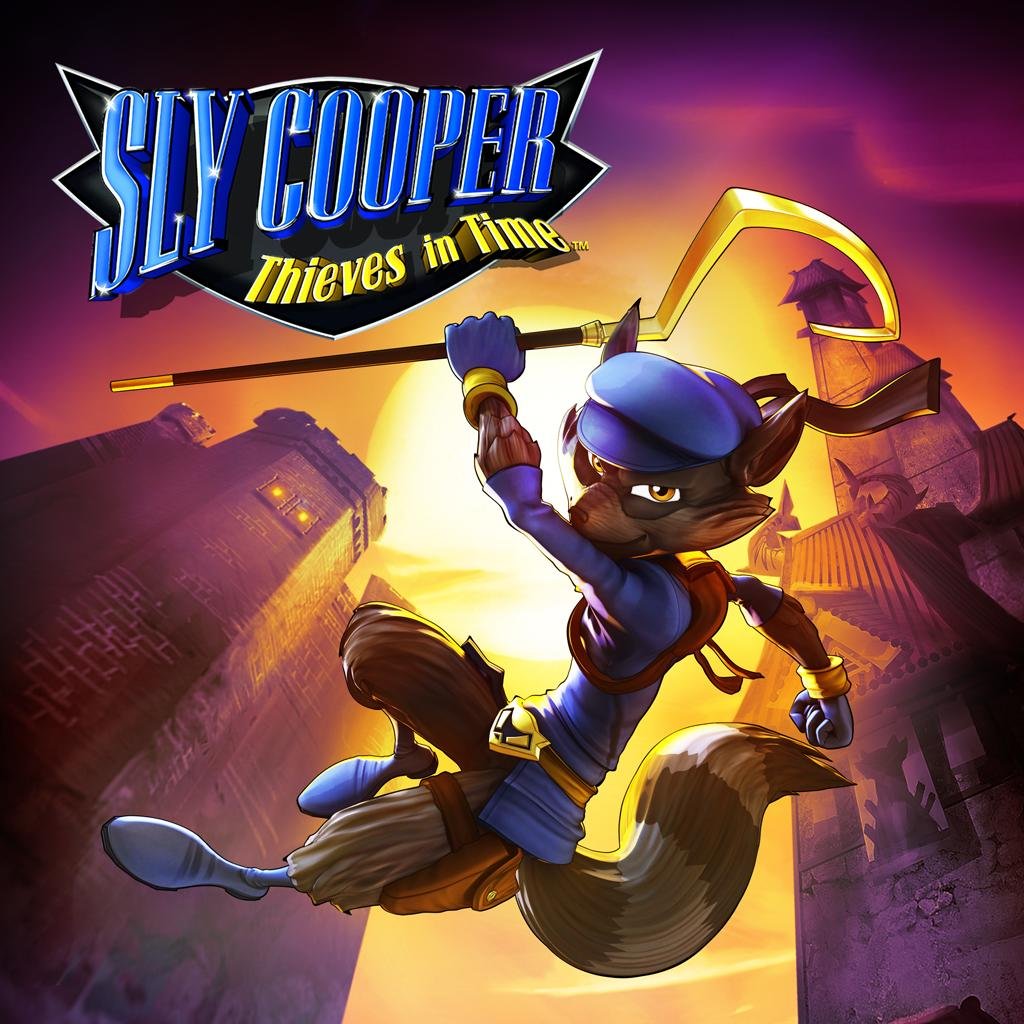 Final Thoughts
Sly Cooper: Thieves In Time is a direct continuation of the existing series. Sly himself is “retired” having faked amnesia at the conclusion of the last game in order to finally get into a relationship with Interpol Inspector Carmelita Fox.
File Under: Action, Platformer, PlayStation
×