The second I began playing Solar Shifter EX (a console port of a 2015 steam release) I was immediately reminded of my childhood and the multiple quarters I lost to other vertically scrolling shoot ’em ups like 1942. As with 1942, and all the games in this sub-genre, Solar Shifter EX’s gameplay largely consists of finding the safest location while holding down the firing button. To its credit, Solar Shifter EX does experiment with the mechanics commonly found in a vertically scrolling shoot ’em up, but unfortunately not all of those experiments are a success.

The biggest change to the common gameplay of this sub-genre is the shifting (teleporting) mechanic in Solar Shifter EX that gives both the player controlled ship and the overall game its name. With the right thumb stick you can instantly teleport your ship in one of the four major directions in order to avoid incoming fire. Luckily the controls for this mechanic are highly responsive, because you are going to use them often. The game constantly fills previously safe areas with bullets that will tear you apart, so shifting across the map becomes an important part of getting through levels. As the game’s primary mechanic I should have more to say about this subject, but the book on shifting is pretty much open and close. You use it to avoid the enemy fire that segments the screen and it works perfectly when you manipulate the right thumb stick. 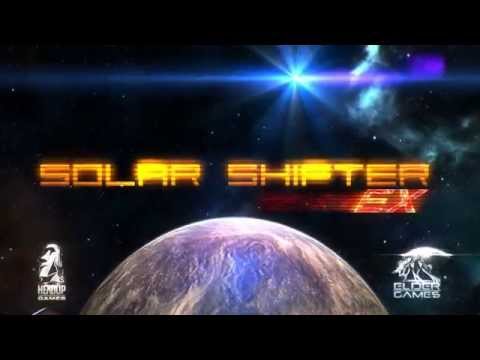 My only issue with shifting is actually a fault of the game’s text bubbles: everything is explained to you using small text bubbles at the top of the screen, and saying they’re really hard to read is the understatement of the year. During the game’s tutorial levels it was explained to me that I could shift around the level using the left-stick, which controls the ships flight movements, and the X button. It might have mentioned that I could also use the right-stick to shift, but the text bubble disappeared before I could process what it was trying to tell me. In actuality I only learned of the right-stick’s capabilities by accident. If you’re wondering what the issue is, let me explain that the right-stick shifts you to the exact location you want with extreme precision and accuracy. On the other hand, the combination of the left-stick and the X button is so inaccurate that it might accidently shift you to a completely different dimension Jerry O’Connell style. Trust me when I say that this review would have been very different if I didn’t discover the right-stick’s capabilities.

Other game-play experiments include a camera that moves around the screen to give the game a more cinematic look. This doesn’t affect the game-play at all because you are usually vertically scrolling when there are enemy aircraft around. There are also many unique game-play moments that I’ve never experienced in other vertically scrolling shoot’em ups. Without spoiling the paper thin story arc you will find yourself switching perspectives, performing Star Wars style trench runs, and a few other things you should experience yourself rathan than reading about them.

Solar Shifter EX even swaps out the common upgrade pick up system and replaces it with a credit-based system. Weapon upgrades usually disappear at the start of each level when you play a vertically scrolling shoot’em up, but in Solar Shifter EX you buy permanent upgrades. This works by having the player collect a certain number of credits for each enemy ship they destroy and spending them at the hangars found at the end of each level. It’s a nice idea but one that becomes a little pointless after you realize you can’t customize your ship. Every time you upgrade it gives you a specific weapon for a certain number of credits. If you destroy enough enemy ships, and thus collect enough credits, you don’t even have to choose which weapon system to upgrade. In the end it doesn’t affect gameplay that much so it kind of becomes a non-factor.

The majority of my issues with Solar Shifter EX can be traced back to the number of enemies on screen. Many of these issues are small, like how it can be hard to distinguish between the people you are shooting at and the friendly NPCs that provide a sense of scale and population density. On top of that, many of the NPCs (both good and bad) are scrolling down the screen at altitudes you cannot reach, so you can find yourself out of position with the feeling that you’ve somehow been tricked. Luckily most of these issues go away after you clear the first planet.

A few times I also stopped firing and just flew from safe point to safe point to see what would happen. The result was always a framerate that dropped to the speed of a vacation slide show. If you fire like you are supposed to this shouldn’t be an issue, but if you run away to survive it will always take a while for the framerate to get back on track.

That said, the game’s biggest issue is the respawn times between deaths. Instead of multiple lives you have infinite lives with a checkpoint system that saves a few times per level. Solar Shifter EX’s worst transgression is that the respawn times are between 8 and 10 seconds long, and that is often the length of time I am alive after respawning. Solar Shifter EX is a fun game that keeps you excited in the moment; however, it leaves you with too much down time to wonder why you are not playing one of the dozens of great indie titles that reload instantly. I spent roughly a quarter to a third of my time with Solar Shifter EX looking at the word “loading” and that realization is very depressing.

Normally, I would take a lesson from Writing 101 and use this closing paragraph to reiterate the points I have made so far; however, this time there is another factor involved. Reviews are actually subjective buying advice, and as the author of these subjective impressions I must point out that your enjoyment of vertically scrolling shoot ’em ups will be the defining factor in your happiness. If you have always enjoyed the genre, here is another one for you to consume; however, if your gameplay tastes are different then this might be one to pass on.

Final Thoughts
This vertical scrolling shoot’em up adds a number of modern refinements to the genre’s common conventions; that said your personal enjoyment of the game might depend more on your opinion of the genre as a whole.
REVIEW SCORE
8
File Under: PlayStation, space, Valve, Xbox