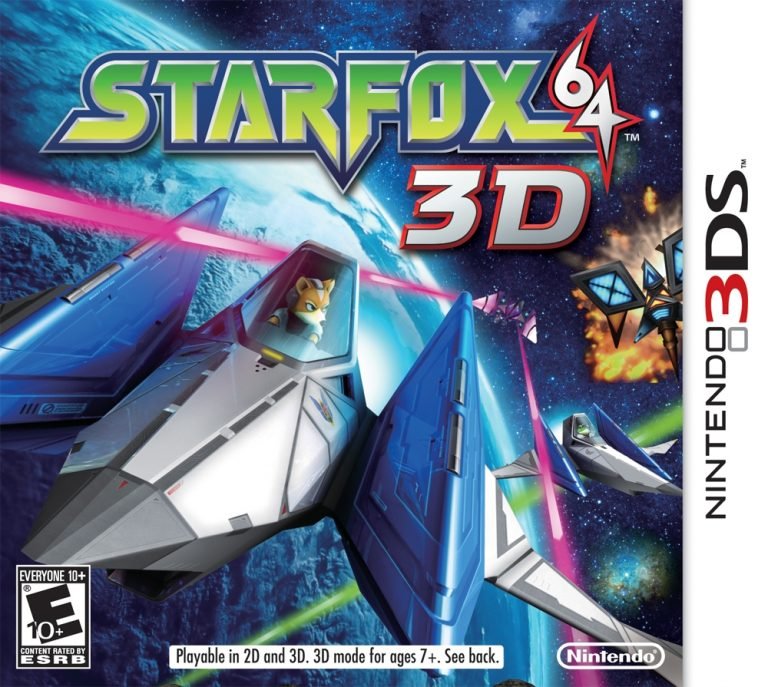 Much like they did with the successful Legend Of Zelda: Ocarina Of Time 3D, Nintendo has dipped back into the well to provide some glitzy new software for their 3DS. While it would have been nice if we’d gotten an all new space adventure for Nintendo’s lovable little Fox, there’s a good chance that people would have just complained that the new Star Fox game wasn’t as good as the classics anyways. Beyond the pretty incredible upgraded visuals, what’s probably most impressive about Star Fox 64 3D is just how well the 14 year old gameplay holds up. This thing is as addictive as ever and dripping with reply value. Now that it’s been updated with new graphics, glasses-free 3D, and you can pop it into your pocket, there’s never been a better time to revisit a childhood classic.

In case you’ve never played the original Star Fox 64 (and if that’s the case, you’ve never really lived), it’s a flight simulator/shooter that’s locked onto rails for the most part, except for the occasional 360-degree boss battle or dogfight. There’s not so much a story as a set up. You play Fox McCloud the leader of a group of cuddly animals who protect the universe from the Evil Andross in their sweet little spaceships. It’s basically a Disney version of Star Wars designed by Nintendo. The overworld has a total of 16 levels that can be accessed in a variety of ways depending on the paths you take from level to level. The new version adds a little more choice when deciding between levels, but part of the fun and compulsive replay value of game comes from trying to plot a different path every time out.  It won’t take long to make an initial run through the game, but hours can be easily gobbled up replaying your favorite moments.

If anything the circle pad on the 3DS plays smoother than the N64’s early analogue sticks. Flying around and shooting guys is a breeze, though later levels are challenging enough that you’ll need to put in a little practice. You can also turn on optional gyroscope controls that allow you to steer by moving around the system. It’s a fun option, but honestly the circle pad is so responsive on its own that I never had much use for the somewhat gimmicky motion controls. The levels are exactly as you remember them and just as entertaining, with some amazingly epic boss battles that you’ll find yourself wanting to replay the second they are over. The tank and submarine levels remain an entertaining novelty, though honestly piloting them essentially feels the same as the standard ship. It’s just a different environment.

The graphical makeover Nintendo whipped up for Star Fox 64 3D kind of has to be seen to be believed. All of the basic visual elements are there, but the blocky polygonal 64-bit graphic have been smoothed over with some of the best visuals yet to appear on the potent little handheld. The overall style is still cartoony, but water and environmental textures pop in a rather stunning way. It all feels enhanced by the 3D as well. The effect has no impact on frame rates like some 3DS titles and the added depth actually seems to make it a little easier to aim at enemies off in the distance. On a technical level alone, this game is a stunner and should win over a few gamers who have been on the fence about the system. Other updates are pretty minor. You can access any level individually through a score attack option now, which is nice if you only want to play a specific level rather than make a full run through the map. You can also save in the middle of a run now, which finally answers the prayers I sent out on sleepless nights of gaming in my youth trying to unlock that one last level. Since some of these changes make the game a little easier to play over all, you can also select an “N64” mode that reverts the rules back basics and increases the challenge.

The only real bummer about the whole game is the multiplayer option. It’s fun enough and plays smoothly with the computer or amongst friends locally, but frustratingly offers no online access. Considering that Capcom implemented some pretty solid online components to their 3DS editions of Street Fight IV and Resident Evil: Mercenaries there’s really no excuse for Nintendo to not include that here. Granted you can see your friends’ faces on the screen in local play and it only requires one cartridge, but still. It’s a wasted opportunity and really the only black mark on the entire game.

If you haven’t figured it out by now, Star Fox 64 3DS is a must buy for any 3DS owner. The gameplay hasn’t aged a day, in fact it’s hard to think of another recent game that holds up to so much replay. The graphical facelift is fantastic and the 3D actually adds to the gameplay. The only real bummer is the lack of online functionality and the fact that it’s a remake. I’d imagine that decision sped up the development cycle dramatically, but it’s a shame that Nintendo hasn’t put out any stellar original content for their new handheld yet. Don’t get me wrong, this is a classic game that plays better than anything else on the system, but it would have been nice if I was experiencing new Star Fox levels rather than simply reliving old ones. Still, this is an amazing flagship title for a system desperately in need of content. If you’ve been maxing out your credit card on eShop downloads to have something worth playing on your 3DS, the wait is mercifully over. Star Fox 64 3D is everything Nintendo promised it would be. Now how about cranking out a few more games for us boys? I’m hooked on this handheld like crack and I need another fix.

The gameplay hasn’t aged a day, in fact it’s hard to think of another recent game that holds up to so much replay.
REVIEW SCORE
9
File Under: Nintendo 3DS