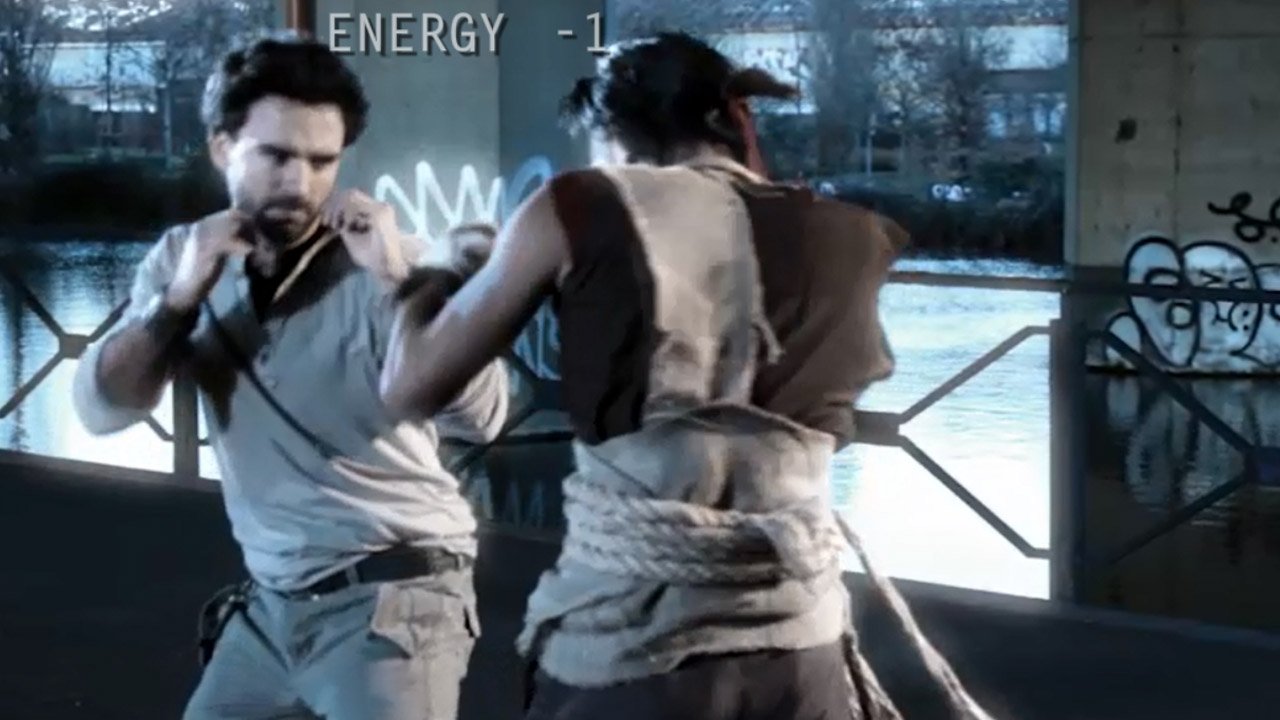 Full-Motion Video (FMV) was once the hot new tech in 90s game development. In an era where most game characters were pixelated or roughly rendered, FMV gave developers the chance to put clips of live action footage into a game, giving it the illusion of heightened virtual reality.

It was a novel idea, but not necessarily one that ended well. Tech limits meant that the video clips themselves weren’t of the best quality, and many games have gone down in history as awkward messes. We look back at it with ironic fondness today, and even enjoy modern games who have implemented FMV in interesting ways.

Players control a bland action hero and fight several different opponents ranging from kickboxers to stick-wielding Nazis.  There’s no trace of story in Stay Dead Evolution, which is one of its biggest problems. Since no context  or explanations are given, it’s awkward in its lack of continuity and cohesion.

This is only made worse by the background environments. Backgrounds have always been an important element in fighting games, often featuring unique settings and designs that sometimes even include interactive pieces. In Stay Dead Evolution, they’re more boring than the milquetoast grizzled protagonist, and make less sense than the silly tertiary characters. While playing, I fought a wannabe karate master in a bland, empty room, a Nazi officer in a schoolyard, and practiced judo throws in the middle of a junkyard. None of them make sense, and no context is ever offered.

Fighting games have long been ones built on a player’s skill. Timing must be sharp, combos must be memorized, and some will even take to studying finer details to succeed. Not just anyone can pick up a fighting game and easily conquer it; it takes time, dedication, and a lot of patience.

Stay Dead Evolution is the direct antithesis to this. Rather than using combos or studying my opponent’s moves, I merely watched a small red square fly across the screen toward a larger, differently colored square and make sure I timed my button hits correctly to line up the two. If I was successful, I was treated to a repeated selection of cut scenes depicting the attacks. If unsuccessful, I watched as my fighter poorly faked being hit by slightly-delayed responses and ridiculous overreactions. It’s nothing but an entire game built out of tedious quick-time events whose payoffs don’t even feel all that interesting, and it does a poor enough job of communicating to you how to win that you rarely feel like you have a solid grip on the action.
It’s not at all a good game. It’s a janky, lackluster mess arriving twenty years too late. It’s an interesting and novel enough pairing between FMV and fighting games that might one day pave the way for another to come in and make the most of its elements, but on its own, Stay Dead Evolution is nothing more than an ironically amusing concept failing to be of value on almost every level.

Stay Dead Evolution is nothing more than an ironically amusing concept failing to be of value on almost every level.