Fortune Favors the Board 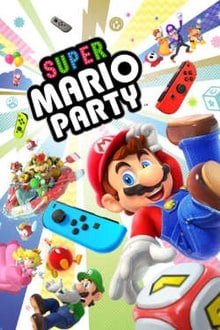 I vividly remember when the first Mario Party was released on the Nintendo 64. I, a twelve-year-old dingus who would one day grow into a thirty-something dingus, fell for an idea I must’ve seen pitched in an issue of Nintendo Power: “Why not throw your own shindig centred around Mario Party,” it read, not-so-subtly pushing sales of Nintendo’s latest multiplayer concept. Nevertheless, it worked: I baked mushroom-shaped sugar cookies, I got colour-coded cups for my preteen guests, I put up streamers…the whole nine. I wouldn’t come to enjoy physical board games until much later in life, but for more than a decade, Mario Party never failed to show me a good time—dubiously fortunate CPU opponents and all.

One would imagine that after ten mainline entries, the franchise would have nowhere left to iterate, but Mario Party is all about experimentation. Wisely ditching the tedious and strategy-devoid “car” mechanic from Mario Party 9 and Mario Party 10 (which sent players across the game board in a single group), Super Mario Party makes a conservative debut on the Nintendo Switch that highlights what the series does best.

I was relieved to find that the core game mode in Super Mario Party goes back to basics. “Mario Party” is just that: a four-player foray into one of four different Mario-themed game boards. With the ultimate goal of earning the most stars by the end of the session, players take turns rolling dice to move their characters forward before competing in a minigame. New to Super Mario Party are unique dice blocks for each character. Wario, for example, has access to a six-sided die with two sides that make him lose two coins, but the other four sides all move him six spaces ahead. It’s a genius addition to the game that adds strategy to character selection (which was previously just cosmetic) as well as on a turn-by-turn basis. It also incentivizes unlocking the game’s four hidden characters, since each brings their own special die to the party.

Super Mario Party also adds “allies” to the mix. By using an item or landing on the appropriate space, players can enlist up to three allies to work alongside their character. These allies grant access to their unique dice blocks as well extra dice rolls on top of the player character’s roll. They even participate in minigames as computer-controlled teammates, but their AI leaves a lot to be desired, making them little more than warm bodies who can sometimes impede opponents to hilarious effect.

Although Super Mario Party could stand to have more than four boards, each is greatly remixed for the new “Partner Party” mode. Here, players form teams of two and freely move across a grid-based board in pursuit of stars and other objectives. There is merit in both moving together and splitting up, depending on the circumstances; one board, a gold mine, saw me heading to the far edge of the map for a pickaxe so my teammate could use it to unearth a star on the other side. However, it’s also possible to steal coins from opponents by landing on their space, and if both members of a team land on a star space, they reap twice the reward. I liked Partner Party even more than the standard mode due to its emphasis on strategy and teamwork.

In what could almost be viewed as a concession to those who might miss the car mechanic, Super Mario Party also introduces “River Survival” mode. Here, players use their controllers to paddle a raft down a raging river. Verbal coordination is important, as players need to decide which way to direct the raft at a number of branches along the way. As one might infer, the main objective here is to reach the end of the river before a ticking countdown reaches zero. Performing well in the minigames scattered throughout each course adds time to the clock, but the difficulty curve is so gentle that my team always ended up with literal minutes of surplus on our countdown by the time we completed the course. River Survival is billed as one of the main modes in Super Mario Party, but I’m not really sure why in light of how decidedly un-cerebral it is. To be fair, I don’t expect any Mario Party game to push my skills to the limit—my patience, on the other hand…

A handful of other distractions round out the Super Mario Party experience, but none are especially robust. “Challenge Road” is a gauntlet of eighty minigames with special objectives, like “earn X points in Y seconds.” I can’t argue that this mode adds longevity to Super Mario Party‘s minigames, but it’s something I tried once and never went back to. Mario Party‘s minigames don’t hold up as well in a vacuum. “Sound Stage” is an adorable sequence of rhythm games that’s over in the blink of an eye. There’s also “Toad’s Rec Room,” a small selection of slightly-less-mini games that utilize the Switch in novel configurations. My favourite of these was a cooperative block-pushing puzzle game that had my group totally riled up in the best way—where else is the spirit of Mario Party better realized than in the frenzied shouts and laughs of four friends on a couch? I was, unfortunately, unable to test the “Online Mariothon,” Super Mario Party‘s sole online offering, due to its servers not being online prior to launch. Still, given that it’s yet another mode comprised solely of minigames, I’m not confident it adds much to the package one way or another.

All I really wanted out of a new Mario Party was for it to competently execute its core mechanics, and Super Mario Party achieves that goal. There’s no weird, gimmicky movement that eschews strategy, and its minigames mostly make sensible use of the Joy-Con’s inputs and motion capabilities. Luck is always going to play a part in determining who wins a game of Mario Party, but I can’t be mad about that. Even if all of Super Mario Party‘s modes aren’t total knockouts, and even if it feels a little light on core content, it’s still a good way to kick back with three buddies on a Friday night.

P.S. Boo is a vile cheater and I shun him forever.

By ditching previous entries' clumsy attempts at innovation, Super Mario Party reminds us how fun it can be to crowd around a TV and roll dice with the Mushroom Kingdom crew.
REVIEW SCORE
7.5
File Under: Nintendo, Nintendo Switch