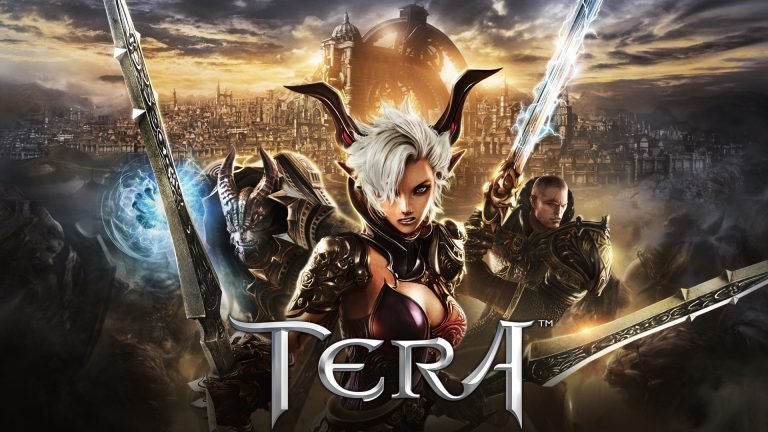 It’s practically a sin to compare an MMO to World of Warcraft. For one thing, it perpetuates the stereotype that all of them are clones of WoW and can’t ever compare to it. That said, a lot of games now actually fit pretty nicely into the same style, using a lot of the same mechanics and conventions.

TERA, sadly, falls into it a bit too much. Which is why I mention this.

The Exiled Realms of Arborea, a Korean MMO just released here, relies on two things to set it apart from the common MMOs. One of these is the copious amounts of fan-service and pretty environments; the second is a dynamic combat system.

The plot isn’t worth even talking about. The world’s origin myth is that the two main continents are the sleeping bodies of Titans, shaken up when a new island rises from the sea between them, covered in ruins and a giant pillar-tree. Heroes go to investigate it; this serves as the opening area for both the tutorial and for the intro level. The rest of the story is in quest dialogue and in pointless cut scenes that really don’t add anything to the experience; the entire story seems like it was an afterthought. All of the characters start off on the same island, regardless of class or race, and do the same quests. Not much replayability, but the classes all have different combat styles, which makes it fun to employ different strategies.

The combat system is the game’s big selling point, and I have to admit, it’s fun. Rather than simply clicking and pressing attacks, you actually have targeting crosshairs and can aim your attacks. Some require charging the button, others passing the reticule over enemies to ‘target’ them. You can move in and out of enemy attack range. Much I want to say it, this isn’t unprecedented. WoW did a similar thing with siege weapons in Wrath, with localized attacks on tanks. The difference is scale – TERA applies it to the entire combat system. You only lock onto a target for certain powers; some require you charge the attack up to make it stronger, meaning you have to pick a time when the enemy isn’t attacking. Dodges and normal movement is quite important, particularly against the tougher enemies.

Enemies come in several varieties – individual foes, small groups, or large groups of small enemies. Sometimes the small hordes have a larger foe with them. It’s pretty much standard MMO; they mill about and fight when you arrive. The game’s quests invariably involve killing large droves of them and/or collecting pieces of them (often you don’t even need an inventory space, which makes it far easier). The heart and soul of the game, however, comes in the BAMs (Big-Ass Monsters – that is literally the official term). These giant beasts take multiple people to take down safely, and rely on using your move-set to avoid their punishing attacks. They’re the most mobile of monsters, and require moving about frequently to best avoid their attacks – raiders will enjoy this.

Other interesting combat mechanics include chains – moves done in a certain order do more damage. The prompts make it seem too easy, especially since they let you perform the chain just by pressing the spacebar, but when you’re fighting a large group, you’ll be thankful they’re there. There’s actual strategy to the combat; you move, you aim, and you keep enemies directed. It’s far more engaging than most MMO combat, relying on more activity and quick thinking, as well as awareness of what your enemy can do. If you’re well-versed in the enemy’s attack patterns, and your own skills, you can avoid every attack; you can even solo some BAMs depending on your class.

Graphically, the game is nice. The environments are pretty, particularly the starting area, and feature some amazing structures. However, I feel like the areas beyond the starter zone are somewhat lacking. Velika, the capital city, has huge empty lands surrounding it, with a few random buildings for appearance sake. The early areas, like Arcadia, are nice forests, but it feels like there could have been more impressive designs.

The costumes and character designs vary from excellent to ridiculous, leaning a bit more towards the latter. Some of the races, like elves and humans, look strange, their proportions unsettling – castanics, the cover race, look disturbing in the game, with all the females running like they’re posing for a Liefeld comic shoot. Elin terrify me on a level I cannot articulate, ranging from the over-cutesy manners to the unspeakably creepy skirt-lines. Baraka, Aman, and Popori are interesting designs, and are fun to watch and play. The outfits border on the idiotic, with female armour essentially ranging from ‘bikini’ to ‘cocktail dress made of leather’ to ‘metal bikini’. The ability to change colours and designs of outfits is unimpressive, with the colours looking spray-painted on. Coupled with a disappointing character customization, it feels like a letdown.

Crafting items, and enchanting gear, also features, but the system is expensive and not all that useful. You get better gear from killing BAMs and questing, and you save your money. It’s a bit tedious to harvest all the materials (you have the ability to harvest every resource, not just a few like in most games), and to build a weapon that you won’t replace in an area.

What disappoints me the most is the lack of dedicated PvP. You can duel people, or fight them opening on PvP servers, but there’s no real battlegrounds or PvP areas I can find. The system is so perfect for actual player fights that it’s sad to see it so underused. The universe doesn’t have any reason to fight other players, since everyone is part of one big federation.

This game is largely a one-trick pony, which makes me sad. TERA has broken ground with its combat system, but that it just relies on standards and even lackluster features and completely ignores story is shameful. A more solid game mixed in with its system would have done wonders for it, and might have broken it out from games like Star Wars: The Old Republic, which will keep getting compared to World of Warcraft.

Hopefully, the dynamic combat will be picked up by future games, as it’s the strongest unique factor, and something that the MMO world desperately needs.

TERA has broken ground with its combat system, but that it just relies on standards and even lackluster features and completely ignores story is shameful.
REVIEW SCORE
7
File Under: Action, Multiplayer, PC, RPG