The Adventures of Tintin: The Secret of the Unicorn (PS3) Review 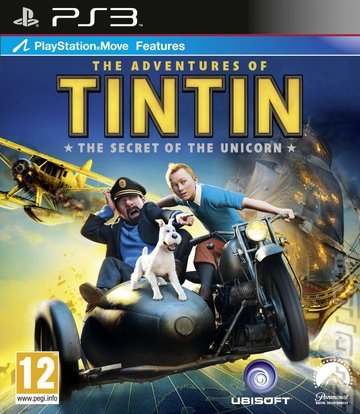 Tintin may not be the most widely-recognized comic book character to North American readers, but in Europe, the intrepid reporter has been a fixture of comic culture since 1929. Now, with the Steven Spielberg/Peter Jackson CG animated feature finally crossing the Atlantic, a new generation of kids have the opportunity to discover the sense of timeless adventure that Herge brought to Tintin, and for gamers, that means a surprisingly respectable film-to-game adaptation that doesn’t embarrass itself or its storied franchise.

The game, like the movie, is based on three separate Tintin adventures—contemporary comic collectors would call them graphic novel compilations—published in 1941, 1943 and 1944 respectively. The basic story here chronicles how Tintin, in classic ‘Boy’s Own Adventure’ style, discovers a model ship containing clues to a long lost treasure. What follows is the kind of daring-do and last minute escape-based hijinks that Spielberg has made a career out of. We’re talking about an old fashioned yarn where no one dies, villains get their just desserts, and friendships are forged. In other words, this is classic adventure stuff.

Similarly classic is the art and game design Ubisoft Montpellier has taken for the game. The cross-platform nature of the title is readily apparent, with a simpler, but detailed look that is both consistent with the original art, and manageable for even portable systems to render. But this isn’t a quick n’ dirty hack job; it’s clear that Ubisoft Montpellier has fans of Tintin at the studio. Care is taken in both the characters and the painterly approach to the environments. Sound is given a similar boisterous, orchestral treatment with an old school adventurous feel to the melodies that embraces fun and discovery, rather than dark and gritty.

Where the game surprises most however, is in the actual play. For the most part, this is a side-scrolling puzzle/platformer in the style of classic French games like Another World and Flashback. Considering Tintin’s own Belgian roots, this makes the game a delightfully, unapologetically French work that manages to bring a solid—though occasionally poorly-paced— adventure to gamers this Christmas. Players move from one “room” to the next, sometimes fighting, sometimes negotiating obstacles, sometimes doing both as a process of solving puzzles. This is broken up by some more modern, third-person action like driving and flying sections, or even running away from homicidal drivers. While the modern portions do add a little variety to the proceedings, they tend to go on for too long and lack the sheer design strength of the core side-scrolling gameplay. The result is an occasionally uneven game with downtime that stretches on for too long, but when the game returns to its roots, players will be scooting through trap doors, hurling banana peels at foes, grasping ledges and briskly navigating from one well conceived level to the next. For better or for worse, Ubisoft decided to quit while they were ahead, and while there are no weak 2.5D levels to be found, the main campaign clocks in at 4 hours or so for veterans of the side-scrolling genre, though the game will provide considerably more challenge for a younger crowd.

However, on top of this is a fantastic, local co-op campaign that will add a few more hours and is, in some ways, even more smartly designed than the story mode, since it focuses entirely on the core side-scrolling component with the use of different characters with different abilities to really ratchet up the fiendishness of the level design. A challenge mode is also available for the driving, flying and sword fighting mini-games, and it’s here that half-hearted use of motion controls such as Playstation Move or the Wii-mote comes as an optional control scheme, but it doesn’t add much to the overall experience.

In the end, what we’ve got with The Adventures of Tintin is a respectful game treatment of a classic European comic property that is uneven in pacing, but excels at its core strength, traditional, side-scrolling puzzle/platform gameplay. It’s a little on the short side, but is accompanied by a well-conceived local co-op mode, and would make a great gift for just about any gamer with a taste for competent design and old fashioned adventure. This might not be a must-have, but at a reasonably priced $40, it’s definitely a nice-to-have for families and old school gamers.

In the end, what we’ve got with The Adventures of Tintin is a respectful game treatment of a classic European comic property that is uneven in pacing, but excels at its core strength, traditional, side-scrolling puzzle/platform gameplay.
REVIEW SCORE
8
File Under: Adventure, Nintendo, PlayStation