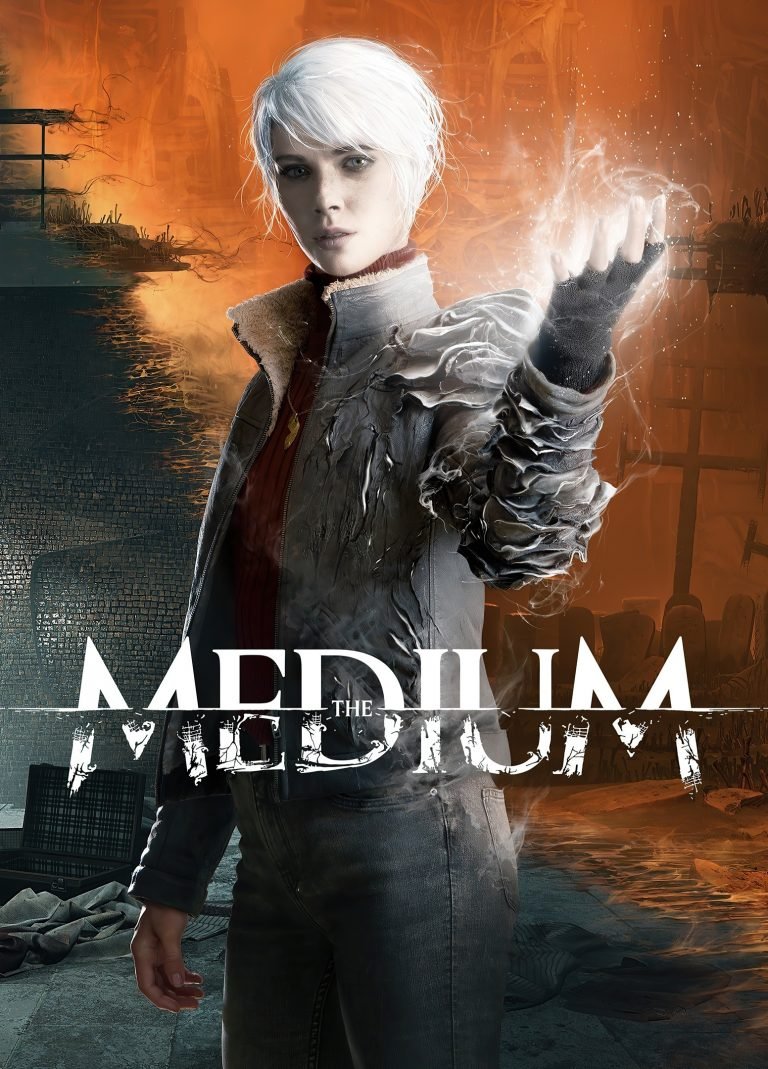 A few years ago, Polish developer Bloober Team hit the scene in a big way with Layers of Fear, their horror/painting simulator from 2016. To be perfectly honest, I never saw the appeal of that one. It always just felt like a lot of jumpscares and shocking images with a loosely defined theme and never really got into anything truly horrific. With this in mind, and after 2019’s poorly received Blair Witch, I don’t know why I went into The Medium with any inkling that I would enjoy it.

The game starts with the protagonist, Marianne preparing for the funeral of her deceased foster parent, which functions as a loose tutorial. Marianne stomps around looking for a tie clip and appropriate keys using her special ghostly vision to detect things that are not readily apparent, even though those things are not especially ghostly. This sequence culminates in a confrontation with the shade of her extremely confused father figure, in what should have been an emotional, sombre scene. The problem is that there are no emotional stakes here. Sure, Marianne is wailing, and this old man ghost is muttering about like he’s meant to remind me of the grim reality of senility, but none of these characters mean a thing to me yet so all their overacting just feels unearned and hollow.

The rest of the game is like this too. There is a distinct lack of subtly in the storytelling around every corner, so much so that there is literally a major character named, “Sadness.” This is a cheerful ghost of a child, and she tells you that her name is actually Sadness. You meet Sadness at the Niwa Resort, a big haunted place that Marianne is meant to meet some guy at; and, frankly, the rest of the story is fairly incomprehensible, poorly told, and seemingly negated by the time the whole ordeal is over and done with. There are some smaller stories here and there about people long dead that fare a little better, and some environmental story telling can be downright good, but these moments are fleeting overall.

The game plays like a 3D adventure game at the best of times, albeit one with sluggish and unresponsive controls. Move forward until you can no longer do so. Then you look for an item, or fuel for Marianne’s ghostly powers, then continue forward. Numerous times, you’ll be asked to circumvent completely glass doors in an abandoned building to progress, but I guess we can’t go wrecking up the place any further. The game has a habit of needlessly holding the player’s hand in some places and providing little to no guidance in others.

For example, when you’re approaching Niwa, there’s a set of ghostly footprints leading through the forest to the building. It goes on for several screens, but there’s no other paths to go on for most of them, so I don’t see that there was even any point to having them there in the first place. A bit later, there’s a puzzle where you find a little statue and with it is a picture of someone looking through a mirror with it and the statue looks different on the other side. For a moment, I thought that this was great and an excellent way to signal to the player what they could do with that statue, only to have Marianne explicitly say that I should take it to a mirror. It felt rather insulting to have the game doubt my intelligence so much that it had to ruin what could have been an interesting moment.

To make matters worse, the game is exceptionally buggy. I ran into weird graphical glitches all over the place, some hard crashes, and had to restart the game several times just to progress. There is a neat feature where the screen splits in half and the main character can interact with the real world and its ghostly counterpart. I came to dread these sequences because they absolutely destroyed the game’s framerate. The fact that the game has an option for an unlimited framerate cap feels impossibly optimistic.

The Medium is not my cup of tea. That, I think, has been well established, but it’s not without its good points. The visuals throughout can be pretty cool, and some of the aforementioned environmental storytelling can be interesting. I particularly enjoyed the designs of the ghosts, sadness included, and the locales looked very striking in their haunted, spooky forms. A few of the puzzles were even satisfying to solve when they weren’t the standard item hunt. I think that one of the reasons the art design of The Medium stands out to me is that it takes inspiration from the artist Zdzisław Beksiński. His work is haunting and beautiful, managing to capture surreal and decrepit images that invoke awe and dread masterfully. The Medium leans on his style heavily, and to great effect, even employing the same shades common in his work for their depiction of the afterlife.

There is one last thing that I would like to touch on here, and I really think it can explain a lot about why The Medium didn’t resonate with me. As Marianne goes about her business in exceptionally spooky spots, she is occasionally stopped by doors made of skin sewn onto an opening. Using a straight-razor she acquired early on, she can easily slice down the middle of the thing, and it disappears into the ether. Now, I couldn’t shake the feeling that that felt alarmingly familiar, and that’s because that’s a thing that happens a lot in Silent Hill: Homecoming; one of the bad Silent Hill games. Now, in that game it is used to help establish a theme of things being split (Silent Hill: Homecoming has a similar problem with a lack of subtlety), but here it is mostly used to fill time and maybe create some tension. .

Now, cribbing from a popular franchise in the genre isn’t the worst thing a game can do, though choosing a better entry to draw inspiration from might have been a good idea. However, The Medium’s most glaring issue is something that that franchise, even Homecoming, has always done and that is providing interesting decisions for the player. Now, those aren’t always big decisions and, more often than not, the most they’ll resolve into is a different ending, but if you compare that to The Medium, then the difference is massive.

In Silent Hill 2, a suicidal girl gives the protagonist a knife. You can’t use it in combat or for any of the puzzles in that game; it just sits in your inventory. However, each time you look at it counts up on an invisible tally that makes it more likely that at the end of the game the main character will take his own life. The game never tells you this, but it’s still a choice that you, the player, makes: the more often James looks at thatknife,e the more likely it is that he will do what its original owner wanted to do with it. The Medium, on the otherhand,d doesn’t offer the player any choices. It’s aspooky,y scary carnival ride that will always start and end in the same place no matter how you play it.

I want to like this game. On paper, it looks like a pretty good idea, and some designs are exactly the kinds of things I want to see in a horror game, but, as a whole, there are too many issues here. The bugs, the poorly told story, and the deeper narrative concerns really hold the game down and there’s not much here to hold up. Hopefully, some intense patches can iron out the technical issues, but other issues cannot really be improved on. I cannot recommend fans of the horror genre to pay money for The Medium.

The Medium is a poor game that is rife with bugs, bad ideas, and some nice things to look at.
REVIEW SCORE
4.5
File Under: Horror