The Sims has always been about a wish fulfilment of a more mundane sort, although the franchise has occasionally ventured beyond its comfortable suburban neighborhoods to more fantastic venues. This time The Sims 3 gets its inevitable expansion, timed to release before Halloween. It tackles the worlds of Stephenie Meyer, Jim Butcher and Laurell K. Hamilton and brings a vampy, wolfy, magical, fairy world into suburbia to worry about drinking blood while questing for that perfect couch.

Yes, You Can Have A Vampire Boyfriend

Supernatural follows the Sim convention of creating a new town (Moonlight Falls) for players to move to if they wish, and engage in the primary draw of the expansion. You can create a new character—or convert an existing character through quests—that is a creature of fantasy, choosing from a Vampire, Werewolf, Fairy, Witch, Genie or Ghost, each one with their own particular abilities and limitations. So for example, if you choose to create a vampire, then there will be some obvious boundaries, such as a weakness to sunlight—in this case, it doesn’t mean exploding or melting, though you will smoke and eventually pass out—and a lifetime goal of turning some of the people in town to your brood. If you choose the fairy, you’ll get magical wings fluttering behind your Sim, as well as the ability to work fairy magic and a goal to “bring out the inner beauty” in other Sims through the use of your magic. Other new changes are a new profession—in the form of fortune telling—and the ability for Sims to make elixirs that can do everything from provide some immunity to the sun to turning people into werewolves. As to be expected from an expansion that focuses on creatures that go bump in the night, there’s a concession to lunar activities as well. Full moons result in all manner of mayhem, with werewolves changing into their lycan forms, and the random spawning of zombies that “rampage” by wrecking gardens and biting passersby, although they’re considerate enough to not harass people sleeping in bed.

On top of all this is arc-welded the usual Sims goals of buying a house—or not—and having a career so you can make money and buy stuff. This is where the expansion’s problems start to come into play. The integration of the new character “classes” with the existing mechanics is hardly a smooth one. A spectacular example of this made itself known within minutes of my first playthrough as a new vampire. You’d think that someone who starts smoking and eventually passes out from exposure to sunlight would make it a priority to avoiding daylight. My new Vampire Sim had no sense of comfort or self-preservation, and when left to her own devices, happily went outside to chat with neighbors until she lost consciousness. This means a much higher than normal level of babysitting your Sims for players that want to avoid complications.

While this doesn’t actually break the game in a serious way, it’s baffling to think that with the limitations of blood drinking, fairy magic, or even “wolfing out” that are now available to the player, The Sims doesn’t acknowledge that this requires any major changes to the suburban lifestyle. Regardless of whether you’re a ghost or a genie, your Sim, left to his or her own devices, will still want to eat, sleep and get cranky when there’s no TV or music to relax with. It’s just now they’ve also got to turn the town into vampires, or play the Fairy Godmother to the nascent Cinderellas of the neighborhood. And on top of all that, you’ve still got to get some kind of job if you can’t stand that default stove that came with your budget house or want a nicer bed. The flipside of this is that for a vampire, ghost or werewolf, there’s not really the slaughter, tragedy and wide-scale destruction you’d expect from an unholy creature of the night being loosed upon an unsuspecting suburban neighborhood. Yes, you can drink the blood of other people and you can cast magic, but the usual Sims boundaries are in place, so this is a largely safe, cartoon world where people only die of old age or random accidents. And of course, kids are off limits.

This is not really a good expansion to recommend, because while it adds new things to the base game, none of them really advance the fun in the way something like The Sims 3: Showtime did, where it finally showed players what happens during the day when certain creative professions went to work. And then there’s the price; the original base game currently sells for $30 and is a LOT of game. This new expansion sells for $40, with content that needs some serious tweaking to feel balanced and in line with what’s come before. The Sims 3: Supernatural is really only for fans that have exhausted all the other content and want something new. For more casual fans of the series, this doesn’t do much and may in fact complicate things to an inconvenient degree.

This is not really a good expansion to recommend, because while it adds new things to the base game, none of them really advance the fun in the way something like The Sims 3: Showtime did. 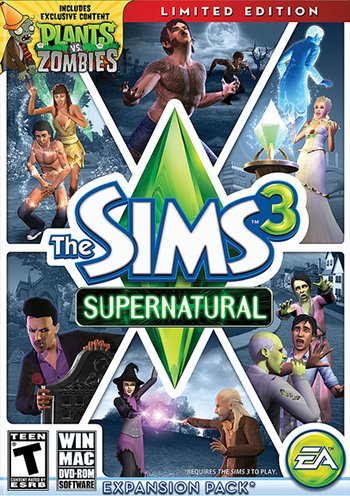