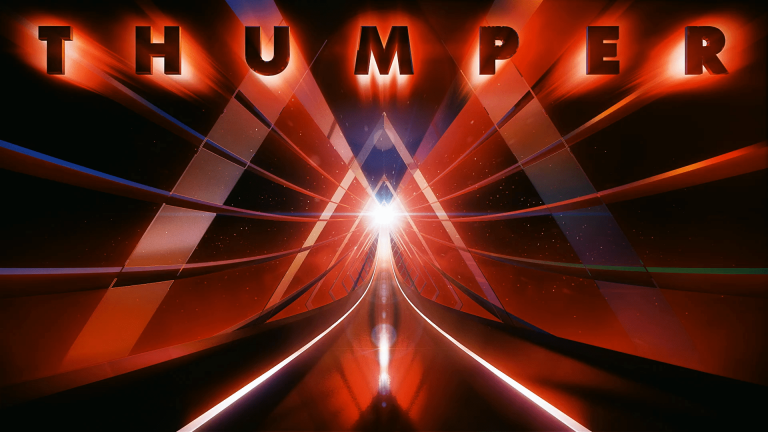 Rarely do rhythm games provide a challenge to someone like me who has played nearly everything the genre has to offer, yet somehow Thumper, a game that only requires you to press the X button and the directional controls, pushed me to my limit. That isn’t a bad thing, at least for me.

If you don’t like hard games then you’ll hate Thumper, as it is easily one of the most unapologetically difficult games I’ve played in years. There are no difficulty settings to speak of, which is a shame as they would make the game far more accessible.

You play as a metallic beetle cruising at breakneck speeds down a path that is sometimes adorned with centipede-like legs, which, when combined with the game’s industrial soundtrack, makes for a terrifying yet exhilarating experience. Pressing X and a directional button will have you either playing notes that pass underneath you, ramming through barriers, flying through the air (sometimes over spikes), or sliding around curves. You can survive your first collision with one of the game’s many obstacles  – spikes, barriers, or curves – but  the second will end your life and force you to restart at one of the frequent checkpoints, which you’ll be doing a lot unless you’re some kind of savant that can play Through the Fire and the Flames with your eyes closed in Guitar Hero. 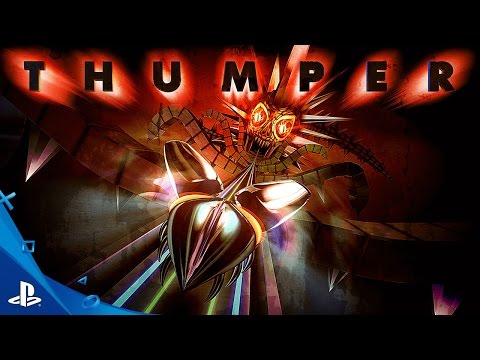 Running at a smooth 60 frames-per-second with shiny visuals that blur as you continue to move faster and faster, Thumper is easy on the eyes, though on the ears not so much, but that is part of its charm. The industrial music that you create by playing sounds a lot like Stomp and Nine Inch Nails broke into a factory and broke stuff, and it helps keep the mood of the game urgent and scary, unlike most music games that have you humming along happily.

While I absolutely loved my time with Thumper, it does have a few glaring issues. First off, most every song is made up of the same sounds, meaning every level sounds very similar. Levels almost all look the same, too, including the bosses you’ll come across that just act as parts of the levels that you have to perfect to pass. There is also no context for what you’re experiencing, no story to be found about a beetle escaping from a Tron-like Hell (which is what I imagined), at least not provided in the game anywhere: perhaps there is one in the digital manual, but who even reads those?

With a bit more variety this could have been a must-own game, but as it stands, while a lot of players will find it  worth trying for the experience,  only the most dedicated will want to master the speed and dexterity needed to reach the end credits. If you’re up for the challenge, Thumper is a great little rhythm game unlike anything else in the genre, plus it supports the PlayStation VR and is seemingly one of the better games for it. Now if you’ll excuse me, I need to go back to thumping.

Breakneck speeds, industrial music, and a shiny metallic beetle in a cybernetic reality come together to make one of the most original and difficult rhythm games in years.
REVIEW SCORE
8.5
File Under: rhythm