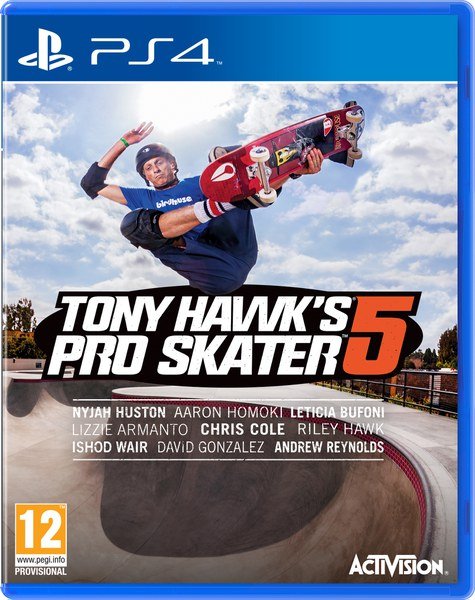 The first four Tony Hawk Pro Skater games are fun, addictive, and nostalgic skateboarding games. Pro Skater 5, however, feels like a tired mess. Instead of reinvigorating the series and the skateboarding genre in general, PS5 puts the final nail in the coffin.

Developer Robomodo actually approached the project in a correct way by going back to the basics. Long gone are the open-worlds and generic stories and characters. Pro Skater 5 puts sole emphasis on skating around levels and pulling off cool moves and combos. Unfortunately, a slew of issues constantly bog down the entire experience. The levels, of which there are only around 7-8, look and feel painfully generic. They lack the spirit and creativity of past Pro Skater games. Instead, they’re small, bland, and lack verticality. This is a major issue given the fact that you’ll be spending pretty much the entire time playing in these levels. It’s mind boggling that not enough effort was poured into expanding them to really make these levels fun.

But what are even more unacceptable are the awful physics and bugs. Collision disasters plague a game that’s about how the human body interacts with the world. At first I thought it was my fault that I was constantly falling down and crashing. Maybe I just suck? But far too often my character flew straight up in the air and fell on the ground for no apparent reason, and passed through objects instead of slamming or skating on them. The gameplay mechanics just feel cumbersome, and lack the fluidity that the previous Pro Skater games have. At times I did manage to get into my groove and pull off crazy combos while skating at a high distance, but those moments are few and far between. The sole new addition to your arsenal that Robomodo introduces is a slam move that sends your skater rocketing to the ground. The problem here is that it is mapped to the same button as grind, which creates a bunch of unneeded issues midway through skating. And there’s no way to remap the controls.

With the levels and gameplay being a huge disappointment, at least the content has to be good right? Right? Well, you’ll spending most of your time completing generic little missions within levels in order to unlock new levels, in which you’ll continue completing the same awful missions. They range from collecting items like ice cream cones within a certain time period, going through blue rings akin to those found in Superman 64, and accumulating a particular amount of combo points within a time period as well. They’re uninspired and just painfully boring, and you’re constantly pulled into loading screens whenever you finish a mission, which always last less than 3 minutes. This is the crux of the entire game, and it’s unacceptable.

However, the level builder is a small highlight, as it’s always fun to create your own skate parks, and it’s relatively easy to do so as well. And you can also customize your own character, and you’ve plenty to choose from ranging from professional skaters to video game characters and rapper Lil Wayne himself. You also level up your character, but the difference between playing as a vanilla skater to one that’s fully upgraded is minimal at best. There’s no sense of progression. Oh, and remember those awesome Pro Skater soundtracks filled with 90s hip hop and punk rock? Well, you’ll be hard-pressed to find any decent songs or bands in Pro Skater 5.

It’s a shame that yet another recent Tony Hawk game sucks, especially since those earlier titles are so fantastic. Sometimes it makes you wonder if maybe Pro Skater is a thing of the past that should be left alone.