You’ve Got the Touch 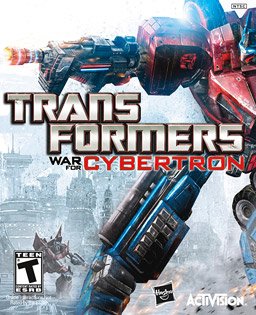 Transformers: War for Cybertron is one of those games with a legacy weighed down by decades of expectation and mediocre release It’s not the first franchise to have a history of transitioning badly to games, and it certainly won’t be the last. But Batman finally got Batman: Arkham Asylum which became not just the best Batman game to date, but the best comic game as, well as fine video game purely on its own merit Transformers: War for Cybertron attempts to do the same thing, and manages to succeed, though not to the same stratospheric degree.

You’ve Got the Power

Transformers: War for Cybertron may be played by the young, but really, it is intended for the young at heart. This is a love letter to the fans that takes place before the Autobots’ fateful exodus to Earth, revealing how some of the Transformers first met and how battle-hardened soldier, Optimus rose to the position of Optimus Prime. The premise is that series nemesis Megatron is trying to control their home world of Cybertron through the use of a volatile substance known as Dark Energon. It’s clear that there’s a lot of knowledge and love for the Transformers at High Moon, and the fan service is frequent and fun. It’s not strict G1 continuity from either the comics or the series, instead borrowing heavily from different source

When you start looking at presentation, a few bits of rust begin to eat away at the paint job, a sign of its aging technology. Transformers uses the Unreal engine and it shows, with the usual culprits the engine is noted for, such as slow loading of textures that can result in blurry details one second, magically snapping into a higher resolution the next. The frame rate is steady throughout the game, but this comes at the cost of regular screen tearing. The art direction is actually a plus for the Unreal engine, since it’s always been good at rendering shiny things, so a world composed entirely of robots and metal gives the game an accomplished—if slightly bland—layer of polish.

The big selling point in audio, particularly for fans, is the return of Peter Cullen as Optimus Prime. There’s only one man that can do the character’s voice justice and the developers at High Moon wisely did not mess with that. The other characters are largely approximations by new actors re-interpreting the voice work of the old series, but the dialog manages to nail the big, dumb sense of whimsy we all took drop dead seriously in the series when it hit the airwaves 25 years ago. The music also hearkens back to the excesses of the 80s with a mix of dramatic orchestral scores and cheesy guitar riffing, effortlessly switching back forth between the two with no warning. For sound effects, the signature Transformation Effect has been slightly tweaked, but it is still largely recognizable.

Transformers is divided into 10 chapters, five played from the view of the Decepticons and five from the Autobot perspective. Players get a chance to finally control iconic G1 characters like Starscream, Soundwave, Bumblebee and of course, Optimus Prime, something that hasn’t happened on a console since 1986. This is a straight up third-person shooting game in the vein of the Uncharted or Gears of War, but without the ability to take cover.

The basics are familiar, you run, you shoot, you engage enemies to determine Cybertron’s fate. The controls are tight and responsive, though the actual game itself, while putting in a solid performance, largely takes what works from past games in the genre without adding much to the genre itself. However, where it manages to distinguish itself from the rest of the pack in the best way possible is taking the transforming mechanic that is signature to the franchise and making it useful and meaningful in gameplay. This is new, intriguing, and it work You can transform only into a car or a jet mode, but you can do this at any time, and you can “combo it” into certain moves such as boosting as a jet to cover a large gap, transforming into a robot that is now hurtling into a nearby enemy and ending with a melee attack to finish the foe off.

There’s a single-player campaign that can be played in online co-op mode, and this is the recommended way to play. At every juncture of the game you are flanked by two companion In single player these are near useless AI friends that more often than not, simply get in the way. In co-op, with people that know what they are doing, some of the game’s more wicked difficulty spikes—particularly near the end—are not so daunting with actual team work in play.

The real surprise comes in multi-player, a meatier experience that takes the training wheels off of campaign mode. Competitive multi-player takes a lot from Call of Duty 4 with its XP, killstreak bonuses and usual versus mode There’s also a co-op mode called Escalation which is just Gears of War’s Horde mode in disguise, as a team of players battle waves of enemies increasing in number and difficulty. In multi-player the controls and transformation capabilities of the robots shines with fast, frenetic combat, and players switching forms as they attempt to get the upper hand. In many ways, the pure gameplay of multi-player is much stronger than the campaign itself and fans of multi-player will find a lot to love here.

Transformers: War for Cybertron is not going to set new standards for gaming. But fans of the Transformers finally have the game they’ve been waiting 25 years for. It’s solidly put together, it’s fun and it has an outstanding online component. It doesn’t innovate, but it respects the source material and the audience that has grown up around it. As a game it’s good, and provides value. As a Transformers game, it’s fantastic and fans can buy it with confidence.

Transformers: War for Cybertron is not going to set new standards for gaming. But fans of the Transformers finally have the game they’ve been waiting 25 years for.
REVIEW SCORE
7
File Under: Action, Adventure, PlayStation, Shooter, Transformers