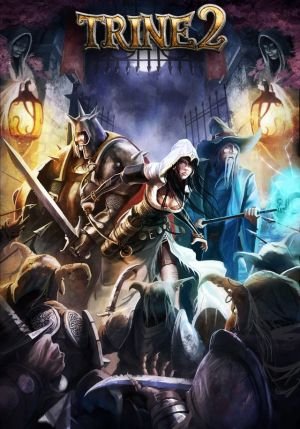 Trine 2’s story picks up after the end of the Trine, and wastes no time in reuniting the trio: of Amadeus, the wizard; Zoya, the thief; and Pontius, the knight. The plot involves killing off a Goblin King, helping out two mysterious princesses and features a predictable twist telegraphed so far in advance of its reveal that it hardly qualifies as such. That’s okay, though, because none of the story is all that essential to the experience. Once again, developers Frozenbyte have chosen to put the narrative far into the background. The story is a vehicle meant to explain why the player can swap characters on the fly (magic!), provide some context for the various levels, and offer some basic impetus for moving forward.

The gameplay, for the most part, will also be immediately recognizable to those who are familiar with Trine. Each level has a simple objective — get to the right side of the screen — and accomplishing it involves a mix of platform jumping, light combat, collectable hunting and puzzle solving. The real hook of the series is the use of three switchable player characters, all of whom have different, unique abilities. Pontius is able to smash through obstacles and deflect damage with a shield, Zoya is equipped with bow and arrow and a grapple hook, and Amadeus is able to conjure boxes and planks or manipulate the placement of objects using his magic powers.

While the first game used these different class divisions to create the only Sandbox Puzzle Game I’ve ever experienced, Trine 2 is a different animal — more concerned with logic than creativity in its puzzle design. Though it often feels as if there’s a “right” way to solve a problem, Trine’s physics system allow for a degree of leniency in overcoming an obstacle. Most puzzles take the form of high, vertical spaces that must be climbed, gates that must be held open or dangerous paths that must be traversed. The first Trine, in some ways, encouraged sloppier solutions. Having the wizard create makeshift crate towers or the thief double jump up a precipice made circumventing real head-scratchers a viable solution. Trine 2, on the other hand, does its best to discourage this kind of inventiveness. Puzzles are more intricately crafted, which, conversely, makes them feel less approachable than before.

It can be difficult to assess whether slapping together a series of teetering objects is the right way to progress or if a “neater” answer to a puzzle is required. The beginning of the game allows for greater creativity, but, by the end, players are forced into overcoming obstacles by approaching scenarios in a more rigid/thoughtful manner. Frozenbyte obviously sought to refine what it had made in the first place by crafting more nefarious puzzles with specific solutions that players are not invited to deviate from. While this may be welcomed by some, it feels like a step backward in a certain sense. Freedom was the most interesting aspect of Trine before. Now the game’s features come off less as toys and more as tools.

A greater focus on co-operative multiplayer (networked co-op has now been added alongside local play) further highlights this type of problem. Hopping online to clear a particularly frustrating challenge throws Trine 2’s balance far out of proportion, and can sometimes make it feel as if group tactics offer the only viable solutions to the game’s puzzles. Challenges that would require serious forethought in a solo run can easily be overcome when three players are all working together. Trine 2’s online co-op ensures that more players will be able to easily jump into games with others and, while this is certainly a welcome alternative to the slower progression of the single player campaign, it also undermines Frozenbyte’s decision to craft stricter puzzles. The sense of accomplishment gained by overcoming a speed bump and continuing on through a level is often good enough to make Frozenbyte’s strange breed of puzzle solving a non-issue — but the overall effect is one of imbalance.

These design wrinkles are partially overcome through the game’s wonderful audio-visual presentation. Trine 2’s aesthetic, much like its predecessor, draws from a rich, colourful palette that gives the sensation more of playing through a lavishly painted storybook than sets of carefully designed digital levels. The sequel makes large advances in graphical fidelity and general style too, creating a fuller realization of the look and feel Frozenbyte reached for in the series’ first instalment. Improvements in lighting and animation help make the world feel even more alive and simply moving a character around is a joy (something the developers are obviously proud of as the playable menu screen shows).

There’s also been a huge increase in stylistic variety. The goblins come in several different iterations and a number of impressive-looking monsters make appearances as bosses or puzzle components. Each of the 13 levels also feature their own distinct looks and, whether a snowy landscape, storm-tossed harbour or castle interior, are packed with fine details that add to the sense of exploring the inner pages of a lovingly illustrated volume of fables. It says a lot about Trine 2 that the desire to see more of the game’s beautiful environments can help keep motivation high while solving even the most frustrating puzzles.

Trine 2’s presentation is made even more impressive by way of its pitch-perfect sound design. Nuanced touches like the slight rattling of metal pieces while playing as the armoured knight, the thwock of the thief’s grappling hook embedding itself into a wooden surface or the muffling of the game’s soundtrack while underwater all help to make for a stunning audio experience. The music is also quite good, if a little repetitive. Aside from the swell in volume that accompanies the duration of every enemy encounter (and makes ambushes and the end of fights too easy to predict) it’s mainly kept to the background and suits the environments well.

But this isn’t always enough — Trine 2 ultimately leaves an impression that is slightly more negative than positive. For all of its charm and occasional brilliance, it’s difficult to claim that this sequel is a real improvement over its predecessor. Puzzle fans willing to ignore the false freedom promised by the game’s mechanics and play by its rules could find something special here, but those enticed by a gussied-up refinement of the original Trine should probably just stick with the series’ first entry.

Trine 2’s story picks up after the end of the Trine, and wastes no time in reuniting the trio: of Amadeus, the wizard; Zoya, the thief; and Pontius, the knight.
REVIEW SCORE
6
File Under: Action, PC, Strategy