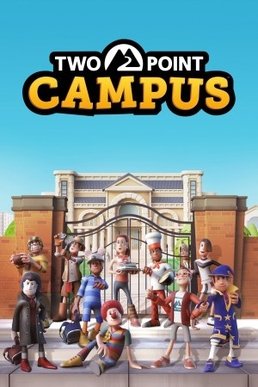 I thought I finished school back in 08’ but Two Point Campus sucked me back in just in time for back-to-school, and it was a lot more fun on the Xbox Series X than it was in real life. Two Point Studios and SEGA brought us Two Point Hospital in 2018 and are back four years later with Two Point Campus, a college/university focused version of the Two Point title.

I am a fan of sim games all around. Once upon a time The Sims 4 was a regular part of my gaming rotation, and right now Stardew Valley and Little Witch in the Woods are my go-tos. Two Point Campus fit right in with the rest, and perhaps even hooked me a little better than some others. In the game, you focus on building the perfect campus, whether it be for wizards, artists, tech enthusiasts, or even spies. Your job is to focus on the buildings, classes, decorations, budget, staff and so much more.

Jumping into Two Point Campus, I thought it was a breeze during the first few levels, Freshleigh Meadows, Piazza Lanatra and Mitton University. Granted, these are tutorials and early gameplay, meant to teach you the ropes. Something that I loved while learning how to play Two Point Campus was that each level teaches you something new. It wasn’t until Spiffinmoore (Wizardry level) that you learned about loans, and each level taught you a different aspect of the game.

Though that is great when starting out, I really just wanted to bang every level out to the minimum requirements, so I could unlock the other levels, and then focus on where I was the happiest. This is where some personal organizational issues came into play though. Though you’re able to put any classes you want in any map…it felt so, so wrong to have jousting next to my VR building.

My own neuroses aside, Two Point Campus really does let your imagination run wild. You can eventually unlock different outfits, wall coverings and decorations. Items that affect different attributes in the game like entertainment, hunger, thirst, attractiveness and more can also be unlocked, and you’ll need to be sure to keep a balance throughout your campus, or you will find yourself with whiny staff and students.

Controlling the map was made very simple with the controller’s joysticks. Being able to pan, zoom and tilt really allowed me to check out what my campus was up to from every angle. It also helped with placing objects in just the right spot. My only complaint about visibility would be when trying to assess the campus’ needs.

Entertainment, hunger, heat etc are all found in a submenu and when turned on it will highlight where they are on the map. The issue is that this isn’t a simple toggle, it is a few menus deep and takes time to turn on and off, and you need to exit the menu in order to move the map around. I found it more frustrating than anything.

I did run into a few glitches during gameplay. Once I clearly completed a mission, but the game wouldn’t accept that I placed the correct building. After trying a few things, I ultimately had to close out and load back up and that fixed things. I also had a recurring issue when scrolling through the different things I could build. When looking through the buildings, it would often bump me to the top of the screen, and get stuck on a loop between the top five or so. Again, closing and opening it helped, but it was still frustrating.

The menu system is a bit more complicated than it needs to be. When you think of games like The Sims, for instance, it was always much easier to handle on PC. Point and click is a much simpler solution when there are just so many menu levels to get through. There were often times when I would get stuck trying to find information about a room, student or teacher. Every pop up menu has sub categories, and it can take some time before you catch on to where it all is, especially when they all have their own bindings on the Xbox Series X controller.

“Two Point Campus has a lot to keep track of, and depending on your gameplay, you may take advantage of a lot of it, or neglect it.”

In all actuality, there are probably many options that could have been removed from the game, avoiding the menu overkill altogether. That really depends on how you like to play, and just how much you want to micromanage your staff, students and classes. You have the option to place everyone at a job, send students to Private Tuition, respond to individual wants and needs, plan parties, schedule each individual class yourself and so much more.

Two Point Campus has a lot to keep track of, and depending on your gameplay, you may take advantage of a lot of it, or neglect it. Realistically, the game still runs pretty well even if you aren’t as hands-on with individual people. I loved that Two Point Studios created the game in a way that allows different kinds of playstyles while still giving players the chance to succeed. I can’t wait to do a deep dive into my next map and really focus all my energy on one campus.

The replay value that Two Point Campus has is incredible. Not only are there multiple maps and themes, there are plenty of course options, aesthetic choices, and even long-term achievements (“Career Goals”) to complete. I was thrilled that the game will keep challenging me, and that there are options if I’m looking to create something new.

Two Point Campus is a funny, quirky, complex simulation game that gives players plenty to do in the long run. With a few quality of life issues that may just be personal complaints for me, this sim really managed to impress. Two Point Campus will absolutely be a game I come back to time and time again; I’m just waiting for that motherlode cheat!