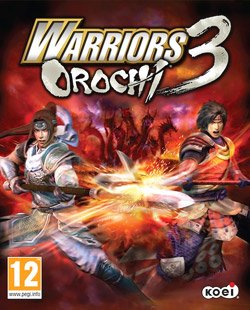 The conclusion of the Warriors Orochi trilogy, WO3 is going out with a bang.

The Warriors titles are KOEI’s action games based in ancient China and Japan, following the events of historical figures through endless battles and scenarios, naturally with a degree of artistic license. The Warriors Orochi games bring the characters from both Dynasty Warriors and Samurai Warriors together into one mystical world. The mighty demon Orochi brings together the heroes of the ages in a world made up of sections of the battlefields from both games and corrupted by his power.

Warriors Orochi 3 increases the cast of playable characters to 132. The largest roster such a game has ever seen. The player puts together a team of three and heads into battle. Each character has their own move set and play style. Characters each have a special ability that they bring to the team, some are found on multiple characters while a few are unique. This further expands the options open to the player to create their perfect team.

Characters have a bonds rating with each other, this increases by fighting on the same side as the character in battle as well as completing missions for them within a battle. There is also a teahouse where you can pay to host a party for all the characters that you’ve unlocked to that point.

The story of Warriors Orochi 3 takes a trip through time. It begins with the Hydra, a massive embodiment of Orochi’s power, destroying the world and killing the heroes of the land. Only three survive to try and bring down the Hydra, but it’s a hopeless battle. Before they fall a being from the mystic realm comes to them at the last minute and pulls them through time. Now begins their journey into the past to try and change history so they can save the lives of those who feel to the Hydra.

The time travel gameplay makes for a unique experience. You go to stages from the past of the characters you’ve unlocked, where they’ve seen their friends and allies die. Your efforts can change the tide of battle and save them. However there will be those who seem to be in no win situations, isolated or wounded when the battle begins and quickly finished off. But that will unlock new stages where you can find ways of saving them. If someone was wounded in a previous battle, which caused their death in the last one, you can go back to that original battle to ensure that they pull through unharmed. Now when you return to the Redux version of the stage they died on the tables will turn and they can pull through, and thus be recruited into your ever-growing roster.

Graphically and musically, the game excels. The landscapes are beautiful, the characters have great detail and the music scores are some of the best the Warriors games have produced to date. The only thing lacking is an English voice over. Though everything has subtitles and text so following the story isn’t an issue. And you might pick up a little Japanese as you play.

However there are some flaws. KOEI has a habit of taking one step forward and two steps back, introducing great new features but making some missteps with existing elements. The new storyline and character system is great, however the multiplayer has unfortunately taken a hit.

The multiplayer for WO3 allows a second player to join in either locally on the same system or via online. However unlike previous games, where the second player could join in and always be ready to go, the second player needs to rejoin for each battle and reselect their team each time. With the missions that the player can do for characters to raise bonds, the second player can’t help complete the goals. So if 600 kills are needed, only player one can accomplish this. However the second player can fail missions for the first, if they break the rules laid down (such as dropping below a certain health amount). It makes little sense to have them unable to help but able to hinder.

The multiplayer does still work well overall, even with the slight oddities present. Both local and online multiplayer is smooth and fun. Online gives somewhat better performance, as each player will be on their own system and have the full processing power available. With local co-op enemies will be split between both players, so while there’s the same total enemies present they appear a little more spread out.

Warriors Orochi 3 is a wonderful conclusion to a great series. If you’re a fan of the Warriors games it’s a definite must have. Even for those who are new to the series, this is a wonderful game for your action fix.

Warriors Orochi 3 increases the cast of playable characters to 132. The largest roster such a game has ever seen.
REVIEW SCORE
8
File Under: Action, Adventure, fighting game, Japan, PlayStation