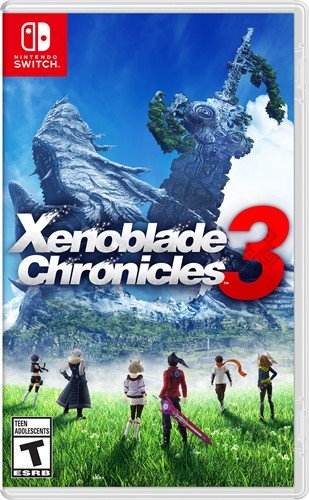 With the Nintendo Switch being on the market for over five years now, first-party titles tend to take full advantage of their target hardware during its maturity. Xenoblade Chronicles 3 is the latest game to continue that trend, fully utilizing the Nvidia-based Tegra X1 processor found inside Nintendo’s hybrid console.

Monolith Soft has done an outstanding job delivering a title with the scope and grandiose feeling that encompasses the world of Xenoblade Chronicles 3. With solid visuals and consistent performance across both docked and undocked play, Xenoblade Chronicles 3 is a hallmark title for the Nintendo Switch.

Clocking in at a solid 55 hours, I mostly stuck to the game’s main narrative. However, I did take the time to complete several hero quests, which, although optional, felt imperative to the overall experience of Xenoblade Chronicles 3 (more on that later).

Xenoblade Chronicles 3 is the latest entry into Monolith Soft’s Xeno series, which initially began life on Sony’s first PlayStation console with game director Tetsuya Takahashi at the helm. With Nintendo’s acquisition of Monolith Soft in 2007, the Blade moniker was added to the series, which also acted as a pseudo reboot of the franchise proper.

Starting with the quality of life improvements, as mentioned in my preview of the game, Xenoblade Chronicles 3 resolves two of the most significant issues I had with the second game. Firstly, you no longer have to worry about elevation or trying to figure out where to go. Instead, Xenoblade Chronicles 3 offers an intuitive waypoint system that can be activated with a button combination, making finding your destination an afterthought, which for a game world as large as Aionios, is a literal game changer.

Secondly, Xenoblade Chronicles 2’s late-game forced the player to utilize skill-based arts (ala Pokémon) to clear obstructions on the overworld map. Xenoblade Chronicles 3 features similar obstacles but graciously does not tie them to specific moves that the player may not have available, taking away the tedium of scrambling to move on.

Combat in Xenoblade Chronicles 3 is the meat and potatoes of its gameplay loop. Tutorials that continue to trickle in 10-15 hours into the game, learning the ins and outs of battling can be both rewarding and frustratingly convoluted with its abundant use of on-screen visual noise, often resembling a Japanese pachinko machine rather than anything discernible.

Even still, learning to combo, stagger, transform and perform linked-special moves adds a wide gamut of ways to tackle encounters in Xenoblade Chronicles 3. Furthermore, the ability to change classes and adopt new fighting styles, unlocking fusion combos, elevates Xenoblade Chronicles 3 above and beyond its predecessors.

Easily, my favourite addition to Xenoblade Chronicles 3 is not in its welcome but nuanced quality of life improvements or its layered combat system, but rather, its take and evolution on the core crystal system. Xenoblade Chronicles 2 gave the player access to core crystals which, in essence, acted as an in-game gacha system, netting you with rare Blades or unique characters that could aid you during combat.

Xenoblade Chronicles 3, instead, changes these optional characters into just falling short of being full-on party members, Hero Quests, which act as unique side ventures that are required to enlist said optional characters, feature fully-voiced scenes and flesh out the additional 19 party members in a manner similar to older titles, such as Final Fantasy VI with the added benefit and flourish of modern gaming.

Xenoblade Chronicles 3’s narrative continually surprised me, with elements seemingly and lovingly inspired from all manners of media, including standouts such as Star Wars and, of course, animes as well, including everything from Attack on Titan, Berserk, Evangelion, and Gantz, specifically in reference to the Keves uniform worn by certain characters resembling similar attire worn by characters in Hiroya Oku’s series.

With the main bulk of the story easily hitting the 50-hour mark, Xenoblade Chronicles 3’s story is almost as expansive as its game world, which features large open zones that encourage exploration. Going off the beaten path often directs the player to quest leads, valuable items, and special skirmishes that require the player to choose a side, with either EXP or a secondary currency used for specific vendors as the reward.

Similarly, the player can liberate specific areas within Xenoblade Chronicles 3’s world, which further opens up quest leads, unique NPCs and other bonuses in addition to increasing the hostility of opposing forces in the area.

If there is one thing I did not love about Xenoblade Chronicles 3, it would be an issue I have with the series as a whole, specifically in its English localization. I’m a huge fan of British English, particularly when it’s fitting in medieval-style games such as Fire Emblem and, most recently, Elden Ring, which naturally lends itself to that distinctly European disposition.

Unfortunately, Xenoblade as a series and Xenoblade Chronicles 3, in particular, feel very much like a sci-fi anime-inspired game with its cell-shaded aesthetic that makes it feel wholly Japanese. Despite including a Japanese track, the actual script for the game tends to take too many liberties that ultimately feel at odds with the atmosphere and themes of the game.

Thankfully, the above issue is very subjective and will likely not bother most, especially if you’re already a fan of the older dubs from previous entries into the series.