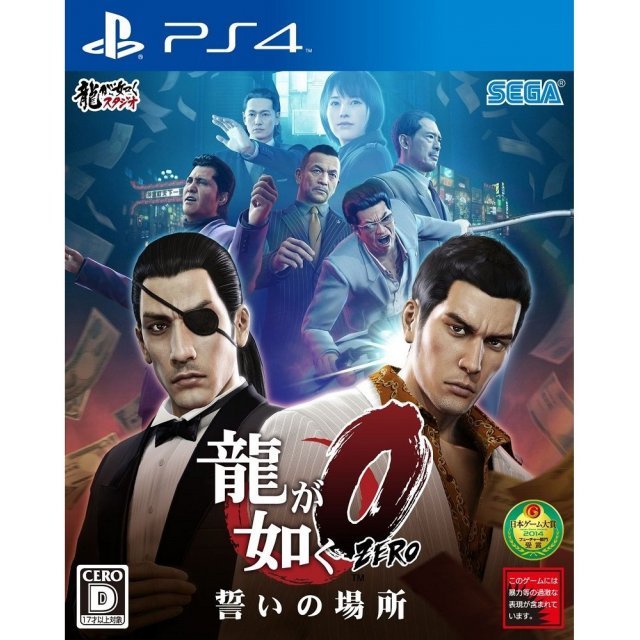 The Yakuza franchise is often called the Grand Theft Auto of Japan, but frankly, that’s a downright disingenuous statement and a total false equivalency. Sure, both games are about the criminal underworld, but the similarities end there. Just as Scarface is not The Godfather, Yakuza is not Grand Theft Auto. Which, incidentally, is why I’ve the franchise for close to a decade at this point—it’s a franchise that defies comparison with any other modern game, and something unlike anything on the market. Yakuza Zero, while not as much of a step forward as some may like, is an encapsulation of all the things that make the series so unique with a nice layer of polish added to it.

A prequel to the franchise, Yakuza Zero splits the narrative focus down the middle between Kazuma Kiryu and Goro Majima. Kiryu’s narrative arc revolves around being framed for murder, a real estate conspiracy, and a personal journey to redeem the man who adopted him. Majima’s focuses on the flamboyant, unhinged mobster’s attempts at turning a hostess club around in order to get back in the Yakuza after being expelled. It’s a rousing, high-spirited tale of extraordinarily handsome men beating up not-as-handsome men, accompanied by a sprawling cast, dynamic setpieces, and some truly cinematic cutscenes. This narrative alone, if played straight through, will undoubtedly take most players several dozen hours to get through.

But playing the narrative straight through would lead to players overlook the game’s solid gold side content. Yakuza has always been a franchise concerned with the minutiae of society, and this shows through in its surprisingly rich sub-stories. Random passersby will stop you on the street, asking for help with their problems. Occasionally, it’ll be as simple as helping a little girl win a doll from a crane, or assisting a production crew with shooting a TV episode. But more often than not, it’s off-the-wall craziness; from helping a mother free her daughter from a cult to pretending you’re a random girl’s boyfriend to fool her father. Some side content even houses full story arcs, such as Kiryu’s pursuit of becoming a pro disco dancer and his rise through the ranks of competitive dancing.

Most games can’t deliver that in 10 to 20 hours. Let that sink in for a second. I’ll go even further—most open-world games aren’t really true to life, and don’t actually feel like living, breathing places with real inhabitants. They’re pretty window dressing with things to kill and boxes to check. Yakuza Zero is the antithesis to that. Much like Sega’s earlier Shenmue, Yakuza Zero and the franchise as a whole feel like a tangible place that you’re visiting each time you fire up the game. It’s hard to describe, but easy to understand once experienced. Bonus content like karaoke, darts, pool, dancing, and even playing arcade games adds to this feeling of completion.

However, Yakuza Zero is not only a virtual microcosm of 80’s Japan. It’s also a stellar brawler, the likes of which we really don’t get much of anymore. Both playable characters have three separate fighting styles that control entirely differently from each other, and can be changed on a dime to suit any given situation. This is the first time that the feature has been present in the series, and while at first it seems kind of extraneous, you’ll sometimes find yourself in situations where one style will come in handy over another. For example, a style that focuses on weapon combat will be useful in a situation where several blunt objects are lying around, while a faster kickboxing style will give players an advantage over a slower opponent. While I would’ve liked to see a more clear-cut emphasis on style differences (you can basically win most fights with any style if you’re good enough) it’s a neat feature that I hope returns in Yakuza 6.

Another difference betweenYakuza Zero and the rest of the series is in the way leveling works. Experience points are now gone, and in their place is an interesting risk/reward character-building mechanic. The way Kiryu and Majima are strengthened is by pumping money into themselves, or as Kiryu cheekily puts it, “literally investing in himself.” Money flies out of enemies in a silly, comical sort of way, and players will quickly be walking around with millions upon millions of dollars in your pocket. In addition to buying items and doing side activities, this money is used to buy upgrades for your health, strength, and moveset (although additional moves are primarily learned through side-missions.) However, a roaming duo of thugs can rough players up and steal every yen on your character if you engage in a fight with them. On the other hand, they also carry a large sum of money, and if you can beat them, you’ll get a huge payday. This whole concept of EXP being a finite resource, like a more punishing version of Metro 2033’s bullet/currency dilemma, is a fun twist on the formula and adds a degree of caution that I appreciate.

From a technical standpoint, Yakuza Zero is sublime. The graphics are gorgeous; with character models having the most minute details filled in, and both maps are filled with rich details and vibrant colours. It also all runs at a smooth 60 FPS, which honestly is something that must be seen to be believed, considering the platform its on and how much detail went into the game. As usual, the score is also extraordinary, and the voice acting is top-notch stuff. Across the board, Zero is a technical and stylistic marvel.

So yes, Yakuza is much more than “Grand Theft Auto in Japan,” and Yakuza Zero stands as a testament to why that is. It’s a balance between serious drama and clever humour, gentle humanity and broad satire, tangible immersion and ludic violence. The world players experience isn’t just a sandbox—it’s a diverse, vibrant community with people who feel real and places that feel occupied. In other words, players aren’t at the center of this world. It’s not a power fantasy. Instead, they take the role of just another person on the street, involved in their own personal drama just as much as everyone around them. More than ever, Yakuza feels like Shenmue’s logical successor, and a standard that Western open-world games have, quite honestly, never reached.

If Yakuza Zero, a prequel meant to buy time for the next main entry to be completed, is this good, then Yakuza 6 will likely be nothing short of a bloody masterpiece.

A novel twist on familiar gameplay elements, Yakuza Zero once again delivers a unique blend of real-world immersion, humanistic storytelling, and some of the best action gameplay on the market.
REVIEW SCORE
9
File Under: PlayStation, Sega