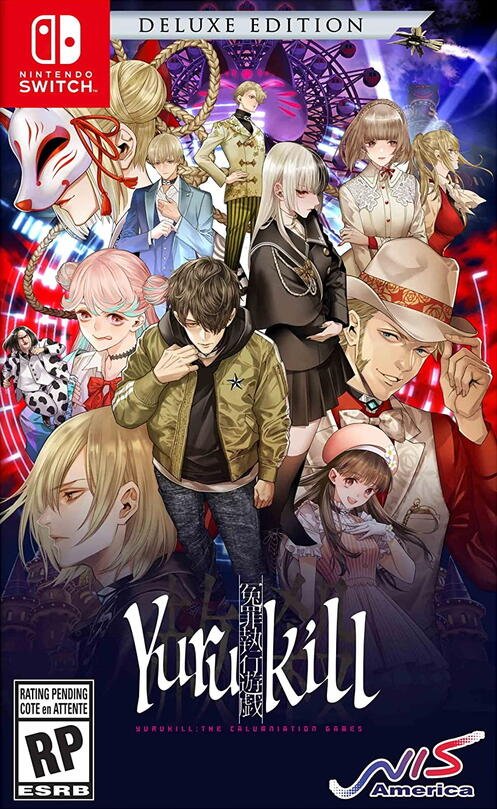 I am an avid anime fan, and watch a lot of the newest stuff, ranging from the newest season of Jujutsu Kaisen to the latest Attack On Titan. These huge juggernauts keep me up at night begging me to continue their narrative, and this is exactly where the messy title Yurukill: The Calumnation Games comes into play, except it is not reliable and not efficient.

Yurukill begins with introducing the audience to the easiest to understand protagonist ever. The worst part is however, the protagonist fulfills an anime trope that has been abused so often it actually hurts to hear it again. The ‘obviously’ wrongfully accused main character Sengoku (of which there are many other main characters) suggests they are innocent of an arsonist murder spree, and they gather sympathy from some of the other main faces that will become commonplace throughout the narrative.

But then, the Danganronpa aspect of the title kicks in, the murder mystery aspect, and begs the player to determine if the person they are following is guilty or innocent. This becomes a solid ‘Whodunnit?’ type mystery, with backbone, excellent characters, and prolific voice acting talent. NIS grasped the best of the best with Saori Hayami of 13 Sentinels as the voice actor for Rina Azami, and the soundtrack really serenades the player.

While the title doesn’t skimp on excellent sound, audio, and interaction, it does with general gameplay. Yurukill goes into such heavy detail to outline stories of main characters. The details are admittedly enthralling, showing the player why they should care about them. And then Yurukill fumbles their entire idea completely.

Yurukill becomes a type of Ace Attorney, a type of Saori Hayami Xevious, a type of Professor Layton, and last but not least, a type of Visual Novel without ever establishing its own identity. The stellar voice cast and excellent musical score are absolutely enthralling. This title absolutely has teeth, but this is not a good thing.

Yurukill establishes its identity with its excellent voice acting, an excellent music score, and a solid narrative that makes the lead a weirdo antagonist. This is similar to Monokuma of Danganronpa fame, fully equipped with her own ‘bin’ type vocal additions—the player is left reading countless layers of dialogue. The voice acting is absolutely top notch, in Japanese, I prefer subtitles. But, there are no options. There are no English voice overs, but to be honest that’s the least Yurukill has to worry about.

Yurukill attempts to be a mystery/rail shooter/visual novel type title. The rail shooting parts are as fun as playing Xevious as always, the Ace Attorney like segments are enthralling, and hearing the end of each story is honestly a solid finish on a told novel.

However, this title borrows heavily from many anime tropes. We have ALL of them, and I mean ALL. There is an idol pop star type AND her biggest fan, there is an amnesiac and someone who hates him for not remembering, there is a filler duo that adds comedy value. This is basically every decent anime that a person can play. Where the gameplay is concerned, that’s another story.

On rail shooters make sense, destroy the forward obstacle, continue forward. This title does not. I understand trying to shoot against someone who has wronged you, or to try and figure out the character Saori Hayami, a basically ‘why?’ But this title takes far too many liberties, a woman who attempts murder is sweetly forgiven, but that’s not good enough.

Yurukill: The Calumnation Games is an excellent title, if it were a multiple game, and if it decided to be a visual novel instead of the oddest mashup of genres on the market. I personally am a huge fan of everything this title has to offer, and yet, it’s just thrown together like a poor salad with frail lettuce and limp celery. The Xevious bits are so good, but the stale points where I need to be reminded where I am (yes that happens) are seriously Bin-awful. This title needs an identity, and it doesn’t have one.

Yurukill: The Calumnation Games has a decent storyline, and is a solid time, but for the price point, there are far better options.
REVIEW SCORE
7
File Under: Anime