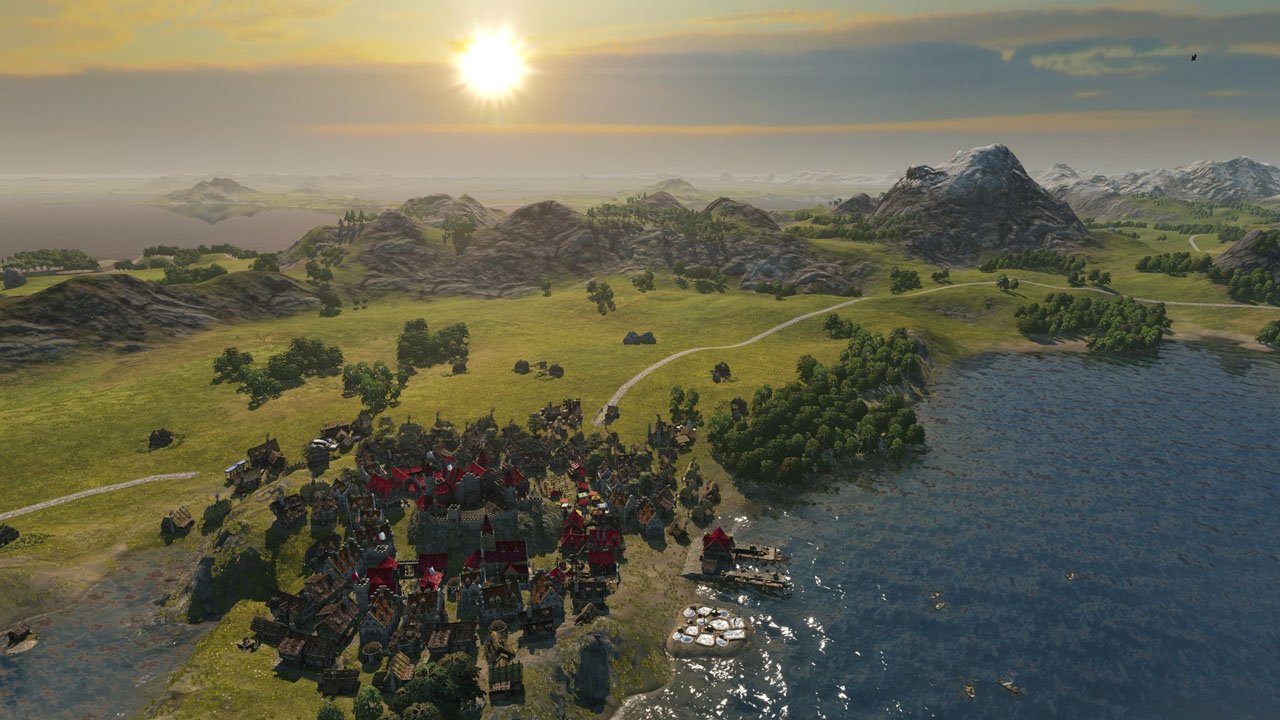 It’s kind of strange to admit that while I’m primarily a console gamer, I have a connection to many real time strategy (RTS) franchises. Yes, I grew up playing the latest Nintendo and Sega home systems, but I did manage to dabble in RTS games like Warcraft III, the Command and Conquer series, and Civilization on my brother’s PC. In fact, those are some of my fondest memories of gaming. Now that I’m older and have a lot less expendable cash, I don’t have a proper gaming PC, and my RTS days seem to be gone. The main reason for this is that genre does not transfer well into the console realm. Sure, some games like Pikmin tend to break that trend, but for the most part, the RTS genre is too sophisticated and complex to break down into a controller layout. That’s kind of how I feel about Gaming Minds Studios’ PS4 port of Grand Ages: Medieval; it’s a great game that doesn’t quite translate well enough for a console experience.

The whole premise of the game, much like Civilization, is to build a sustainable empire. There is a single player mode with a story involving the son of an imperial guard who is pushed to an overseer role for a new empress after his father is promoted. To be honest, it’s not very memorable, but it acts as more of a tutorial for the free play mode. I actually had more issues playing through the campaign than when I was left to my own devices. Maybe having my chains broken allowed me to experiment more without my town’s entire economy dropping into a recession like Stephen Harper was in power, but there was something liberating about the open world aspect of the game. Even little annoyances I had during the campaign seemed to go away by switching modes. For whatever reason, in the story mode, I could not properly settle a town without it taking far too long, even if that was my only objective. Part of this is because my units menu lumped builders (who are mainly used to make roads) and settlers (who are only used to create towns) together under the same hub. When I would call upon my settlers, I would have issues actually getting them out instead of the building crew. There was no way I could separate the two. I managed to do it by accident a few times, but I never really figured it out.  That only happened in the campaign. In the more fulfilling free play mode, I could build multiple units and separate them as I saw fit. The issue is probably a lot more solvable with a more precise mouse instead of a thumbstick, but I can’t speak to the validity of that argument without playing the PC version of the game.

Regardless, the objective is to build a financial powerhouse. Economics is the name of the game here, so setting up trade routes, new towns, and ensuring your towns have a variety of different goods to offer is important. Supply and demand is in effect and if there is too much market saturation, your traders will charge less for goods. Each area of the map is rich in different materials that can be harnessed and sold (one could have an abundance of honey and fish, whereas another is close to an area where you can mine), so keeping track of things like that and ensuring that you trade with places that actually need these goods is important as well. There are multiple research trees that affect your town’s output, military units, or build options. Each research point actually makes a difference in your town, and it makes your decisions mean something.

That aspect of the game is definitely the most interesting, but after that, there’s less polish. Combat is kind of lacking and not engaging. The characters have no animation, and all you really do is just watch to see whose number of troops depletes first. It’s one part of the entire experience that feels incomplete, which is frustrating because playing a crazy world dominator is the best part of this type of game.  Another kind of large issue is a lack of feedback. It’s hard to gauge why construction of a certain building ceased, so fixing situations like that is a chore. On the bright side, managing your economy and efficiency is very easy, and tracking it is simple too. You can see where you’re losing money, and rectify the situation with little difficulty. With a game like this, there has to be some give and take.

It’s obvious the direction Gaming Minds Studios wants to take here. There’s a strong focus on economics with a lesser emphasis on everything else. The combat doesn’t touch franchises like Total War, and the city building doesn’t come close to properties like Civilization, but despite that, it’s managed to cut out its own niche. It’s not as balanced as its counterparts, but it’s still a really fun game. It’s unfortunate that RTS doesn’t translate as well to consoles, but even with console limitations, Grand Ages: Medieval is a really engaging experience.

It’s not as balanced as its counterparts, but it’s still a really fun game.