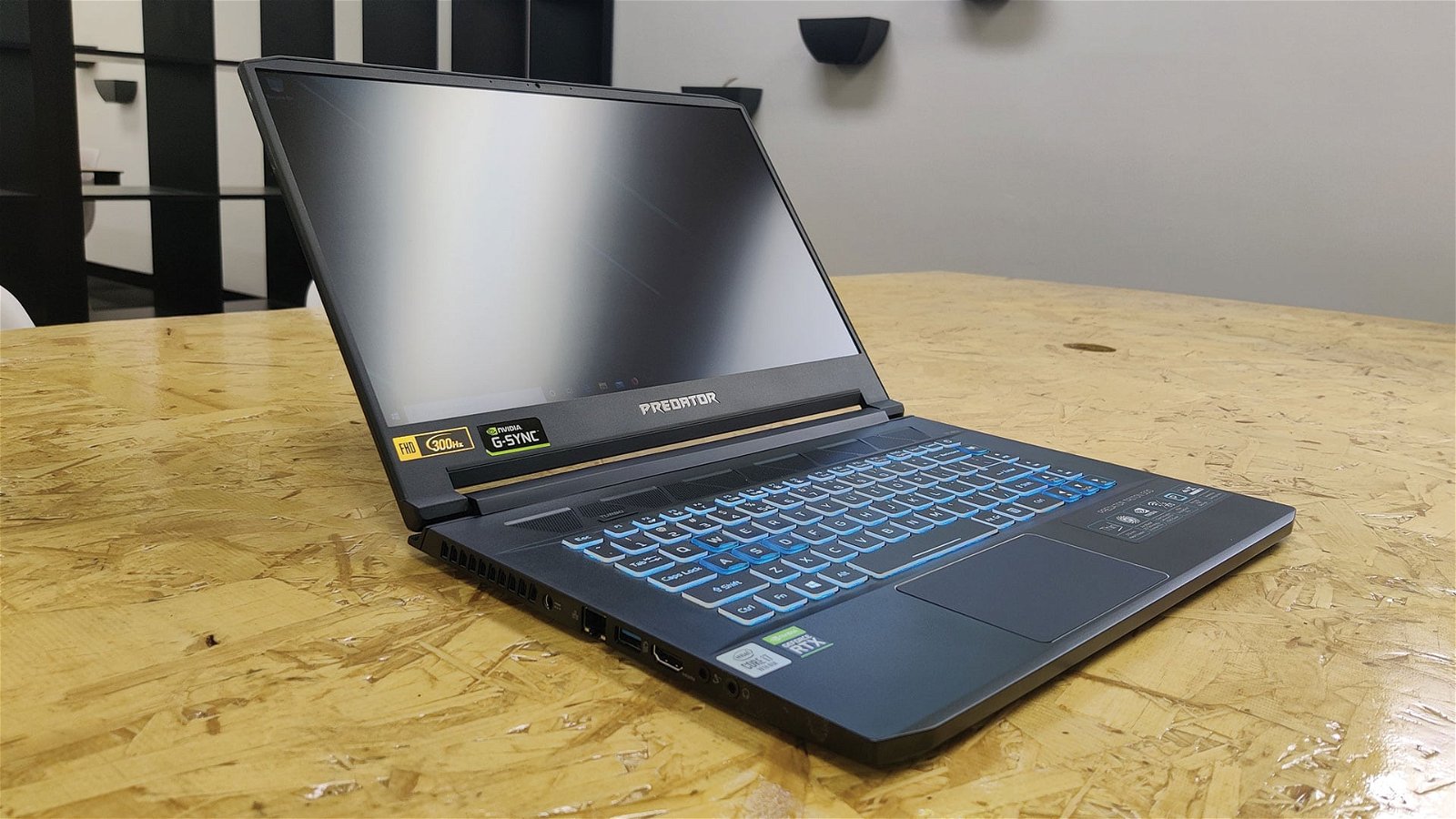 When I decided to go back to school in 2016, I needed a new computer that would meet my needs for an art institute. Ultimately, I needed a machine that could easily manage Adobe’s Creative Cloud suite of programs, and of course, one that could game. I ended up going with the Acer Predator 17 G9-79, a beast of a laptop, both in its specs and its heft.

Unfortunately, earlier this year, my trusted G9-79 had decided to fry itself, leaving me without a computer but even still that did not deter me from the opportunity in taking a look at the Predator Triton 500.

Right off the bat, the biggest draw for me, with the Predator Triton 500 is its size and portability factor, thanks to the inclusion of Nvidia’s Max-Q approach to minimizing bulk and maximizing performance on their newer laptop offerings. Speaking of design, the Acer Predator Triton 500 features a unibody metal chassis, perforated with rows of ventilation openings alongside the sides and back of the 15.6” unit. The Triton 500 also comes in at only 4.6 pounds, making it feel ultra-portable and sleek.

Without a doubt, one of the biggest upgrades the Triton 500 has over previously released Predator branded machines, is it’s staggeringly fast screen with a refresh rate of 300Hz. In essence, gaming on the Triton 500’s 4k capable screen feels akin to playing on an old-school CRT monitor, with unparalleled response time in games and applications. Of course, a blazing-fast response time would mean nothing without an equally fast GPU, and the Predator Triton 500 does not disappoint with its built-in Nvidia GeForce RTX 2080 Super.

Talking numbers, playing most contemporary releases on ultra detail on the Triton 500 is not an issue what so ever. Doom Eternal, in particular, a game that I reviewed on the PlayStation 4 Pro, is a stellar example of the kind of performance serious PC players can expect, with the game running at an average of 150fps, peaking at around 250fps on max settings (and robbing me of ever wanting to play the game on a console again).

Older releases, such as CounterStrike: Global Offensive, a game that inherently benefits from a higher refresh rate display, on the Triton 500 caps out at around 300 FPS, on max settings. Ultimately those serious about competitive FPS affairs will love the Triton 500’s silky-smooth refresh rate that allows for nuanced movement in-game, both with keyboard and mouse or a controller.

Uncompromised gaming performance isn’t the only thing the Nvidia GeForce RTX 2080 Super has going for it either. Although the games that have native ray tracing support are rather thin, the two games I did try the feature on, managed to impress. Starting with Minecraft, a game that somehow seems older than me despite being released in 2009, fully takes advantage of ray tracing, with noticeable improvements in the light cast on most surfaces. Metal, water, and light cast from torches, in particular, look amazing, giving each surface a new-found layer of tangibility, giving depth the individual masses and structures that populate the various worlds within the game.

Performance-wise, ray traying, unfortunately, comes with a high cost, with Minecraft dropping from over 100+FPS to around 66-70FPS. Thankfully, a game like Minecraft is perfectly playable at even 30FPS, making ray tracing an apt fit for the game.

The other game I tried the ray-tracing capabilities of the Triton 500 with was Metro: Exodus, which goes from around 130FPS to 60-80 with Ray Tracing enabled at the most aggressive setting allowed. In terms of image quality differences, ray tracing in the title is understandably more subtle than something like Minecraft. Still, the differences are apparent, especially in expansive, open areas that have light bouncing on snow and debris, in addition to darker corridors that have smaller, individual light sources, such as the lighter of the player character.

When it comes down to it, the ray-tracing capabilities of the Predator Triton 500 are great, but that may change over time, as currently, there are only a handful of games that officially support the still burgeoning technology.

The Triton 500 SKU I looked at came equipped with 32GBs of RAM and an Intel Core i7-10750H 10th gen CPU, which in terms of performance made pretty much anything thrown at the Triton 500 a breeze in terms of workload capabilities. As someone who likes to spend his free time drawing and messing around in applications such as Photoshop, one issue I’ve had in the past is when working on higher resolution files with larger brushes, something that often, chugged even my G9-79. On the Triton 500, Photoshop performance, although not buttery smooth, was incredibly responsive, with each stroke, even after dozens of layers, feeling snappy and responsive, no doubt thanks to the inclusion of the 300hz IPS display.

A turbo button can be found near the top of the Function keys, allowing instant overclocking and maximum output. Turbo, which from testing, seems to allow for a more consistent experience in terms of framerates in more demanding titles, such as the aforementioned Doom Eternal, with the added cost of the computer sounding like a jet engine, which thankfully can be alleviated with a good pair of headphones.

I/O wise, the Predator Triton 500 is rather paltry but more than enough for those who just need a machine for gaming. Equipped with 3 USB 3.0 ports, mini-display, HDMI, ethernet, mic and audio, and a Thunderbolt USB Type-C port, the Triton 500 has enough to get started, with the possibility for expansion through USB type-C. Still, an included SD card slot would have been nice, as I find myself needing one more often than not these days.

Equipped with a 1TB Samsung branded NVME compliant SSD, the Triton 500 features near-instant bootup time and fast loading in games. However, it should be noted, I found the computer to be slightly slower than expected when waking from sleep, not Windows, but rather the responsiveness of the keyboards registering that it has been awoken seems to take longer than necessary. A very minor gripe, and something that will most likely not bother anyone, but still worth mentioning.

Aside from gaming, the Acer Predator Triton 500 is excellent for work, as it is light enough to carry, featuring a chiclet-style RGB keyboard, reminiscent of something like a Macbook Pro or any, modern laptop, topped off with a responsive-feeling trackpad. Additionally, due to its minimalist, metal-finish and blue LED-powered ornamental logo, the Predator Triton 500 feels clean, forgoing the gaudy-gamer aesthetic, often associated with some other high-end gaming machines.

Unfortunately, but unsurprisingly, like any gaming beast, the Triton 500 suffers from an abysmal battery-life, lasting around two and a half to three hours, making it useless without a charger, especially for those who want to game with it on the go.

The Acer Predator Triton 500 is an uncompromised gaming experience from start to finish, one that comes with a hefty price point, making it rather difficult to recommend sans for those who can afford it and want the best when it comes to a mobile gaming experience. For everyone else, a Desktop computer with similar specs is likely a better fit, minus the 300hz screen.