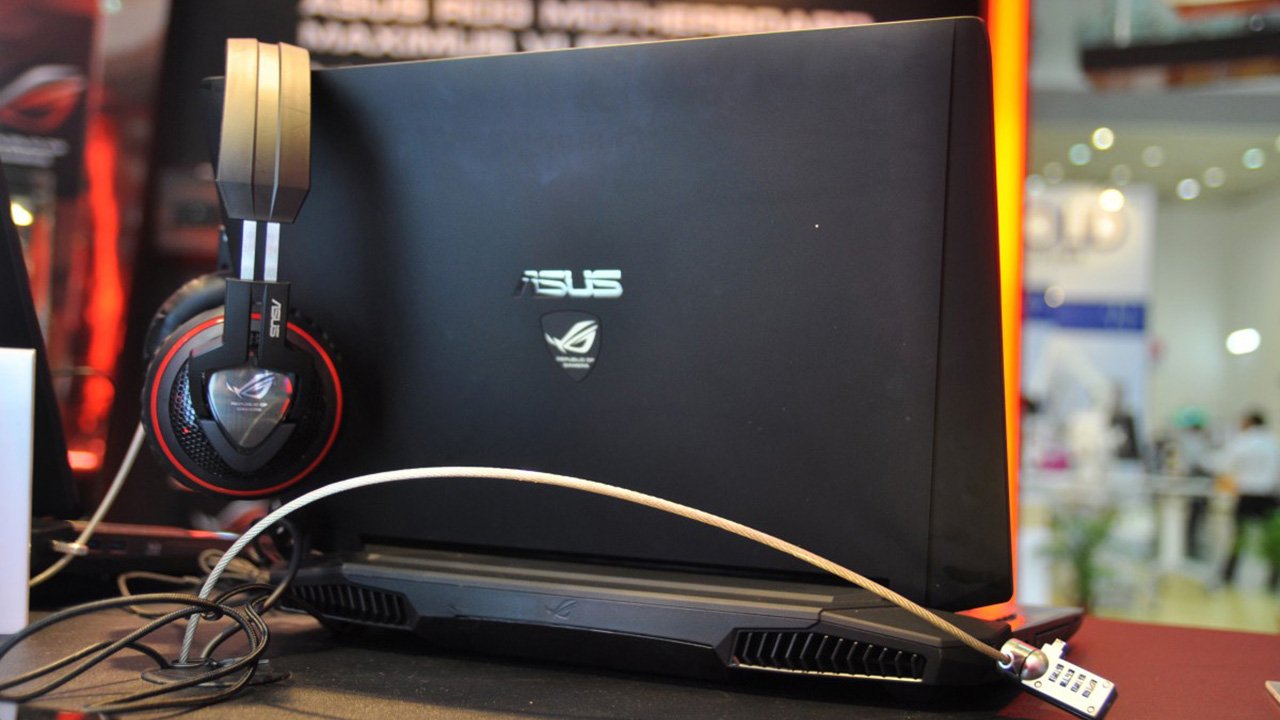 There is one thing that must be made absolutely clear going into this review; this laptop is aimed at a niche audience. It has horsepower and performance that come with a steep price, and few people will be able to justify spending over $1000 just to be able to play Witcher 2 on maximum resolution at high settings. BUT, if you fall into that particular small demographic, you just found your latest, greatest toy.

Asus has a new line of laptops that fall under their Republic of Gamers brand, so, unsurprisingly, the focus of this hardware is on running games in their optimal mode. The latest iteration in this brand is the G750 which comes with a couple of variants; the more expensive version with solid state drive, 16 GB of RAM and an NVIDIA GTX 770 graphics card, and the review model we received, which has no SSD, 12 GB of RAM and an NVIDIA GTX 765M. The review model we evaluated weighs in at about $1400 on average at most retailers while the premium version costs about $1900.

Obviously, the G750 isn’t the only option out there, and this laptop is a response to the already impressive strides that Alienware has been making with their gaming laptops. The Alienware 17 has already made some waves with the power under its hood as well as its nerd-chic industrial design. In terms of sheer performance, it still doesn’t have anything to worry about from the lower end G750 we reviewed.

That’s not to say that the G750 doesn’t make a strong impression. Like its rival, it has a 1080p, 17.3” anti-glare screen, and this thing is a marvel to look at. It’s easier to view from multiple angles under less than pristine lighting conditions and will garner looks from anyone breaking this thing out in public. Of course, that’s also because this laptop is also HUGE and heavy, and its design is based on the F-22 stealth fighter, so while Alienware covers the cyberpunk aesthetic, Asus has the military fetishists covered. Sliding this metal mammoth onto the average café table to watch a video or check e-mail garners the same “That’s a bit much” reaction as breaking out a flamethrower when someone asks for a light for their cigarette. It weighs in at four kg so you won’t be whipping this thing out at a moment’s notice and casually balancing it in one palm while sipping a latte in the other. It’s also a finger print magnet; the brushed aluminum exterior looks great for the first hour, but quickly starts picking up hand and fingerprints once actual usage begins. Without constant, meticulous maintenance, it will never look as a good as the first ten minutes after you took it out of the box. On the other hand, the sheer size of it makes other devices in the room look like poodles or other irritating toy dogs. It may not be the most portable of portables to lug around, but it’s the one that gets all the attention in a room when people see it.

The G750 has all the expected inputs and outputs, with four USB 3.0 inputs, an Ethernet port, headphone and microphone jacks, HDMI, Thunderbolt, and VGA ports. There’s also a SD card reader as well as a Blu-Ray drive. It has a full, spacious keyboard, complete with a numeric keypad on the right, and the quality of the build is high. The Chiclet-style keys are comfortably spaced, and the travel is long, so the G750 is less prone to typos. The keyboard is also backlit, is a welcome feature for anyone that uses it in dim lighting situations (something that occurs far more often than you’d think). It’s also quiet; the fans on the G750 manage to keep the noise level to a minimum, so you’ll have to play in a VERY quiet room to hear them whirring. The actual audio, on the other hand, is a pleasant surprise. The sound on the G750 can be output at high volumes without distortions, and despite the fact that most serious gamers will probably use headphones, the laptop comes built with some decent speakers. The only negative here is that there is supposed to be a subwoofer built into the unit, but it never kicked in a decent amount of bass while playing bass heavy portions of audio, even with something as bass heavy as the battle sequences in The Lord of the Rings Blu-Ray used for viewing.

When it comes to performance, you get what you pay for. Both versions of the G750 are well over $1000, and that means you get a laptop that laughs most of the other models off the stage. This isn’t the kind of hardware used for browsing e-mail, Facebook and cat videos from YouTube to share. The combination of Haswell CPU and NVIDIA GTA 765M graphics card in our review model firmly puts this laptop in the upper end of mid-range performance, and it shows. Being sadistic, the first thing we did was install The Witcher 2, a game notorious for being resource heavy, and seeing how the G750 handled it. It was too much to expect that this would be able to take the game running on “Ultra spec” settings, and it didn’t. It still chugged and was essentially unplayable thanks to motion blur and anti-aliasing. What did surprise was that the laptop, when still kept at the maximum resolution of 1920 x 1080 and dropped down a notch to the “High” settings, was VERY playable. You’ll probably still want to plug in a mouse or a gamepad, rather than play with the included touch pad, but the relatively smooth performance of Witcher 2 at high settings, on a laptop of all things, says a lot about the power of the G750. It also impresses by managing to keep cool despite heavy use. The vents are efficient at handling heat, and it’s possible to play with the unit on your lap without feeling as if it’s going to burn through fabric or skin.

Other games, such as Torchlight II or even the PC version of Saints Row IV, were mere cannon fodder for the G750, deftly eating these games for breakfast with smooth, fast performance. Most PC games will happily install on the G750 and run at high—or better—settings without a hitch. It’s mostly the games with a reputation for being graphics hogs that will start choking the G750, and even then only when trying to max out all the settings. One thing to keep in mind while running the G750 at these levels is that you’ll probably want to keep it plugged in. For normal use, the G750 will operate for about five hours unplugged, but that’s assuming you’re only using it to watch/stream videos, surf, or other normal PC operations. Try running a game and the G750 automatically goes into a power consumption mode that has a severe impact on the performance of the GPU. Reconfiguring these settings to ignore that and play games without any power consumption considerations shortens the lifespan of the battery tremendously. So even though this is a laptop, it’s not one you want to play without a power cable if you mean to use it for more than a couple of hours.

A quick run through Photoshop also made it clear that the G750 is a powerful workhorse for those wanting it to use it for less game-centric pursuits. Brushes with textures and resource heavy filters were quick and responsive with the G750, making it a good unit to recommend for digital artists that need something a little more portable than their usual workstation if they need to work on the go. The F-22-inspired exterior may not scream “industry professional,” but for video editors, digital artists and others that use computation heavy programs for work, the sheer power of this laptop makes it viable. It comes with Windows 8 installed, but of course, anyone not happy about that always has the option to try installing Windows 7 instead, or some other alternative.

In the end, the G750 is an impressive piece of technology, but there’s still a question of “Who exactly is this thing made for?” It labels itself as a gaming laptop, and it certainly excels at that, but pricing it over $1000 and then designing it as a heavy, bulky piece of hardware narrows down its market. The hardest of the hardcore gamers are going to stick to their custom-built desktops or, failing the determination or technical know-how, buy an Alienware rig. Technology enthusiasts will obviously buy anything powerful, but the practical usage of the G750 is still a bit of a mystery. There’s a benefit it to bringing it to LAN parties, but are those even widely held anymore? Some people spend a lot of time on the road, and for a dedicated gamer that travels a lot this may be a decent solution, but at four kg, and 17.3” this is not exactly the most airport friendly laptop to lug around, let alone lugging it to the library or café. But questions about actual practicality aside, what cannot be questioned is the raw power of this thing. It’s not the most powerful gaming laptop available, but it ranks among the top, with good build quality, a great screen and impressive hardware.

It may not be the most portable of portables to lug around, but it’s the one that gets all the attention in a room when people see it.