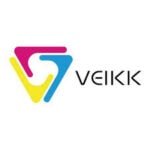 Veikk has made a name for themselves offering a variety of different drawing tablets ranging from more basic versions all the way up to large 22” display tablets. I recently had the opportunity to try out their 11.6” Studio VK1200 model. While on the smaller side, the Studio VK1200 is aimed at portability for users who want to take their drawing tablet wherever they go.

In the box, you will find the Veikk Studio VK1200 itself, the cables to connect the tablet to your computer, 2 drawing pens with cases, several replacement pen tips with removal tool, pen holder, cleaning cloth and even a drawing glove to minimize smudges on the tablet during use. I found this to be quite convenient as it gives you everything you’d want and more straight out of the box. The only thing I found myself wanting was potentially a stand to set the tablet on when not in use.

The Veikk Studio VK1200 drawing tablet has 6 programmable buttons built in to assist with your various drawing programs to make your work more seamless and easier, with the ability to set the keys to specific programs. I found this to be especially helpful as I didn’t have to find myself fumbling around different menus to use common tools. The display itself is a matte 1080p panel and I found it to be quite sharp for such a small display. My only complaint was the lack of brightness in bright lit rooms as the display would occasionally appear washed out or dim.

Using the Veikk Studio VK1200 was as simple as hooking up the USB and HDMI cables to my laptop and pressing the power button. The Veikk Studio VK1200 quickly powered on and my laptop immediately mirrored my screen to it. I personally found it more useful to extend my screen to it as it allowed me to multitask while using it but individual preference will vary per person.

“Being a beginner to using any form of drawing tablet, the Veikk Studio VK1200 made my time of using it much easier in part to its display.”

The pens themselves are built with 8192 pressure levels and made for an incredibly accurate experience and truly felt as though I was drawing on a pad of paper as opposed to an electronic device. The buttons also came with 2 built in buttons which I personally had mapped between a paint brush and eraser for ease of use. While by no means did my experience with the Veikk Studio VK1200 make me a better artist, I did find myself wanting to draw more often, like I used to do in the past.

Being a beginner to using any form of drawing tablet, the Veikk Studio VK1200 made my time of using it much easier in part to its display. I was able to see precisely where I was drawing on the screen and was able to clearly see what I was doing as opposed to other traditional tablets where you have to monitor your use on your computer’s display. I feel most users should have no issues with picking the Veikk Studio VK1200 up and using it with minimal learning curve once properly set up.

With a price tag of over $200, the cost may be a little steep for a beginner wanting to dip their feet in learning how to create digital art. I however feel the price is warranted by not only everything included to get started, but the overall experience the gives the user. Being able to visually see everything you are working on makes the learning curve much easier for a beginner.

For the beginner starting out and learning how to create digital artwork, the Veikk Studio VK1200 offers a great degree of flexibility and makes the experience easier.
REVIEW SCORE
8.5
Buy Online
File Under: Drawing tablet, Studio VK1200, VEIKK