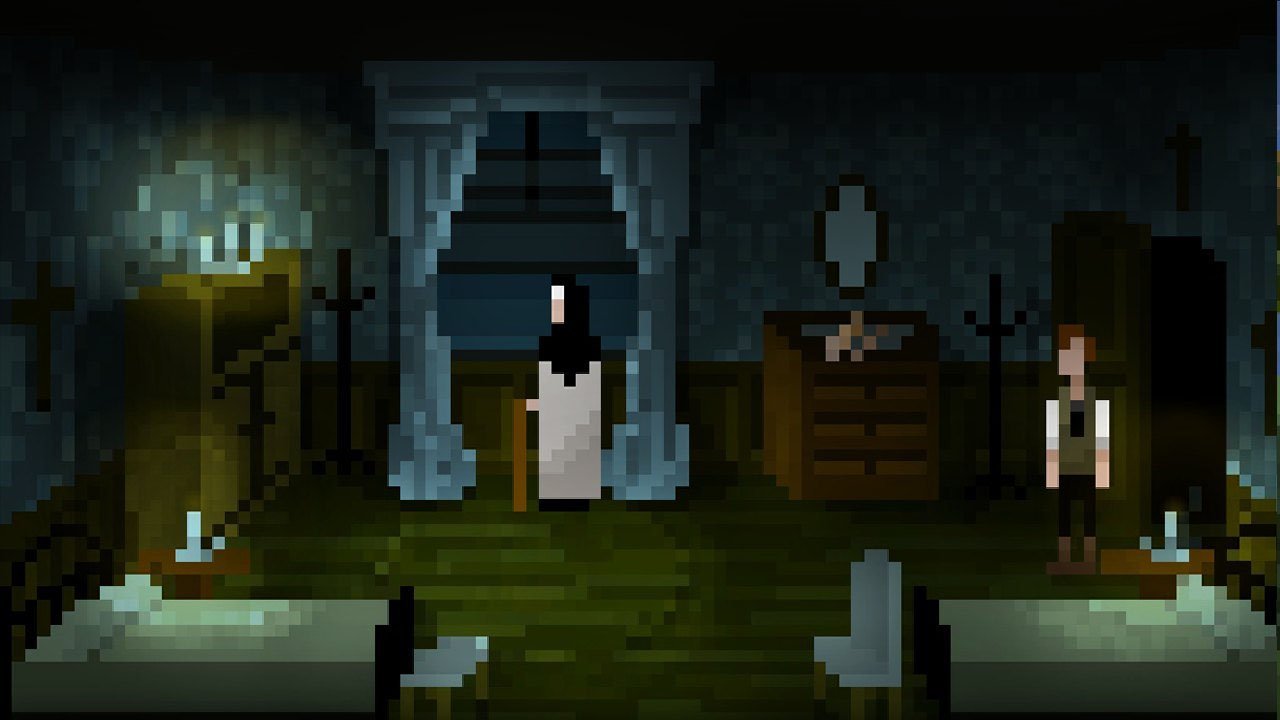 The Last Door’s opening asks the player to take control of a man named Anthony Beechworth as he hangs himself. In between clicking on the only interactive objects in Beechworth’s spare, dimly lit room—a length of rope, a chair, and a ceiling beam—the screen turns black and short white sentences detail the soon-to-be-deceased man’s fear of some nebulously defined horror. Once a noose is prepared and a chair has been kicked out from under him, Beechworth strangles to death. The scene is a horrifying and, to be perfectly honest, gripping introduction to a point-and-click adventure game that is intent on maintaining an atmosphere of melancholy intrigue.

Following its macabre prologue, The Game Kitchen’s The Last Door gives players the role of protagonist Jeremiah Devitt, a former schoolmate of the hanged man who, upon learning of Beechworth’s death, sets out across late 19th century Britain in an effort to discover what could have driven his old friend to suicide. The story doesn’t take long to pick up steam as Devitt quickly finds himself involved in a sinister mystery that sees the repressed memories of his schooldays catching up with the present day in nefarious ways. The Game Kitchen does a good job of revealing the grim secrets at the heart of its plot throughout, offering frequent clues as to the nature of the horror surrounding Devitt and never becoming dull. While some of the prose and character dialogue is clumsily written, occasionally breaking the dramatic effect of an interesting storyline, the pace at which new information is revealed is well handled. Much like a good mystery novel, The Last Door grips its audience by offering fresh clues at regular intervals while still keeping the exact nature of its central secrets close to the chest. There’s a great push and pull constantly at play throughout the game where many scenes reveal just as much as they obscure. Devitt may learn what scared his old friend enough to commit suicide fairly early on, but the process of discovering this information also pulls him deeper into a far less straightforward mystery.

The puzzles that help deliver The Last Door’s storyline are typically satisfying to solve, if not overly difficult. Throughout the story Devitt collects items, combines them in a barebones inventory menu, and uses them at appropriate locations within each chapter’s environment in order to progress. The way to continue moving forward past, say, a locked door or uncooperative character is almost always intuitive due to the logical puzzle design (adding oil and fire to a burned-out lamp allows Devitt to explore a dark passageway in one instance). Only a few of these puzzles require much in the way of outside the box thinking, but The Game Kitchen’s decision to avoid the kind of unnecessarily obtuse solutions typically used to increase adventure game difficulty is definitely a welcome one.

Even during the hardest puzzles, though, The Last Door’s spooky, Victorian environments are hard to grow tired of. The game’s visuals, despite being comprised of large, chunky pixels, are atmospheric. Beams of sunlight filter into mansion hallways through the darkness of boarded-up windows; a run-down London street’s cobblestones seem damp with moisture; the corpse inhabiting a hidden room is placed just centrally enough that it’s impossible to ignore while exploring the small, decaying space. An oppressive atmosphere is maintained across the entire game not just through The Last Door’s strong visual design, but its sound as well. Walking across wooden floorboards causes them to squeak and crack realistically, and hearing faint murmuring from a distant area makes  moving forward a lot more frightening than it would otherwise be. The game is also scored with an exceptional soundtrack, mainly consisting of sombre violins and pianos.

Each of these elements—from the urgently paced plot to the impressive aesthetic—add up to make the first season of the game a dark and intriguing entry point to The Game Kitchen’s larger mystery. While there may be no shortage of horror-themed games worth playing at present, The Last Door’s approach makes it stand apart as an unique take on the genre.

The puzzles that help deliver The Last Door’s storyline are typically satisfying to solve, if not overly difficult.