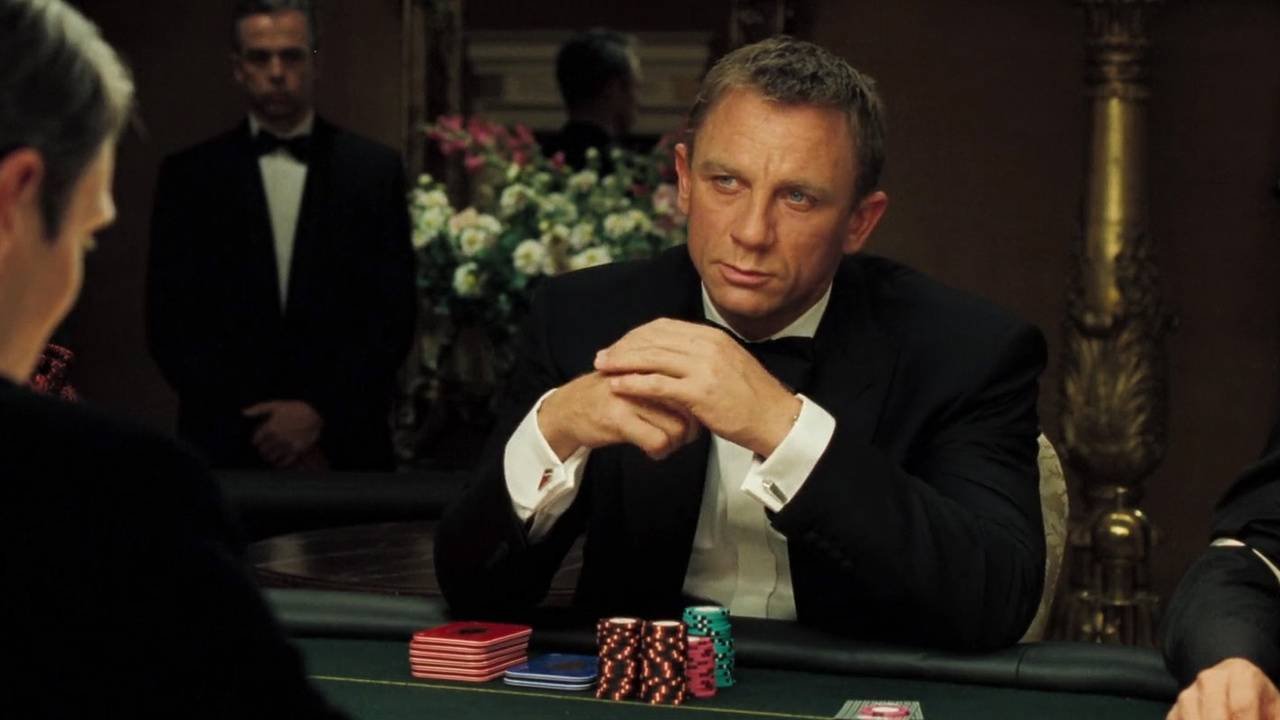 Everybody knows James Bond. How could you not? The guy’s probably more well known then every British cabinet minister combined. But with familiarity comes comfort and a reflex against being bold and trying something new and exciting, and so has it been with Bond as of late. While recent Bonds have made bucks by the buckets, they’d hardly be accused of being the most innovative if even superior entries into the series. So there’s no time like the present for a reboot; after all the pomp and circumstance for 40 years and 20 movies in Die Another Day, and in the wake of highly successful re-imaginings like Batman Begins and TV’s Battlestar Galactica, it was Bond’s turn to be reborn.

Step one: go back to the Ian Fleming novels. Casino Royale was Fleming’s first Bond adventure and the one that set the formula that all others followed. While it had been done for TV in the 50s and a spy spoof in the 60s, it had never been done in the canonical film series. Step two: get a competent director behind the helm, someone who can do action but can also keep eyes fixed to the screen when stuff’s not blowing up. Step three: get a new Bond; some one who is raw and rough around the edges but shows promise and can act.

In the director’s chair is Martin Campbell, the man who made what is arguably the best of the Pierce Brosnan Bonds with 1995’s Goldeneye. In the face of all the glam, blam, and product placement of Tomorrow Never Dies, The World is Not Enough, and Die Another Day, Goldeneye seems oddly restrained by comparison. The scene I loved in Goldeneye is when Bond infiltrates a house boat and overtakes a cabin boy with a handy towel. After the fight is over Bond pats the sweat of his brow with the towel. It was a great move and I can’t honestly say that I’ve seen any little touches like that in any of the Bonds since.

Which brings us to new Bond Daniel Craig, and if your only problem with the man in this role is that he’s blue-eyed and blonde-haired then you need to turn in your license to critique. For good measure, Academy Award–winning screenwriter Paul Haggis was brought in to give the script a ground-up polish.

In a black-and-white prologue, we see Bond dispatch his first two kills that will give him Double-O status; one kill is rather messy, the second is much more smooth. After the appropriately elaborate opening titles, we see Bond working undercover in Madagascar, surveying a bomb maker just hired for a mysterious job. After destroying much of the island to get the bomb maker, M (Judi Dench) chastises Bond for his rash tactics and suggests that his promotion may have come too soon. Never one to take criticism well, Bond follows his own leads to the Bahamas and the arms dealer behind the business in Madagascar.

But all this has to do with a larger plot involving a man named Le Chiffre (Mads Mikkelsen), a private banker that watches over the money of the world’s terrorists. Le Chiffre has bought into a high-stakes poker game at Casino Royale in Monte Carlo using funds borrowed unknowingly from his terrorist clients. If he loses the game, he loses their money and will have nowhere left to turn but the waiting arms of MI-6, who will vent him for every scrap of intelligence. Bond is the best player in the service and, despite M’s misgivings, is assigned to bankrupt Le Chiffre but not without the supervision of Treasury agent Vesper Lynd (Eva Green) because if Bond loses, the British government will have a hand in financing terrorism.

That’s the big spy movie this time out—a much more realistic, down-to-earth story without death rays, hollowed-out volcanoes, and elaborate conspiracies. But that’s not to say that all the action is confined to the poker table. The intricate chase sequence in Madagascar is done in the style of Parkour, the Free Running–style of action made famous in movies like District B13; the producers even procured the services of Parkour co-founder Sebastien Foucan. And although the other scenes can’t really match the pace and intensity of that opening blast, they are no less sleight in production values and are all exciting to watch in their unique ways. In this movie we actually see Bond sweat, run, and get pounded on; he hasn’t perfected his moves yet and is still finding his way.

After seeing all the bile and vinegar thrown at Craig, all I can say to the Bond-In-Name-Only crowd is to find a crow and eat it or at the very least set up an apology blog. Craig gets to construct a character rather than walk into a tailor-made suit weighed down by tradition. Basically, the man can act; he can portray the killer instinct angle, but he’s also comfortable showing Bond with his armour down. Mikkelsen is maybe the best Bond villain in ages because he knows how to be subtle and not overplay his hand, to use the appropriate lingo in metaphor. And of course Green is magic as Vesper; it’s all in her eyes and her attitude and maybe a little to do with the fact that she’s a knee-buckling-gorgeous woman. Even franchise holdover Dench seems reenergized by the changing of the guard, turning some her best and most authoritative work as M.

Some may find a more realistic Bond galling, but I was grooving at seeing 007 work with gadgets you can get in the Sony Store and not Q’s workshop. Much like J.J. Abrams did with Mission: Impossible, Campbell and his team find the heart of the concept again and cuts away much of the things that have constantly been criticized about the more recent films. Then Campbell takes a play from Christopher Nolan’s book by teasing us with a direct sequel coming out of the events of this film, like the Joker playing card at the end of Batman Begins. There’s a real feeling at the end of the movie, when Bond utters some famous lines, that makes you want to see the sequel right there and then.

Of course the drawn-out final act goes on far too long, which is especially jarring given the fact that the first two-thirds were so tightly paced. Campbell even manages to keep the card playing scenes moving at a fairly quickly clip, but it just seemed that it took the filmmakers awhile to get to where they were going. Another gripe is the theme song: “You Know My Name” by Chris Cornell. To be fair, the song isn’t that bad, certainly a vast improvement over Madonna’s “What The…?” theme for Die Another Day, but I think he was wrong for the song. Fortunately, the accompanying animation is some of the best I’ve seen in a Bond film.

Casino Royale is an incredibly good film, not just as a Bond film or an action film, but as a film period; it is great fun to watch. This is the 21st century James Band we’ve been waiting for—shaken and stirred. 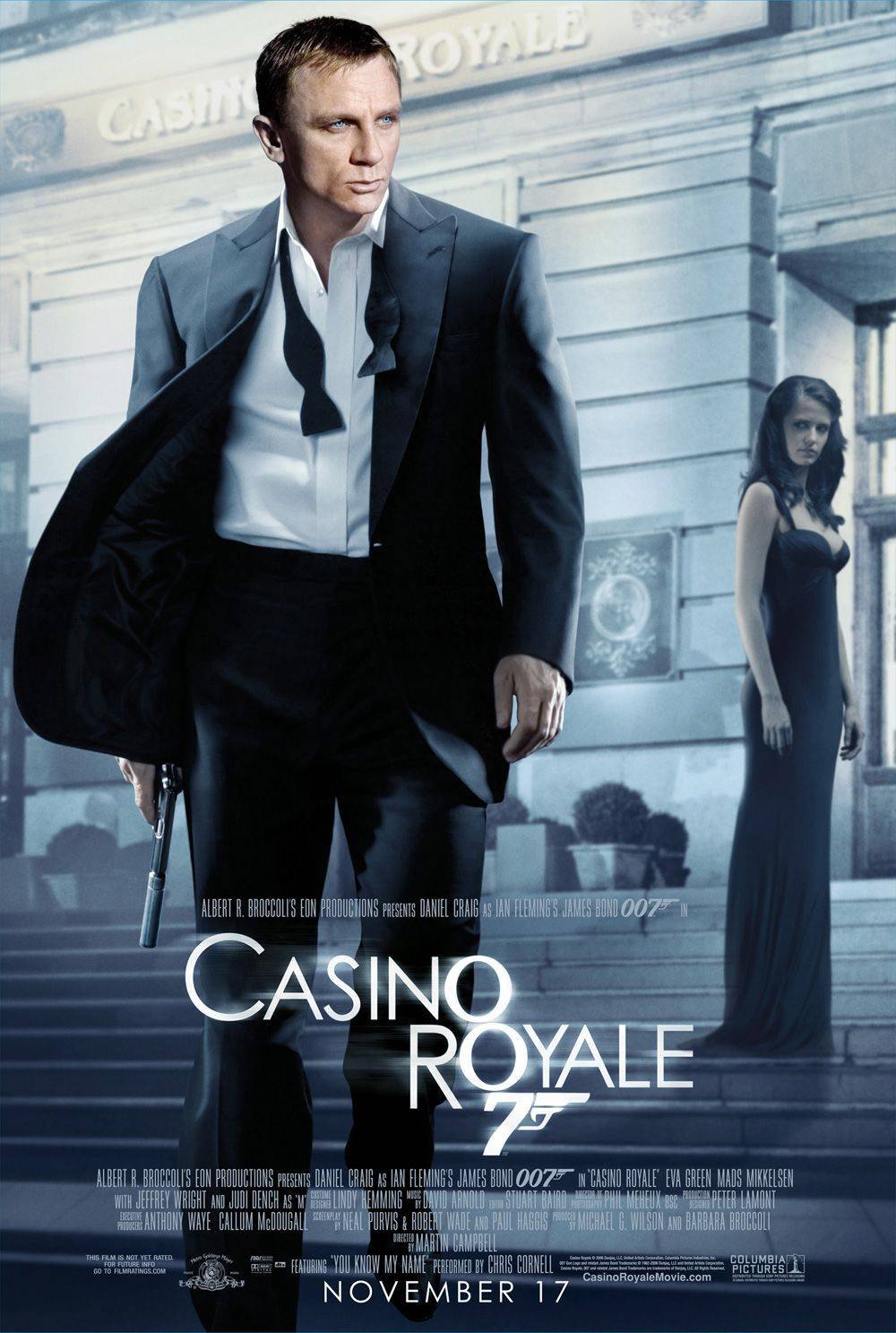