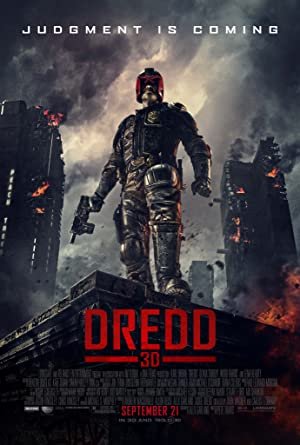 The delightfully fascist comic book “hero” Judge Dredd is a legend in the UK where he’s been headlining the obscenely popular 2000 AD since the late 70s. Across the pond in North America, he’s loved by only a small and devoted cult of trade paperback importers.

If you can chalk that up to anything, it’s the embarrassing 1995 film adaptation starring Sylvester Stallone that tried to turn the subversive antihero into a boring action hero via Stallone’s slurring and what at least Rob Schneider considered to be comedic relief. That movie cheated audiences out of a proper rendition of the character and led people to believe that Jon Wagner/Carlos Ezquerra’s iconic creation was convoluted sci-fi trash. Thankfully screenwriter Alex Garland (28 Days Later) has been nursing along this new Judge Dredd dream project for years, hoping to finally show the world the hyper-violent joys of the one-man judge, jury, and executioner. It’s not a perfect movie, but it is a strong slick n’ sick starting point for what could hopefully be the first R-rated comic book franchise.

For the unfamiliar, Judge Dredd takes place in a not-to-distant overpopulated world where crime has spiraled out of control. This world is divided into a handful of Megacities, where the old world is supplement by massive tower blocks that are housing projects expanded into all purpose 100+ story mini-city slums. The police force can only respond to about 6% of the reported crimes on a given day, so they are all appointed judges with the right to prosecute and kill criminals as they see fit. Dredd is Megacity’s most feared and loved Judge whose gruff exterior seems to come to life only when doling out justice with bullets. At the start of Dredd 3D, our friendly neighborhood badass is assigned a rookie partner in Anderson (Olivia Thirlby in a role ripped from the comics), who doesn’t wear her standard issue helmet because it conflicts with her psychic powers. They decide to investigate a triple homicide at one of the slum towers and soon learn that the psychotic crimelord/former prostitute Ma-Ma (Lena Headey, whose character isn’t in the comics as far as I know, but should be) was responsible and runs the tower. She locks the two judges in the building and assigns her legion of goons to bring them down. Big mistake.

It’s not a perfect movie though. For one thing the central plot device comes straight out of last year’s instant cult hit The Raid and none of the action scenes Garland/Travis whip up have close to the level of ingenuity and impact as what Gareth Evans accomplished. However, to dismiss Dredd 3D as a rip off would be a mistake. For one thing, both movies went into production at the same time and The Raid was just lucky enough to come out first. For another, that action-launching concept comes straight out of Die Hard as well and both films are a clear homage to possibly the greatest action movie of the 1980s. There are other issues that can’t be explained away though. Director Pete Travis was perhaps not an ideal choice. He frames up some of the best 3D imagery since that trend began, but is more of a show off than a stylist. He doesn’t have much of a sense of how to create proper action movie rhythms and grammar, instead creating a movie composed entirely out of beauty shots. Likewise, Thirby’s psychic character seems to only be able to use her powers when it advances the plot and they mysteriously disappear whenever her and Dredd need to be in danger. Thankfully these issues hardly kill the film, they just prevent it from reaching the B-movie masterpiece level everyone was clearly striving for.

What works in Dredd 3D is more than enough for it to be put onto any card carrying comic book geek’s must see list. The iconic character and world are treated with the reverence they deserve. Urban looks, sounds, and moves just like Dredd should, while Garland’s simple story serves the character well. Lena Heady is an excellent semi-surreal sick villain that feels right for this world and the shots/sequences that director Pete Travis gets right are applause worthy (especially when any character takes the designer drug slo-mo, the effects of which are self-explanatory). No prior knowledge of the books is needed to appreciate the movie, though being a fan will certainly make it that much sweeter. It’s a film that genre fans can only hope will be a hit to a) help the cause for an R-rated action movie revival and b) kick off a Judge Dredd franchise. Now that the stage is set, there are literally hundreds of classic tales to explore that would be amazing on the big screen. To name only two, Brian The Killing Joke Bolland’s Judge Death is a terrifying gothic villain who could easily become a cinematic icon and the Apocalypse War storyline would make for an amazing blockbuster (provided the political references were updated, of course). Such sequels would require a massive budget that Lions Gate couldn’t afford this time out, but since they just made roughly a bazillion dollars on The Hunger Games, that could change on the sequels if this sucker is a hit. Don’t raise your expectations too high because the movie is certainly flawed, but Dredd 3D is the first flick to qualify as essential viewing for the comic book world this fall. Finally we have a movie in which the line “I am the law” will get cheers rather than unintended laughter.

For the unfamiliar, Judge Dredd takes place in a not-to-distant overpopulated world where crime has spiraled out of control.
REVIEW SCORE
7
File Under: Dredd 3d, Remake