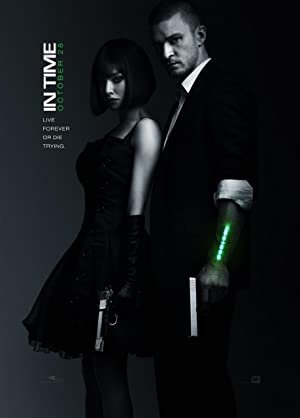 If you’re a fan of science fiction that’s driven by ideas over spectacle, then Andrew Niccol is a writer/director you should follow. He’s one of the few filmmakers around who specializes in high-concept sci-fi and actually gets his films made within the studio system. His most famous titles are the life-as-reality-TV movie The Truman Show (which he didn’t direct) and the genetics thriller Gattaca.

This week, Nichols returns with his thought experiment/action movie In Time, and while the flawed project isn’t exactly his finest hour, the film at least combines interesting ideas with strong action set-pieces in a way that should make sci-fi fans happy. Though far from perfect, it’s definitely worth checking out if you can get past the fact that the film stars Justin Timberlake. And trust me, I understand if that’s too big of a hurdle to overcome.

In Time is set in a world that looks very much like our own, but where genetic perfection has been achieved and no one ages past 25. However, to keep the world from becoming overpopulated with pretty young folks, time has become the new currency. When you turn 25, a clock appears on your arm counting down a year. Jobs pay in hours, and even a cup of coffee will cost you a couple of minutes. This has created a new class system, in which the poor literally live day-to-day while the rich stockpile millennia.

The film stars Justin Timberlake as a have-not who is suddenly given a century by a rich man tired of life. He decides to use his newfound time to take down the system. He travels to the rich area of the world and kidnaps a playboy’s sexy daughter (Amanda Seyfried) to hold ransom for 1000 years, that he would distribute amongst the poor. When that doesn’t work out, the pair set out on a Bonnie And Clyde-meets-Robin Hood crime spree, robbing time from the rich to give to the poor while being pursued by a time cop (played by Cillian Murphy and sadly not Jean Claude Van Damme) who refuses to let the old order be destroyed.

So that’s the concept, and it’s pretty solid one, toying with ideas of immortality, genetic perfection, and most importantly, class warfare. Though the film initially seems like an examination of the permanence of time (and certainly there’s enough “time” related wordplay to nail those concepts into the heads of even the dumbest of viewers), it quickly transitions into an examination of the haves and have-nots, with Nichols making some interesting comments on how the rich exploit the poor and how capitalistic society would probably collapse without economic disparity. The film features some pretty heavy and socially-relevant subject matter, but don’t worry; it’s easy to digest, thanks to Nichols’ on-the-nose writing and an endless series of chases and action sequences.

Nichols has never been a filmmaker known for his ability to stage a car chase before this film, but proves to be surprisingly adept with his set-pieces. The fights and car crashes were all clearly created with actual stuntmen and vehicles, and while the sequences might lack the scale of a comic book blockbuster, they have a sense of physicality rarely seen in films these days that makes them all the more believable. The only thing affecting their credibility is the fact that Justin Timberlake is at the center. I’ve got to give Timberlake credit for transitioning out of music into acting so quickly, and I will admit that he’s decent at the whole acting thing. However, some actors have a level of off-camera fame that makes any appearance in a film feel like stunt casting. Timberlake’s presence in any movie is at least momentarily distracting, but he’s particularly out of place in a film like In Time that’s supposed to be about ideas and not superstar posturing. I suppose his casting is excusable given that the conceit of the movie requires the entire cast to be young and beautiful (something that must have been an asset while gathering funding), but I can’t help but feel that the movie would have been stronger without a pop-star lead. Certainly Cillian Murphy and Amanda Seyfried are less distracting while still impossibly beautiful onscreen presences.

It would be nice to say that the Timberlake’s casting is the film’s only flaw, but that’s sadly not the case. As with most Nichols movies, his “big concept” idea would probably be best suited for a short story and feels a little stretched out in a feature length movie. It starts off as a clever sci-fi concept, segues nicely into an action movie in the second act, and then stumbles towards the finish line. It’s clear that Nichols has no grand argument to make, just a few ideas to explore. So, when he’s trying to wrap things up, he tends to turn previously interesting subtext into glaringly obvious dialogue filled with as many uses of the word “time” as he can think of. Nichols settles into an undeniably disappointing conclusion, and since the happy tone is so out of place with the rest of the film, there is a chance that it was a studio mandate. Still, despite the distracting presence of Timberlake and some wonky writing, In Time is definitely an intriguing little movie worth checking out for anyone hungry for sci-fi with meat on its bones. Just don’t be surprised if some of that meat is overdone

Still, despite the distracting presence of Timberlake and some wonky writing, In Time is definitely an intriguing little movie worth checking out for anyone hungry for sci-fi with meat on its bones. Just donâ€™t be surprised if some of that meat is overdone
REVIEW SCORE
5
File Under: